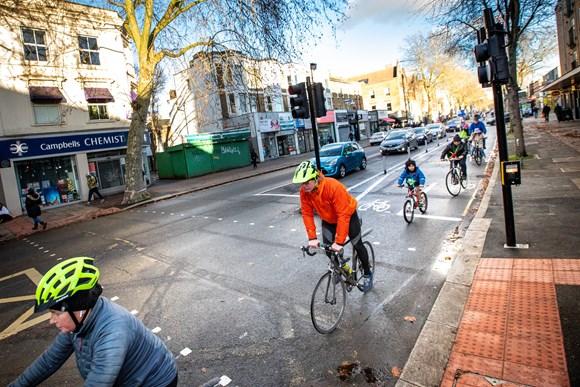 New data from Transport for London (TfL) and Hounslow Council have revealed 72 per cent growth in the number of people cycling on Chiswick High Road since Cycleway 9 opened last December.

The road has also seen a reduction in road traffic casualties and improved air quality – the latter contrary to claims by opponents of the infrastructure that it leads to more pollution.

The trial cycleway is a revised version of plans for the route that were consulted upon prior to the coronavirus pandemic and which received overwhelming public support, despite opposition from a small but vocal minority led by Conservative councillors in Chiswick, which lies within Labour-controlled Hounslow.

Bicycles now account for one in five vehicles on the route, with up to 2,700 people cycling on it, including children and families, with a 72 per cent increase from February to April this year.

According to provisional data from the Metropolitan Police, there have been two collisions involving a cyclist in the first six months since the cycle route opened, compared to eight in the preceding year.

The route will eventually extend eastwards through Hammersmith & Fulham, with construction due to start in the coming weeks, but will end at Olympia due to Kensington & Chelsea’s refusal to allow a segregated cycle lane along Kensington High Street.

An independent survey commissioned by TfL found that 47 per cent of local residents support the segregated infrastructure on Chiswick High Road, compared to 43 per cent who are opposed to it, and Hounslow council is studying whether improvements can be made including putting bus lanes in place to improve journey times.

London’s Walking and Cycling Commissioner, Will Norman, said: “This data shows the huge positive impact cycle lanes can have not only in enabling more people to cycle, but also in reducing road danger and improving air quality.

Simon Munk, Infrastructure Campaigner at the London Cycling Campaign, said: “Cycle tracks like C9 are popular and safer – the evidence on this, despite some controversy, is clearer every day.

“If we want to move rapidly towards a zero carbon transport system, to reduce road danger, pollution and inactivity, to make London a place where kids can cycle to school and grandparents can cycle to the shops, we need more schemes like this.

“It is important tweaks are considered to further enhance the scheme for cyclists and pedestrians and improve bus journey times.”

“But most importantly,” he added, “we hope TfL and councils including Hounslow, Hammersmith & Fulham and Kensington & Chelsea work together to rapidly connect this popular cycle track up to other destinations. Because the climate emergency demands climate safe streets.”