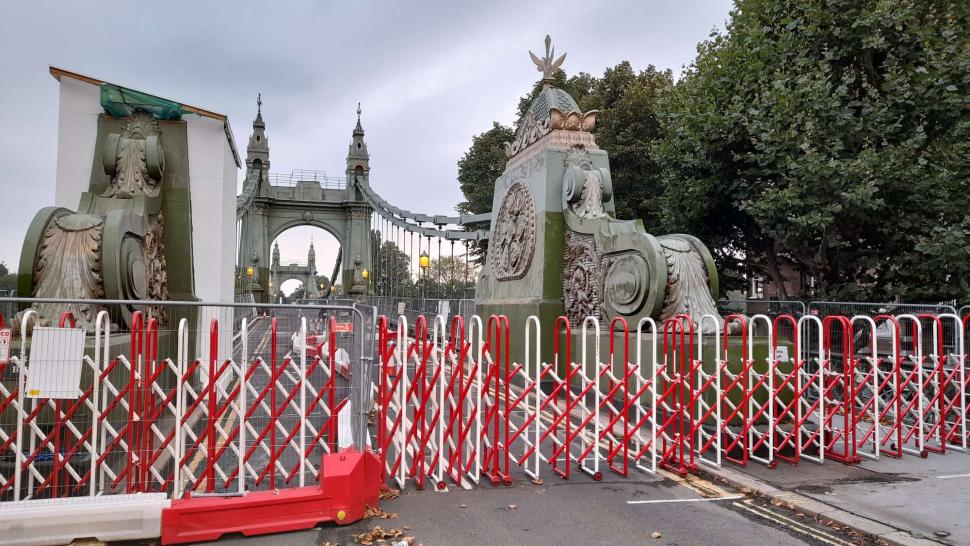 West London’s Hammersmith Bridge, closed since April last year to motor vehicles, has been shut to cyclists and pedestrians this evening due to fears over the safety of the Victorian structure.

Local businesses have told road.cc that they were warned of the closure at around 1pm today by Hammersmith & Fulham Council, with barriers shut at around 4.45pm to prevent people, whether on bike or on foot, from crossing.

One cycle commuter who uses the bridge each day on his commute from Teddington to Mayfair and back, Chris, told road.cc he will now have to find an alternate route. 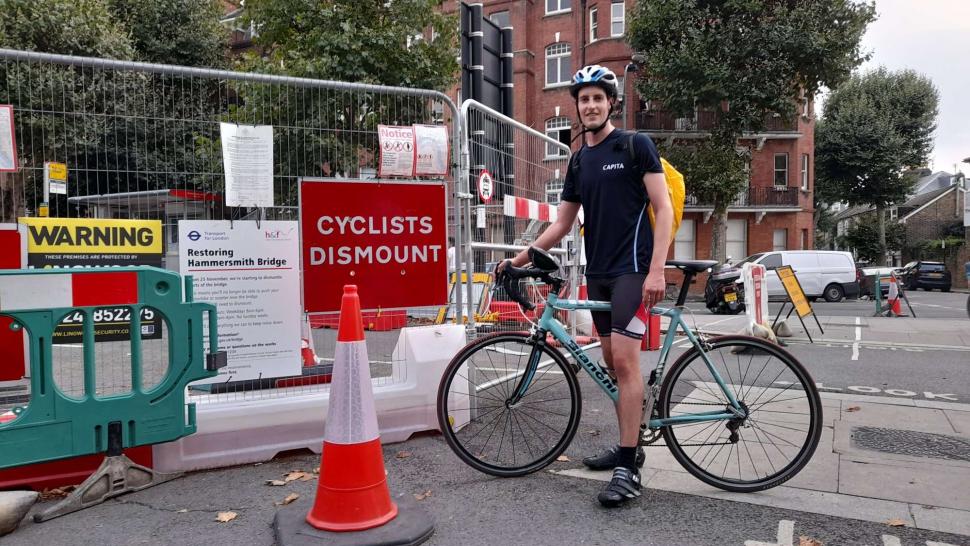 Others lifted their bikes over the fences that are now blocking off the bridge, which links Hammersmith to Barnes and is a landmark on the annual Oxford and Cambridge Boat Race.

The closest road bridges either side of Hammersmith Bridge are Putney Bridge to the east and Chiswick Bridge to the west, although for cyclists headed in that direction, they can also carry their bikes up and down the steps and use the footbridge that runs along Barnes railway bridge. 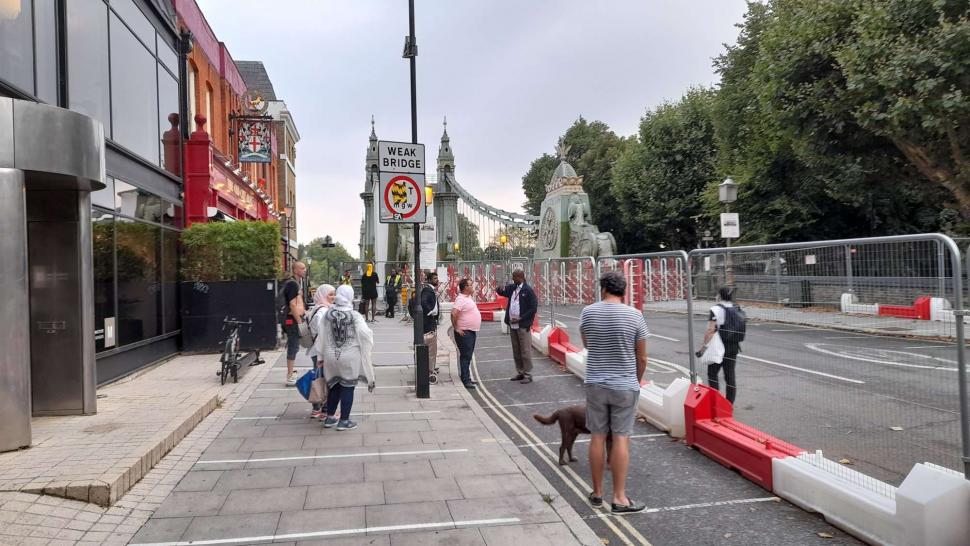 Transport for London (TfL) has previously indicated that it supports installing a temporary bridge for cyclists and walkers while Hammersmith Bridge is repaired, but rejected an alternative proposal for a bridge for motor vehicles to be installed alongside the existing structure while works are carried out.

The Grade II listed suspension bridge, which was opened in 1887, was closed last year after cracks were discovered in the pedestals which support it.

Since then, the bridge which links Hammersmith & Fulham on the north bank of the river with Barnes in the Borough of Richmond upon Thames on the south side, has only been open to cyclists and pedestrians – until this evening.

Clearly the closure, which we understand is due to concerns over cracks on the northwest pier, has confused many users of the bridge given the short notice, itself an indication of how great the concern must be over the structural integrity, 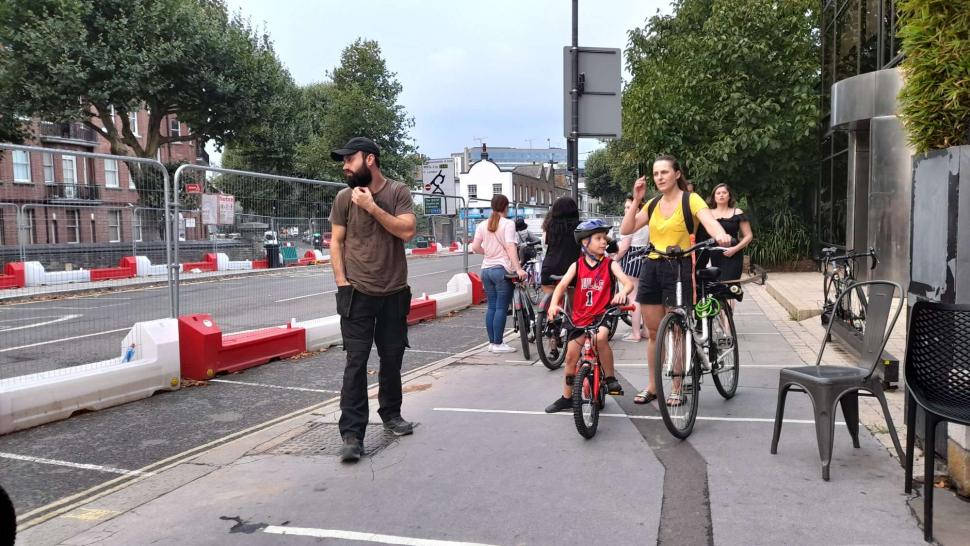 In a statement, the London Borough of Hammersmith & Fulham said: “Hammersmith Bridge is closed to pedestrians and river traffic from 5pm today (13 August) because of an increased risk to public safety due to a sudden deterioration in key parts of the suspension structure.

“Specialist engineers have been undertaking 24/7 monitoring of the structural integrity of the bridge throughout using an extensive network of sensors on the 19th century structure. The deterioration in the structure was exacerbated by the recent heatwave which caused cracks to significantly increase – despite measures taken to mitigate the heat.

“The bridge will remain closed until the engineers are confident that it is safe to re-open to pedestrians and river traffic."

The statement continued: “It means that pedestrians and cyclists must now cross the river elsewhere, while all river traffic under the bridge will also be stopped – including the pedestrian walkways under Hammersmith Bridge – while engineers examine the extent of the damage.”

Councillor Stephen Cowan, Leader of the London Borough of Hammersmith & Fulham, said: “Safety is the number one priority. I’m absolutely sure that we averted a catastrophe by closing this 19th century suspension bridge to motor vehicles last year.

“We have some of the best engineers in the world working on this scheme. They advise we now face a similar dilemma. I appreciate how inconvenient this will be to thousands of people on both sides of the river and I am sorry about that, but we must follow the engineers’ advice which is why the bridge will be closed with immediate effect today.

“We will update everyone as soon as engineers have investigated the scale of the recent damage. I have instructed them to find a plan to safely reopen it as quickly as they can.

“Today’s closure shows how much more work is required to get this beautiful bridge fully restored. And we’re – once again – calling on the Government to fund the final phases of the restoration work,” he continued.

“TfL has lost 90 per cent of their revenue during the Covid-19 pandemic. As a direct result, their funding for the on-going monitoring of the bridge and its full refurbishment is now at risk.

“We remain determined that this beautiful bridge will be fit for purpose for generations to come and we’ll continue to do everything within our power to deliver on that,” he added.