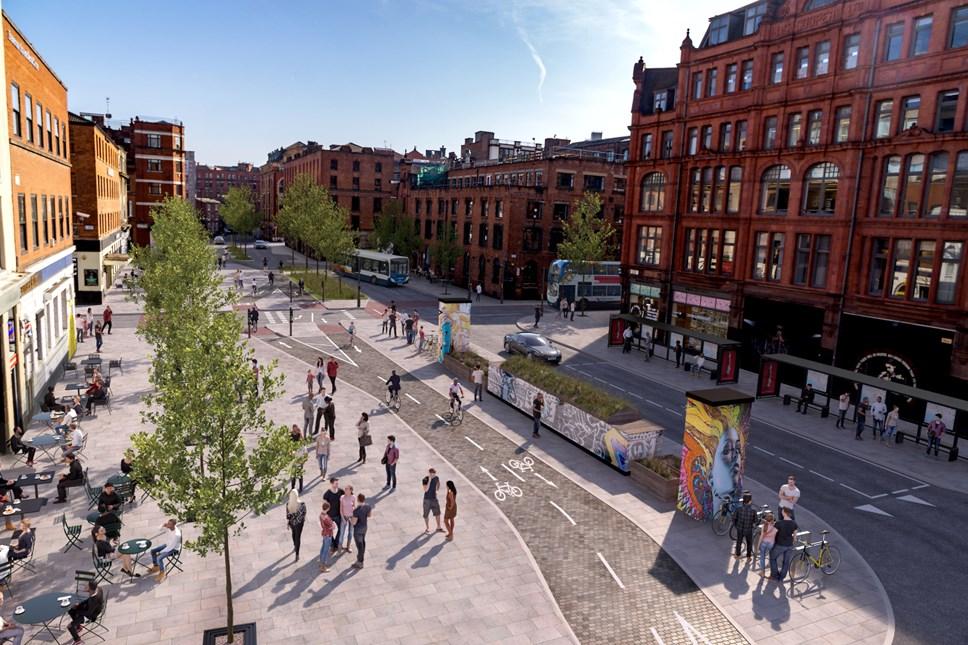 Greater Manchester is to get 55 miles of new cycle routes by the end of 2021 as well as 140 new crossings and the city-region continues its major drive to encourage active travel.

The plans, unveiled today by Mayor Andy Burnham and Cycling and Walking Commissioner Chris Boardman, form part of the Bee Network stretching across all 10 local authorities that make up Greater Manchester.

The pair rode into Manchester together this morning, with their 90-minute journey taking in the Muddy Mile in Wigan, which opened in summer last year and was the first Bee Network route to open.

“It’s been years in the making, but GM’s cycling and walking revolution is finally starting,” said Burnham. “To build the capability and scheme pipeline to deliver a new way of travel for a whole city region has taken us two years, but we are now ready to begin delivery.

“By next summer we will begin to see the fruits of our labour and the region’s residents will finally have the chance to travel to shops and schools easily and safely without using a car.

“Today heralds the real start of our cycling and walking story, coincidentally aligning with bike to school week.

“Next year is going to be incredibly exciting with spades going in the ground. This is a huge step towards making Greater Manchester a true cycling and walking city-region.

“Projects like the Chorlton beeway and Bolton’s new junctions are world-class and they are going to open up cycling and walking as a new option for hundreds of thousands of people.

“Greater Manchester residents have told us that they want safe space to travel on foot and by bike, so this is exactly what we are delivering,” he added.

Greater Manchester’s Walking and Cycling Commissioner, Chris Boardman, said: “We started this mission nearly two years ago and I’m so pleased with the significant work GM’s local authorities have been doing behind the scenes to get this monumental mission underway.

“The Bee Network was a vision; now, having completed the planning, paperwork and many consultations, we are ready to start making it a reality.

“It will create better places to live and work, give those with a car the option to leave it at home and for those who don’t, it will provide them with a reliable, safe and pleasant network to walk or ride to shops, schools and workplaces. This is the beginning of Greater Manchester’s twenty first century transport revolution.”

The city-region also plans to have around 25 miles of pop-up cycling and walking routes in place by next spring and is also introducing low-traffic neighbourhoods in Salford and Tameside, with the latter opening today.

In all, 35 projects are due to be completed by Christmas 2021, with details below.

Bee Network crossings – £2.2 million – a series of new and upgraded  crossings at locations across Greater Manchester, initial crossings due to  be completed during Winter 2020.

SBNI Manchester Road Gateway – £7 million, due to be completed by  Winter 2021 – Full junction upgrades to create protected cycle tracks and  crossings outside Bolton station on Trinity Street and Bradford Street, and  a contra-flow cycle lane on Newport Street.

Crossing point and junction improvements – £2.2 million – a selection  of new and upgraded junctions to improve connectivity and safety for people  travelling by foot and bike, expected to be completed by Winter 2021. Elton beeway – £1.8 million – this scheme will complete a pleasant,  direct route from Bury to Radcliffe via the canal towpath and is expected  to be completed by Winter 2021.

Mancunian Way / Princess Road junction – £3.25 million, due to be  completed in Winter 2020. A full junction upgrade where Mancunian Way meets  Princess Road. The existing subways will be removed and protected cycle  tracks will be created, as well as pedestrian paths and a signalised  crossing.

Manchester to Chorlton beeway (area 2) – £2.2 million, due to be  completed in Spring 2021. The Upper Chorlton Road section of the Chorlton  Cycleway which will create a protected cycle route from Chorlton Park to  Manchester city centre. This section completes the cycle link between the  Brooks Bar junction and Seymour Grove.

Manchester to Chorlton beeway (area 3) – £2.2 million, completion date  TBC following consultation. The Manchester Road to Barlow Moor Road section  of the Chorlton Cycleway which will create a protected cycle route from  Chorlton Park to Manchester city centre. This section completes the cycle  link from Seymour Grove into and through Chorlton district centre with its  many bars, shops and cafes.

Manchester to Chorlton beeway (area 4) – £1.8 million, due to be  completed in Spring 2021. The Barlow Moor Road/Manchester Road section is  the most southern part of the Chorlton Cycleway. It connects the Chorlton  district centre to the National Cycle Route numbers 6 and 60, the  Manchester Cycleway (Fallowfield Loop) and number 62 the Trans Pennine  Trail.

Beswick active neighbourhood (phase 1) – due to be completed in Summer  2021 – A ‘filtered neighbourhood’ to make roads in the area safer and more  pleasant.

Rochdale Canal bridge – £1.3 million, due to be completed in Autumn  2021 – upgrades to the Rochdale canal corridor linking existing and  developing communities. This includes improvements to the canal towpaths,  improved access under a low bridge at Butler Street and improved  accessibility to four sets of steps.

Union Street West bridge improvements – £228,000, due to be completed  in early 2021 – The bridge has already been the subject of a partial  refurbishment. This project will see the refurbishment completed, providing  a replacement bridge deck surface to ensure the best possible level of  service for users.

King Street bridge improvements – £452,000, due to be completed in  early 2021 – Complete refurbishment of an existing pedestrian and cycle  bridge, providing a key link into Oldham town centre from a number of  residential areas to the south.

Swinton Greenway – £4.6 million – This project will deliver a  traffic-free, off-road walking and cycling corridor connecting Swinton to  Monton, plus lots of other links, connecting communities into the route. RHS Links – £2.6 million – This scheme will significantly improve the  on foot and by bike experience in the area, improving access to the new RHS  Bridgewater Garden, Parr Fold Park, Worsley College and Walkden Train  Station.

Gillbent Road crossing – £500,000, due to be completed Winter 2020,  this scheme provides an enhanced crossing for people travelling by bike and  on foot in Cheadle Hulme. It will better connect residential areas,  including access to Thorn Grove Primary School.

Hazel Grove upgrades – £1.1 million, due to be completed in Autumn  2021 – A number of off-road routes to link communities and encourage  walking and cycling.

Ladybrook Valley – £800,000, due to be completed Spring 2021 – Scheme  to complete a ‘missing link’ of the continuous walking and cycling route  through the Ladybrook Valley, connecting previous sections which were  delivered by CCAG. The section is around 1.1km long connecting between  Ladybridge Road and Bramhall Park Road, with an additional spur to Blenheim  Road. The works will provide a surfaced route suitable for cycling, along a  route which is currently a grassy footpath.

Heaton Cycle Links – £5 million, due to be completed in 2021 – A  package of measures to create a series of quiet routes for pedestrians and  cyclists between the Manchester Cycleway (Fallowfield Loop) and the Trans  Pennine Trail at Heaton Mersey.

Cheadle Hulme Crossings Package – £1.2 million, due to be completed in  2021 – The scheme includes three new signal crossings on busy roads in  Cheadle Hulme. This will provide access to the wider walking and cycling  network and better access to local facilities.

Tameside active neighbourhood (phase 1) – Phase one, which is due to  be completed in Summer 2021, includes a package of improvements such as  creating filtered neighbourhoods where people are prioritised over cars.  Upgrades will also be made to traffic free routes and segregated facilities  will be provided for bikes on more major roads.

Tameside active neighbourhood (phase 2) – £1.7 million – A package of  improvements which will include the creation of more attractive, safer and  accessible routes for cyclists.

Urmston active neighbourhood – Phase one due to be completed in Autumn  2021, this major active neighbourhood scheme will significantly improve the  walking and cycling environment in the Urmston area. Interventions will be  community and stakeholder driven and it is expected that they will include  segregated cycle routes, new and upgraded crossings, improved signage,  parklets, school street treatments and collision reduction measures. Five junctions on Talbot Road, including the junction with Seymour  Grove, due to be completed in Autumn 2021. This project involves upgrading  stretches of Talbot Road, enabling a consistent level of service for people  travelling by bike or on foot.

Leigh town centre to Pennington Park – £800,000 – the project includes  a new bridge across the Bridgewater Canal to connect Leigh town centre at  the Loom to new housing development to the south of the canal. There will  be a new safe and accessible route to connect from the new bridge to the  education, leisure and retail facilities at Leigh Sports Village and beyond  to Pennington Flash.

Smithy Brook Road – £1.3 million scheme – This is an improved junction  on the A49, that provides the connecting point for the new A49 Link Road  and the planned M58 Link Road. The proposed scheme will improve traffic  capacity on the network, as well as providing improved cycle and pedestrian  facilities to enhance connectivity and maintain road safety for all users.