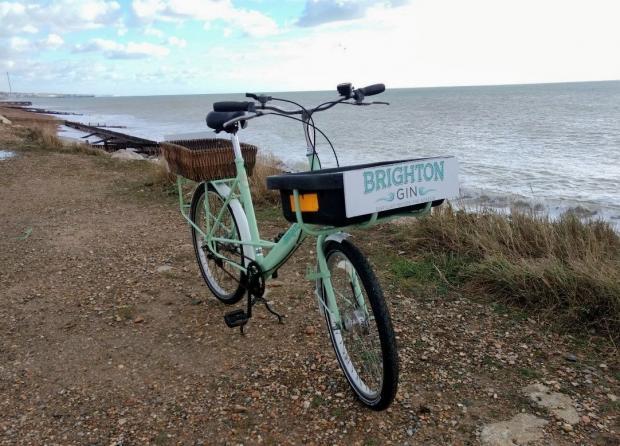 A “gin-based reward” is being offered to anyone who helps reunite a delivery rider with a former Post Office bike now used to ferry juniper-based distilled supplies as well as hand sanitiser to customers in Brighton & Hove.

The bike belongs to Brighton Gin delivery rider Rachel Blake and was stolen from outside a property on Dyke Road at some point between 6.16pm yesterday and midday today, according to a tweet from the company.

Besides gin and other gifts sold by the company, it is also used to deliver hand-sanitiser, which the company began producing last year in response to the coronavirus crisis.

Please help us find BG1! Some rotter has stolen Rachel's #brighton #gin #bike (stolen from Dyke Road), essential for our zero-carbon deliveries. Pls help us find it & if you hear of someone selling a bike with #BrightonGin branding please shout! (Gin-based reward for recovery) pic.twitter.com/eVt5Zfp9fk

Company founder Kathy Caton told the Argus: “One of the reasons we're so gutted about it is it really feels like a kick for a company that's been so committed to zero-carbon deliveries, and that we've also been out on our pushbikes throughout the Covid crisis doing doorstep deliveries not only of gin but not-for-profit community-supporting hand sanitiser too.”

Sussex Police have appealed for the return of the bike, with a spokesman saying: “Police received a report of a bicycle having been stolen from outside a property in Dyke Road, Brighton, at some point between 6.15pm on Tuesday and around midday on Wednesday.

“It is described as being an old, green Post Office reclaimed bike with Brighton Gin branding and a large bucket-type carrier on the front.

“Anybody who has any information which could locate the bike can contact police online or by calling 101, quoting serial 0491.”

The distinctive bike was originally supplied by Pashley to the Royal Mail (it bears strong similarities to their Pronto model).

After decommissioning, the Stoke-on-Trent-based charity Krizewac Project bought up the bikes, donating thousands to Malawi and selling others, refurbished in young offenders’ institutions, helping inmates learn a trade, under the Elephant Bike brand.

You may have come across the brand on road.cc before, complete with Miniature Schnauzer (not included in the purchase price) in the basket.