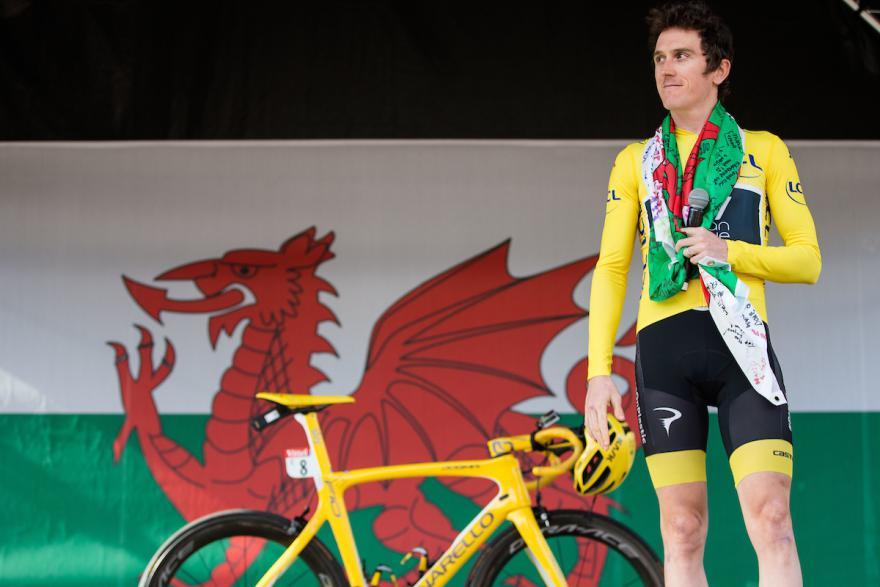 Geraint Thomas gives his tips to people new to cycling

No mention of the "h" word in Tour de France winner's latest GQ column, though some may disagree with his advice on road position...
by Simon_MacMichael

Geraint Thomas has been sharing his tips for people looking to get started on riding a bike in his latest column for GQ Magazine – and as you’d expect from a Tour de France winner and two-time Olympic champion, there is some decent advice in there for novice cyclists, though some may disagree with his thoughts on road positioning and there is no mention of the “h” word.

In normal times, of course, the Welshman would currently be riding in the Tour de France right now and perhaps looking ahead to next month’s Olympic Games on Tokyo. But coronavirus has turned all that on its head, with Tokyo 2020 set to take place in 2021, and the Grand Depart of the French Grand Tour now set for 29 August in Nice.

In the UK, as elsewhere, however, there has been an explosion in the number of people cycling – both for exercise and for daily transport (including commuting – not that you’ll find much mention of that in Thomas’s piece, which seems pitched more to those considering taking to two wheels for fitness. We suppose that when your bike is in effect your office, the thought of riding one to and from work isn’t top of mind.

There’s plenty of sound advice in his piece though, including the importance of getting a bike serviced properly if you’ve bought it second-hand, or if it’s one you’ve had for several years but haven’t used.

And running through the article is the advice to get advice from your local bike shop whether for selecting the type of bike you need, local routes to try out, or the kind of bike which best suits your needs and ensuring the frame size and saddle height are correct.

“There are so many types of bike, from proper racers and road bikes, hybrid bikes, which are a hybrid between road and mountain bikes, and then mountain bikes with the big fat tires that are purely for off-road,” Thomas says.

“What you need to do is decide what you're going to use it for: a hybrid is one of the better ones to go for, but there's also Bromptons that you can take on the train with you. It depends what you need it for. Like I said, bike shops can help you with that as well.

“Just get out and get doing it. There's things you can learn, but the key thing is the set up: make sure you've got the right bike for what you want to do and know the route well, especially if you're new to it. A five-mile detour can be make or break.”

The Team Ineos rider also underlines the importance of correct set-up and pedalling style, saying: “I think a good rule of thumb is you always want the ball of your foot in the centre of the pedal – that's one of the biggest mistakes I see people making while they ride a bike for the first time. It's just so much more efficient. If you're riding with your heel or your arch on the pedal you waste a lot more energy.”

One piece of advice to novice cyclists is to try quieter routes , ones that they have not perhaps noticed before simply because they have not been on a bike, to help build confidence before venturing onto main roads.

“I think in bigger cities there's a lot of bike paths – in Cardiff there's the Taff Trail, which runs along the river – but there are a lot of bike-friendly routes so it's being aware of them. If you're used to public transport or driving a car you don't tend to look at those sorts of things, so you might not be aware of them,” Thomas says.

“If you are starting out, these will help build your confidence before taking on A roads. Bus lanes can be used by cyclists but you will have buses on there, which can be a bit daunting. Plot a decent route to wherever you want to go and if you're in a local bike shop or around other riders, ask to go out with them or ask for a few tips on good routes they know. That's always good, a bit of inside knowledge.”

One piece of advice that does leap comes under the heading, “Etiquette on the road,” where Thomas says: “You don't want to be riding in the gutter, but don't ride in the middle of the road and make it harder for cars to come past.”

While he’s correct that you don’t want to be in the gutter, so as to avoid debris, manhole covers and to other hazards, positioning yourself in the middle of the road – or “riding primary” to use its technical name – is an essential skill that is particularly valuable when road conditions would make it particularly dangerous for a motorist to try and overtake you, such as where the road narrows ahead of a traffic island.

As far as kit is concerned, Thomas says: “Wear reflective materials and have some good lights, especially if riding at dawn or dusk. Just try to be aware of what's around you, give clear signals, stick your arm out – just basic stuff, really. There's nothing really too complicated about it.”

No mention of helmets, then – a debate that a number of pro cyclists have strayed into in the past, including Thomas’s former Team Sky and Team GB colleague, Sir Bradley Wiggins.

“Getting on the bike is a great way to work out and exercise,” Thomas adds. “I ride my bike nearly every day but, even in the off season, those three to four weeks off the bike, after ten days you're itching to get back on it. You feel better for it. I feel lethargic, tired and grumpy and then even getting on the bike for an hour clears your head.

“Whether you're training hard or wanting to improve or just enjoying time with family and friends, it's a great way of exercising.”

Meanwhile, if you are new to cycling, you could do worse than take a look at our piece on beginner mistakes to avoid.