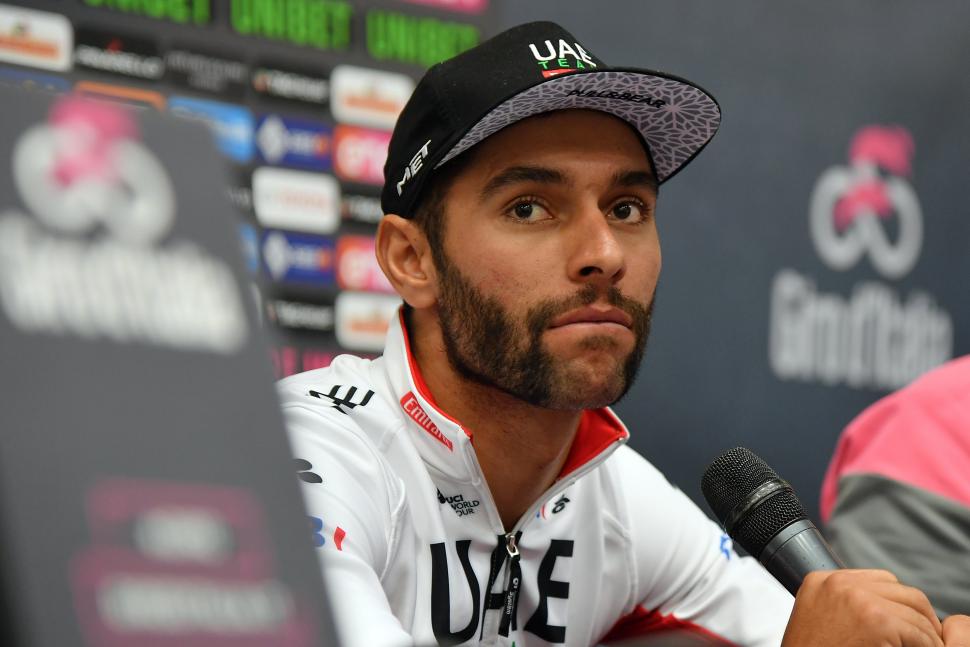 Colombian sprinter was only rider to test positive in latest wave of testing at the Giro d'Italia...
by Simon_MacMichael

UAE Team Emirates sprinter Fernando Gaviria has tested positive for COVID-19 for the second time this year and will not start today’s Stage 16 of the Giro d’Italia. Meanwhile, race organisers RCS Sport and the UCI have confirmed that a staff member of the AG2R-La Mondiale team also tested positive for coronavirus in the latest wave of testing at the Italian Grand Tour, conducted over the past two days.

The 26-year-old Colombian first tested positive for COVID-19 at the UAE Tour in February, one of several cases at the hotel where the teams were based for the race, which was cancelled with two stages remaining, the overall victory going to Adam Yates of Mitchelton-Scott.

Gaviria’s team, and three others, were kept quarantined in the hotel for more than a fortnight while additional tests were carried out, and he subsequently confirmed he had tested positive for the virus.

“All other riders and staff returned a negative test, and will undergo further testing today.

“The team’s medical staff are monitoring the situation closely and doing all they can to ensure the we can proceed safely.

“Gaviria was immediately isolated following the test result and is feeling well and is completely asymptomatic. This is the second time the Colombian has tested positive for the virus, after also having it in March.”

Gaviria is the fourth rider to test positive on the race, following Simon Yates of Mitchelton-Scott and Steven Kruijswijk Jumbo-Visma – both their teams withdrew from the race after last Monday’s first rest day – plus Michael Matthews of Team Sunweb, who has since returned a negative test.

In a joint statement, RCS Sport and the UCI said:

In accordance with the Giro d’Italia health protocol, established as part of the ‘Rules to be followed for the resumption of the road cycling season in the context of the coronavirus pandemic’ drawn up by the Union Cycliste Internationale (UCI), and in compliance with the measures of the Italian Health Ministry, all teams (riders and staff) were tested (PCR control tests) on 18 and 19 October.

A total of 492 tests were carried out:

One rider from UAE Team Emirates tested positive for Covid-19; he was referred to his team doctor who organised isolation measures and took necessary action, in compliance with the World Health Organisation (WHO) rules, concerning contact cases.

One staff member from Team AG2R La Mondiale tested positive for Covid-19; he was referred to his team doctor who organised isolation measures and took necessary action, in compliance with the WHO [World Health Organization] rules, concerning contact cases.

In May, Dr Maria Van Kerkhove, WHO’s technical lead on the COVID-19 outbreak, appearing on BBC’s The Andrew Marr Show, said that someone testing positive twice for coronavirus would not necessarily have been infected.

Instead, she said it might be due to “dead cells” that emerged as the lungs healed.

“Some individuals are they test negative after a week or two or longer, are finding that they are testing positive again,” she said.

Regarding the dead cells, she explained: “It is not infectious. It is not reinfection. It is not reactivation. It is actually part of the healing process that has been captured again as being positive. So that is something really interesting.”

Asked whether people could be reinfected by coronavirus, she replied: “That is a very important question.

“When someone is infectious they develop anti-bodies and they develop part of an immune response one to two to three weeks after infection.

“We do not have the answer to that yet.”

Five months on, medical professionals are still trying to understand issues related to reinfection with COVID-19 and whether immunity helps prevent any reinfection, as addressed in an article published in the journal The Lancet Infectious Diseases just last week.