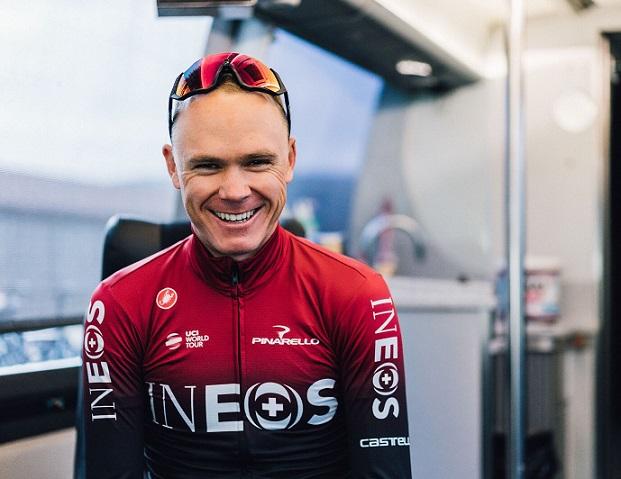 Chris Froome has been talking to followers on Twitter about cycling during lockdown – including the need to maintain distance from others when undertaking outdoor exercise on the bike.

On Saturday, the four-time Tour de France winner retweeted an article regarding a white paper written by academics at universities in Belgium and the Netherlands.

If you are able to walk / ride / run outdoors please read this article on the distance you should maintain from others. It may be more than you think! Better yet (if possible) #StayHome #covid19 https://t.co/Q0QTd0r5QA

As we pointed out in coverage of the same paper last week, the authors said they had taken the unusual step of publishing their initial findings before applying for funding or having their research peer-reviewed because of the urgency of the situation – something Froome himself highlighted when questioned about the article he had linked.

Peer reviewed studies take time. I’m sure we’ll learn considerably more in the future once the scientists have had the time to research it thoroughly.

In fairness to the team that produced the white paper and observations by some that as a non-peer reviewed paper it did not carry much weight, we should point out that the lead academic on the research, Professor Bert Blocken, is a specialist in aerodynamics, including as applied to elite cycling.

Froome, who lives in Monaco, is currently in lockdown at home, with the tiny principality adopting the same approach as France, which entirely surrounds it.

As a result, he is training exclusively at home, as he pointed out to one person replying to his tweet.

On my indoor trainer? We’re not allowed to ride our bikes on the road here at all. I haven’t been out on my bike for the last 3 weeks.

He dropped a hind to another Twitter user that even if rules were relaxed, he might prefer to continue to ride at home for now.

He also showed his appreciation to one follower who works within the NHS.

On my indoor trainer? We’re not allowed to ride our bikes on the road here at all. I haven’t been out on my bike for the last 3 weeks.

Meanwhile, Froome says he is almost back to full racing fitness following his recovery from the horrific crash at last year’s Criterium du Dauphiné.

In an interview on the Team Ineos YouTube channel, the four-time yellow jersey winner said: “The recovery is going really well – I’d go as far as saying it’s pretty much complete.

“I am still doing some exercises off the bike to strengthen the right side that was injured, but I’m back in normal training again and that’s going really well.”

Froome, who returned to racing at February’s UAE Tour, is currently training at home in Monaco.

“It’s going well – I’m staying really busy and obviously I’m doing as much training as I can on the turbo trainer,” he said. “We’re getting through it.”

He was speaking after taking part on a virtual race with other members of Team Ineos yesterday on the online cycling platform, Zwift.

Thousands of fans joined all 30 Team Ineos riders in the virtual race, won by Rohan Dennis with Eddie Dunbar second and Michal Kwiatkowski third. Froome finished in sixth place, but his performance was applauded by team principal, Sir Dave Brailsford.

“It’s fantastic. I was absolutely gripped and it was really enjoyable to watch. Fair play to Rohan – you can see why he’s the world time trial champion. You can see Eddie is in pretty good shape, but I think the rider that caught my eye was Chris Froome.

“That’s a hell of a ride from a guy who is coming back and that’s a great indicator that he’s on track and going to be in the mix when we get back out there on the road,” added Brailsford.