Middlesbrough business owners have spoken out against plans to build a segregated cycle lane outside their shops, claiming it will be a "clear getaway" for drug dealers and shoplifters, as well as stopping customers park their cars.

Plans for a new two-way cycle lane and reduced 20mph speed limits along Linthorpe Road, expected to cost between £1.3m and £2.4m, were approved by the council this week to the dismay of some shop owners.

It will be the second phase of the scheme, with works on a cycle lane between Borough Road and Ayresome Street already underway. Now, the works will be continued between Ayresome Street and Devonshire/Cumberland Road, in a project funded by Tees Valley Combined Authority. 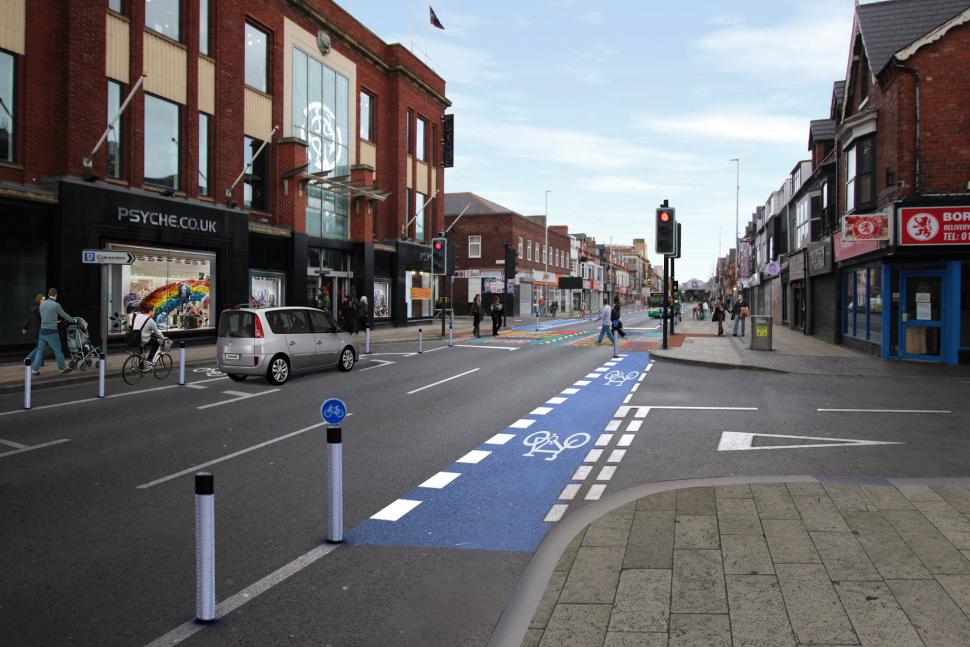 Middlesbrough Mayor Andy Preston urged shopkeepers to consider the ways the infrastructure "could change the environment and way we operate and create a more pleasant experience" for everyone.

However, speaking to regional news outlet TeessideLive, plenty of business owners and workers came forward to criticise the now-approved proposals.

One worker from The Sleep Centre, a bed and mattress shop, said the cycle lane would be a nightmare for their business, and even went as far to say it would give a "clear getaway" to criminals.

"You see drug peddlers along here all of the time. They [council] are just giving people a getaway. All of the shoplifters that go into Iceland and Tesco and park their bikes outside for a second, run in, take whatever it is, and then they disappear.

"So what’s going to happen here is a clear getaway because there will be bollards so no-one can stop them and the police will have a field day trying to catch them."

Another person questioned by the website, but who did not want to be named, expressed concern about the lane being used by drug dealers.

The Sleep Centre employee also raised the most popular criticism of the segregated lanes — they will stop customers parking outside the shops. To accommodate the phase one lanes, 50 parking spaces will be lost, with the council suggesting the 86 spaces in a nearby pay and display car park on Amber Street would be enough to fill demand.

Phase two will see 19 of 42 parking spaces removed, although five disabled bays will remain, just in a new location.

"We could do with more parking spaces but the council is removing them," The Sleep Centre worker continued. "It’s creating a big impact because people are avoiding the area so it’s affecting business already. Turnover has decreased and the number of people walking by has decreased. It’s a very busy road, buses are struggling to get through. People are double parking just to take goods inside to shops…and they have no choice."

Lisa Ellis, owner of florist Daisys and Edwinas, said cyclists are a "nuisance" who are "always in the way".

"It’s older people who it will probably affect most who need to park outside. It might make it awkward for them," she said. "People are just a nuisance on bikes, they’re always in the way."

Another local shop worker added: "Our customers will have to park further away and if they park on the streets behind here they won’t have a car when they come back."

In reply to parking concerns about the phase two lanes, the council advised another nearby car park with 102 spaces is currently underused and could meet demand.

Mayor Preston told the council's executive meeting "nobody will be unable to park."

"I personally get some emails on this matter of cycle lanes, certainly, they are not popular with shopkeepers for a few reasons. The way I think of it is that it might make it a little bit more difficult for some of their customers to park sometimes, I do think it could change the environment and the way we operate and create a more pleasant experience for those who shop and it might get more people out over time.

"Keeping existing cyclists safe is obviously critical and important, encouraging new cyclists is great too, for their mental health and physical health. There will always be resistance, partly because it’s change and people don’t like change and partly because it will make parking for some people a little bit more difficult sometimes but nobody will be unable to park."

Shopkeepers do not appear convinced, however, with the co-owner of The Art House saying he does not see many cyclists on the route and "to lose any more spaces would not be good for business."

Despite this he did express support for building cycle lanes, just not when it impacts his customers' parking: "I think there should be cycle lanes, it doesn’t really concern me, it’s just a parking issue for customers. I don’t oppose it."

A store manager at Abdul's Cash and Carry added: "We are going to find it very very difficult to get the trucks in and unload the trucks. It’s a struggle as it is.

"We were the first cash and carry and we have been there for a lot of years and now there are several cash and carry there, all selling the same products, we are all fighting against each other just to get trade. Now we have got these bicycle lanes coming down."

Mr Halif said the changes would cause "chaos".

Work on phase one of the project began at the end of February and is expected to be complete by early summer.

In response to a public consultation, over 80 per cent of respondents said they travel to the area by car, taxi or motorbike, with a little over 10 per cent saying they cycle.

More than 70 per cent said they did not support the proposals, with a similar figure saying it would be bad for business, and 40 per cent saying the segregated lane was unnecessary.