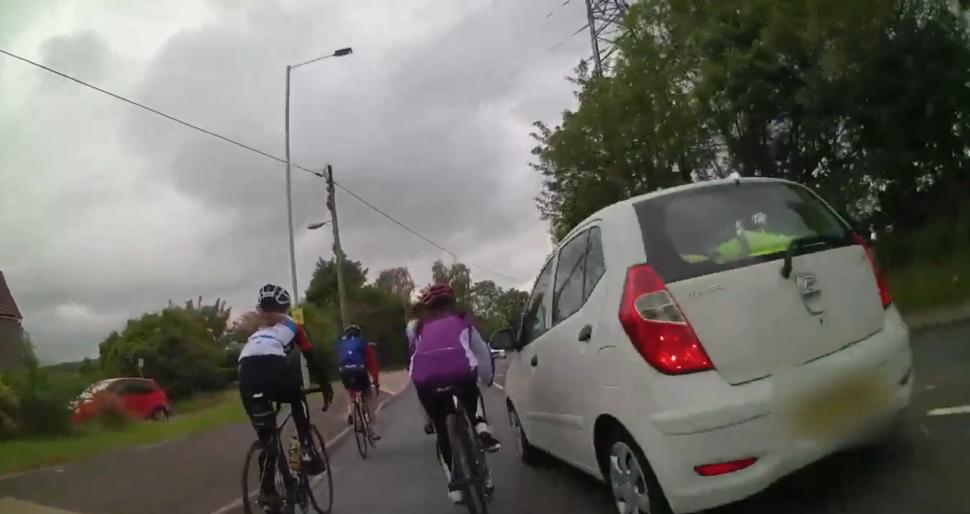 Driver fined £400 after almost crashing into group of cyclists

A driver has been fined almost £400 and given nine points on his licence for a 'careless' close pass on a group of cyclists.

The impatient motorist was trying to get past the riders as they approached a traffic island.

One of the cyclists even had to swerve to avoid being hit as the driver sped by on the A4054 in Pontypridd, Wales.

On the 18th August a motorist pleaded guilty to an offence of driving without due care and attention at Cardiff Magistrates Court where they received a fine of £386 & 9 penalty points. This footage was submitted to #GoSafe via #OperationSNAP. Read more: https://t.co/zykOTcYj4n pic.twitter.com/8KLSc4K2c0

GoSafe, which aims to ensure safety on Welsh roads, said the manoeuvre 'severely increased the risk to the safety of the cyclists involved'.

The motorist pleaded guilty to driving without due care at Cardiff Magistrates' Court, where he received a fine of £386 and was given the maximum amount of points you can receive for that offence.

Teresa Ciano, GoSafe Partnership Manager said: "We all have a part to play in keeping our roads safe for everyone.

"Careless close passes, like the one recorded in this incident, risks the safety of cyclists.

"The consequence of this careless incident reflects the seriousness of the offence.

"We all share the road and should be able to do so confidently. When approaching a cyclist, be patient and wait until you can overtake safely."

While this latest incident is clearly a step in the right direction, road.cc recently reported on the fact that Gwent Police confirmed cyclists who experienced a close pass and submitted video footage, may themselves face prosecution if they are heard swearing or seen acting aggressively.