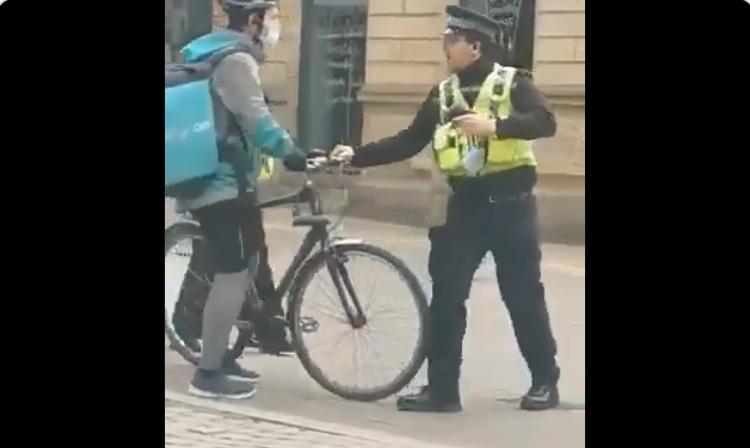 A Deliveroo ​rider who has been delivering food and medicine to people in York during the lockdown has spoken of how he was fined for riding through the city centre by a “confrontational” police officer who also grabbed his bicycle.

The Independent Workers Union of Great Britain (IWGB), which represents people working in the gig economy, says that Ethan Bradley is one of several couriers handed £50 fixed penalty notices in the city on 18 April, reports Yorkshire Live.

He said: “I was absolutely shocked by the confrontational behaviour of the officer who stopped me.

“He not only grabbed my handlebars and threatened me with arrest if I did not give my details, but by not using protective equipment put both myself and my customers at risk.”

Footage of the incident was posted  to Twitter by the York branch of the IWGB.

.@iwgb_clb York couriers demand better treatment and access while carrying out their vital key worker roles during the #covid19 pandemic and less treatment from law enforcers like this: 👇😨👎 @NYorksPolice pic.twitter.com/QxkAjPCOo6

The union, which says that the fine effectively cost Mr Bradley a day’s wages, said that York City Council had given “confusing guidance” that appeared to indicate that restrictions on cycling in pedestrianised parts of the city centre had been suspended – something the council denies.

A council spokesman said: “Whilst food delivery couriers may be classed as essential services and key workers during the pandemic, this does not extend to a relaxation of traffic regulations for these services.

“Discussions were held early on in the pandemic about the practicality of relaxing the traffic restrictions in the central area.

“However for the reasons that became apparent when the bollards were not put in place for a period (increased traffic and higher than desirable speeds) it was decided that the restrictions should remain for the safety of those who still use the city centre on foot and could reasonably expect the area to be vehicle free.”

A spokesman for North Yorkshire Police said: “Although the city centre streets are currently very quiet due to the lockdown, this does not mean that pedestrianised areas can be used by cyclists and other vehicles.

“North Yorkshire Police is not responsible for lifting or imposing these restrictions, this is a council matter, but if cyclists and drivers are breaching the restrictions police can enforce them.”

In its letter, the IWGB also underlined the key role that couriers are playing during the ongoing crisis.

“Day in, day out, couriers are delivering food and groceries to those people self-isolating and the many thousands in York adhering to the stay at home instruction directive of the UK government,” it said.

“At a time when the strength of community bonds is relied upon, York’s couriers are volunteering to deliver groceries and hot meals for the NHS workers and prescriptions to those at highest risk from COVID-19.”