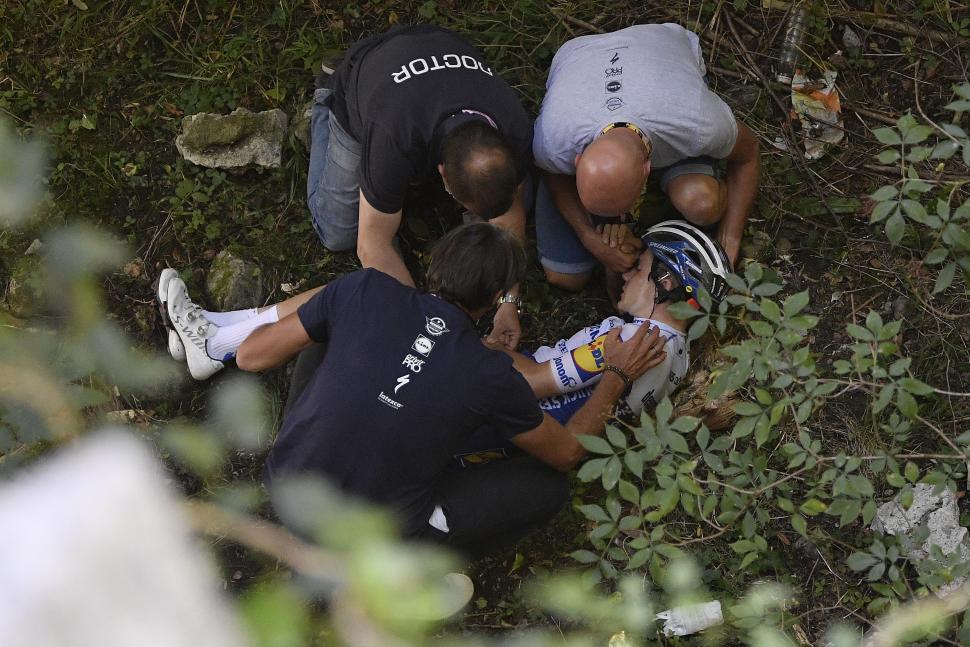 Deceuninck-Quick Step has sought to put an end to speculation over what one of its sports directors took from Remco Evenepoel’s pocket after the Belgian rider plunged over a bridge parapet at Il Lombardia two weeks ago, fracturing his pelvis. The team was responding to reports that the UCI has requested the Cycling Anti-Doping Foundation (CADF) to investigate the incident.

A video posted to Twitter earlier this week showed Davide Bramati retrieving the item from Evenepoel’s jersey pocket following the crash before medics arrived, with suggestions that something untoward was going on.

UCI wants to know what Bramati took out of Evenepoel's pocket after his #iLombardia crash and starts an investigation https://t.co/Pfip3phYeC pic.twitter.com/nwClxZlzNQ

He said that there were also concerns about remarks made by Bramati following the crash, who said he knew it had happened immediately because Evenepoel’s “data had stopped.”

Lappartient said: “The sports director said he thought Evenepoel had fallen as no more data was being sent.

“What data are we talking about then? After all, it is forbidden to send certain data,” he continued.

“So, we are also looking at that point. If it is only about geographical position then it's something else, but sharing other data is not allowed.”

La Gazzetta dello Sport reported earlier this week that Bramati had told the newspaper that he removed energy gels and a bar as well as a small bottle and a radio from the rider’s pockets because he was aware that Evenepoel would be put on a stretcher.

In a statement released this morning, Deceuninck-Quick Step said: “We would like to clarify that we have been contacted by CADF earlier this week to discuss the incident surrounding Remco Evenepoel’s crash at Il Lombardia earlier this month.

“As has already been stated publicly, the item that was captured being removed from Remco’s pockets was a small bottle containing nutrition products and was removed in order to help him to be placed more comfortably by medical staff on the stretcher. We have reiterated this to CADF and we will continue to cooperate with their enquires if needed.

“With regards to the transmission of data, we would also like to clarify that data such as live location is transmitted by the Velon device that was installed on bikes during Il Lombardia by Velon in partnership with the race organiser. The devices allow everyone, including the fans, to track and see rider data live in the race.

“We are confident that this will put an end to any further speculation surrounding the incident,” the statement concluded.

1
Cyclist reports four close passes to police... and is told he could be prosecuted
2
Olympics: 'Medical tape' row as record-breaking Danish pursuit team accused of bending UCI rules
3
Updated: Snapped handlebar that caused Australian rider to crash in men’s team pursuit was made by Bastion Cycles, brand confirms
4
Team GB says Denmark Olympic team pursuit squad should be banned over use of medical tape on legs and "aerodynamic undervest"
5
Five cool things coming soon from Boardman, Bryton, Megmeister, Hindsight and Sigr
6
Father of two nearly killed in collision urges people to 'think about the hurt they could cause'
7
Chef grabs hammer during road rage argument with 17-year-old riding side by side with dad
8
TalkRadio slammed for holding poll asking 'Are cyclists a danger on the road?'