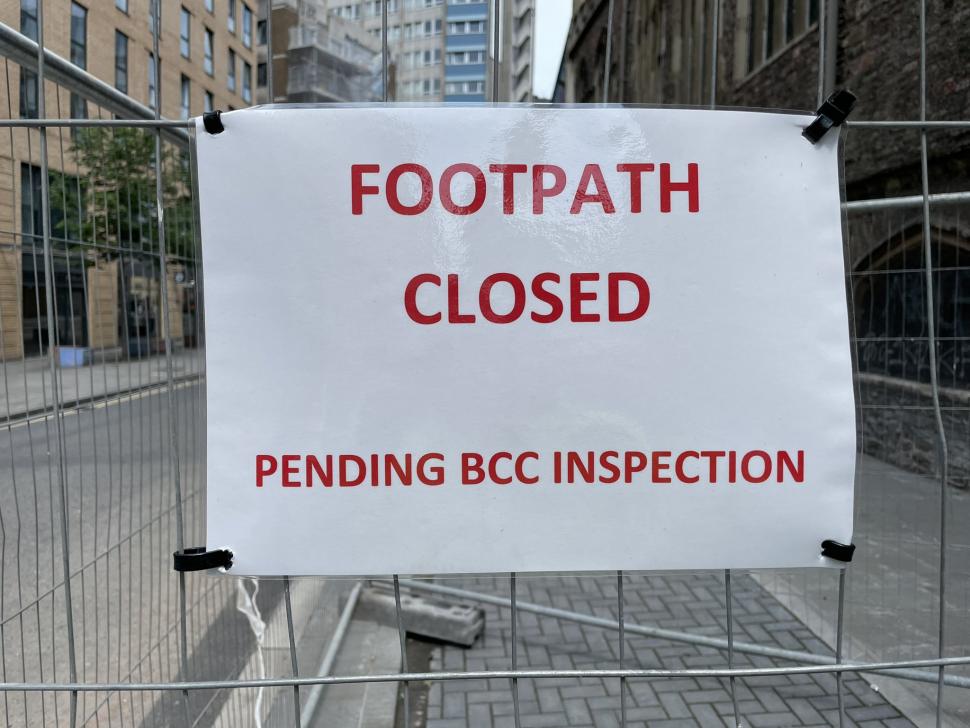 "Omnishambles" cycle lane fenced off just one week after opening

The "dangerous" new contraflow cycle lane on Nelson Street in Bristol had been heavily criticised during its one week in operation...
by Dan Alexander

A new cycle lane in Bristol labelled "dangerous" and an "omnishambles" by users has been fenced off just one week after it opened.

For the brief period it was in operation, the contraflow infrastructure on Nelson Street pushed cyclists into the same area where pedestrians walk on the footpath, with an apparent lack of clear signage and segregation.

In addition to this the entrance to the lane is at a sharp angle, and directs riders into the path of a street light, with the lack of clarity made worse by parts of the footpath still being fenced off for works — further squeezing pedestrians and cyclists together.

Martin Booth, editor of Bristol news website Bristol24/7, noticed the lane had been fenced off once again over the weekend and said he is still waiting for a response from Bristol City Council about "how such a dangerous piece of infrastructure had been allowed?"

The new cycle lane and footpath on Nelson Street has now been fenced off. When it opened just over a week ago, I asked Bristol City Council how such a dangerous piece of infrastructure had been allowed. I am still waiting for a response. pic.twitter.com/Zldalx8Q3a

Mr Booth has been sharing thoughts and video of the bike lane since it opened, describing it as an "omnishambles" and the decision to close it as "sensible" as it was "completely unfit for purpose". Bristol 24/7 shared the following video on its YouTube channel...

Last week, the council's cabinet member for transport Cllr Don Alexander suggested they had been limited by space in this instance: "The aim is to produce the best possible scheme with the space available. If we could start with unlimited space then of course all modes would be segregated. That rarely happens in Bristol."

> "Too ridiculous": Cyclist reports motorist for driving on the pavement... and is threatened with fine for 'cycling on the footpath'

This is not the first time Nelson Street infrastructure has caused cyclists a headache. A temporary lane built in 2014 was branded "silly" by the Bristol Cycling Campaign as it zig-zagged past trees and other obstacles, similar to the bizarre Leith Walk cycle lane in Edinburgh.

The temporary lane was installed during building work, and a council spokesperson admitted it was "not ideal".

In summer 2020, Bristol's mayor Marvin Rees said he would be "taking bold action to create a better, more connected future for everyone and to help Bristol emerge from this crisis in a more inclusive and sustainable way."

"The pandemic has had huge impacts on our usual travel habits and, despite its challenges, we saw air pollution levels drop by almost half during the months of lockdown with big increases in walking and cycling," he said.

"We want to capture those benefits and protect the long-term public health of the city as well as the viability of our public transport services that provide real value to our communities.

"This next phase will strengthen the new schemes and we will be talking to communities across the city to determine the next steps for creating more liveable neighbourhoods that are free from traffic congestion and pollution."

In 2019, a forum post on road.cc outlined issues with another previous version of the street's cycling route. "The contraflow used to be up on the footway (separated by a painted line) [as it appears to be now] but there are building works, so they've moved it out as a contraflow painted lane on the carriageway instead," road.cc reader brooksby wrote.

"Except I'm not convinced that they've told any of the bus drivers, nor have they considered actually enforcing the double yellow lines along there."