Number of cyclists killed on British roads up 40% in 2020

The number of cyclists killed on Great Britain’s roads rose by 40 per cent during 2020, according to figures released today by the Department for Transport (DfT). It attributes the rise to greater distances being cycled – but the charity Cycling UK believes poor driving is behind the increase.

Cycling UK believes that the increase is in line with a rise in reported poor behaviour by motorists – despite a reduction in total motor traffic during lockdown, a number of police forces highlighted an increase in ‘extreme speeding’ and other types of bad driving – and is urging the government to address that issue through the Police, Crime and Sentencing Bill which is currently going through Parliament.

From the end of March onwards, after the first national lockdowns came into effect in England, Scotland and Wales, there was a huge rise in cycling, whether for permitted daily exercise or key workers switching from public transport to two wheels for their commute.

The DfT says there was a 46 per cent increase in the aggregate distance travelled by cyclists on Britain’s roads last year, meaning that “despite an increase in pedal cycle fatalities, there was a slight (4 per cent) reduction in fatality rates for pedal cyclists and a much larger reduction in the pedal cycle casualty rate of 34 per cent between 2019 and 2020 – as casualties did not increase by as much as cycle traffic.”

Total cycling casualties, including slight and serious injuries, fell slightly from 16,884 in 2019 to 16,380 during 2020, resulting in a 34 per cent reduction in casualty frates per billion kilometres cycled.

Cyclists were the only category of road user to see an increase in fatalities during 2020, which the DfT attributed to lower levels of motor traffic during lockdown. 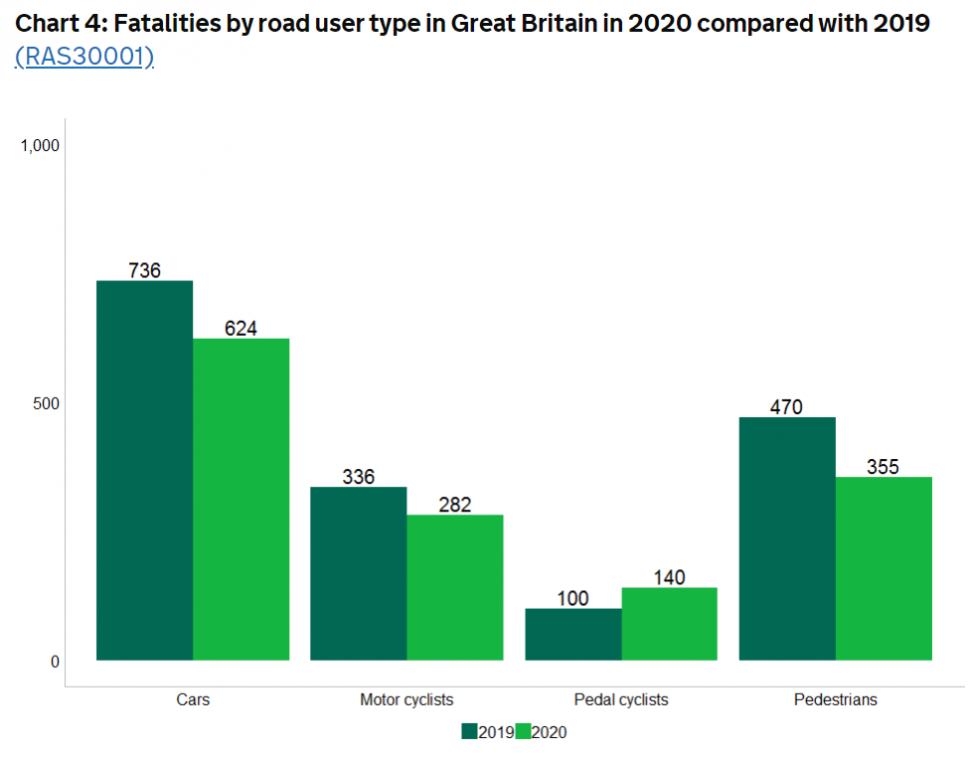 In a separate release today examining the impact of lockdown on reported road casualties, the DfT said: “Pedal cyclist casualties of all severities fell by 8 per cent in 2020 compared to three-year average for 2017 to 2019. However, this reduction varied by severity. Serious and slight injuries fell by 1 per cent and 10 per cent, respectively. However, the percentage of fatalities rose by 40 per cent.

“The change in pedal cyclist casualties also varied throughout the year. In August, September and December, there was an increase in casualties compared to the three-year average for 2017 to 2019.” 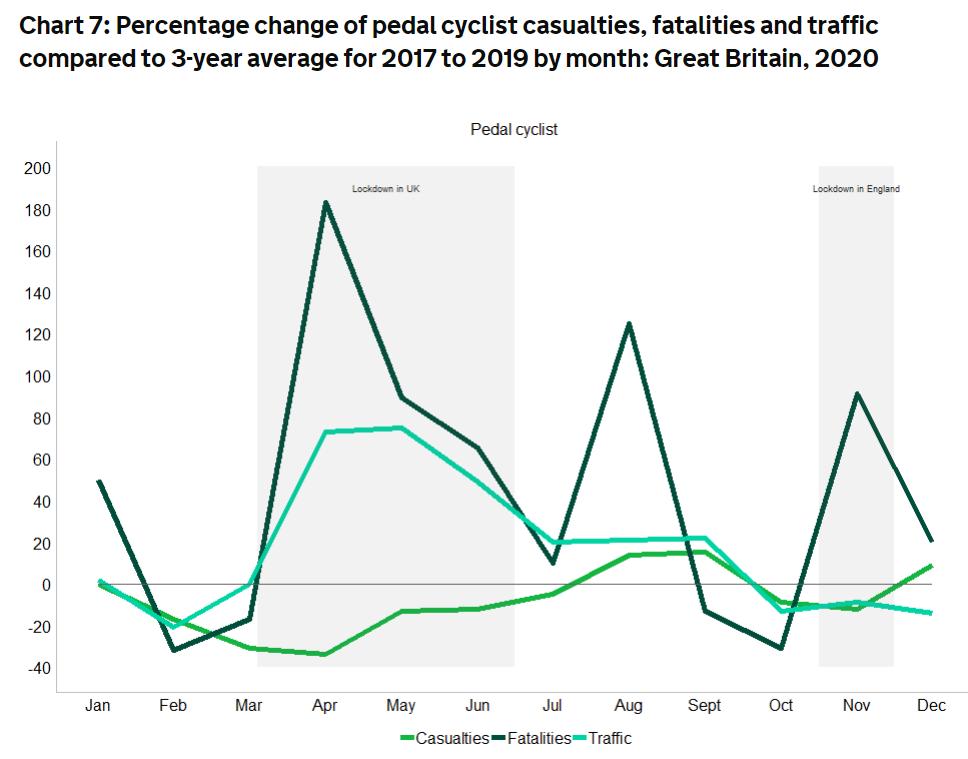 The DfT added: “This may be related to the travel restrictions imposed. For example, ‘people should aim to reduce the number of journeys they make where possible. If they need to travel, they should walk or cycle where possible, or plan ahead and avoid busy times and routes on public transport’.”

Duncan Dollimore, Cycling UK’s head of campaigns said: “Tragically, quieter roads during lockdown were taken advantage of by some drivers, with many police forces reporting an increase in speeding and dangerous driving.

“This has to be dealt with better by our legal system, which is why Cycling UK is calling on MPs to support amendments to the Police Crime and Sentencing Bill to fix the fatal flaws in our road traffic laws, including longer driving bans for those who put other road users at risk.”

The national cycling charity highlighted that it has produced a short report identifying what it terms “five fatal flaws which we want to see closed, which we believe the bill should address.” Those are: