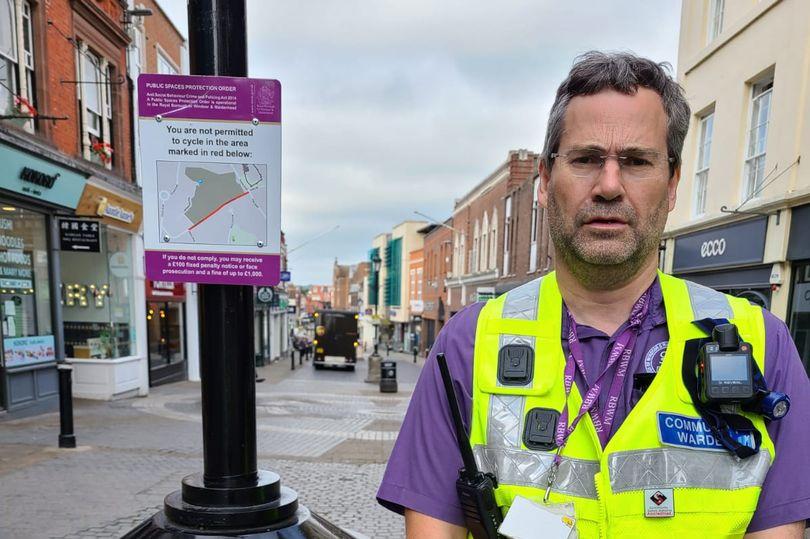 Cyclists could face £1,000 fine if caught riding in pedestrianised zones

Cyclists could be at risk of fines of £1,000 if they are caught cycling down two Berkshire streets.

Anyone caught will get automatically get a £100 fixed penalty notice and risk the higher fine if they go to court.

The Royal Borough of Windsor and Maidenhead's community wardens have been patrolling pedestrianised no-cycling zones in Maidenhead and Windsor to raise awareness of the new order, Berkshire Live reports.

Their new enforcement powers mean they can tackle cyclists who don't dismount.

The new approach is part of the council's 'proactive stance' against anti-social behaviour.

The Public Spaces Protection Order (PSPO) was introduced after a public consultation showed 'strong community support' for the proposal.

The council has warned that while wardens can't be everywhere at once, they will carry out 'targeted spot checks' and undertake targeted enforcement days to support community safety.

Councillor David Cannon, cabinet member for public protection and parking, said it is important all road users follow the rules.

He added: "while most cyclists are responsible, we will use enforcement powers under the PSPO to respond to community concerns and tackle the behaviour of a few who ignore the no cycling signage in these zones, don’t dismount and risk pedestrian safety."

"Over the last week, our community wardens have been speaking with cyclists to make them aware of their new powers and warn that anyone caught ignoring the no cycling rule will get a £100 fixed penalty notice."