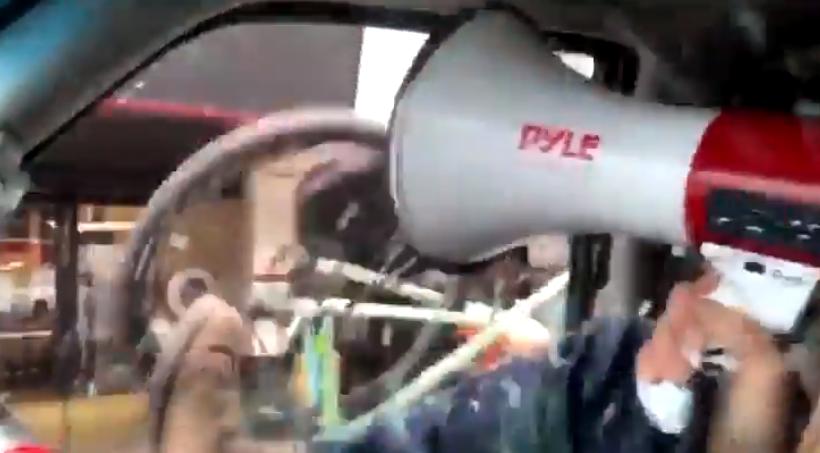 Anti-mask campaigner had been leaning out of the window haranguing passers-by with a megaphone. The rider may face charges for his actions
by Simon_MacMichael

A Vancouver cyclist ​who used his bike to smash the window of an SUV taking part in an anti-mask rally and from which a conspiracy theorist was haranguing passers-by may face criminal charges.

The incident, on the Canadian city’s Main Street, happened on Saturday 27 March with footage shot from inside the vehicle going viral on social media.

Greatest video ever! Obnoxious MAGA anti-masker spews disinformation on a bullhorn out his window, and a guy on a bike just wasn’t going to have it. pic.twitter.com/7t0lyLTbLy

Anti-mask protester Alex Lasarev, using a megaphone, sarcastically congratulates people for “following the narrative and trusting the news and not questioning anything.

Toronto-born Lasarev, who spent some time on the UK stand-up comedy circuit, continued his tirade, saying: “There’s definitely not a psychological operation happening when you’re convinced of a reality that’s based on fear that has nothing to do with what’s actually happen – ”

At that point, a man stepped forward and pushed away the megaphone, telling Lasarev to “Shut the f*ck up!”

The pair traded insults as the man put up his bike and pushed it towards the vehicle, with Lasarev continuing to address people on the street.

Three more heaves of the bike followed, the final one shattering the vehicle’s passenger window, which at this point had been closed electronically.

CTV News reported that Lasarev had previously featured in an online video in February shouting at employees of a camera store who had refused to serve him due to the fact he was not wearing a mask.

It added that Vancouver Police has recommended that charges of mischief and assault with a weapon be brought against a 52-year-old man in connection with last weekend’s incident.