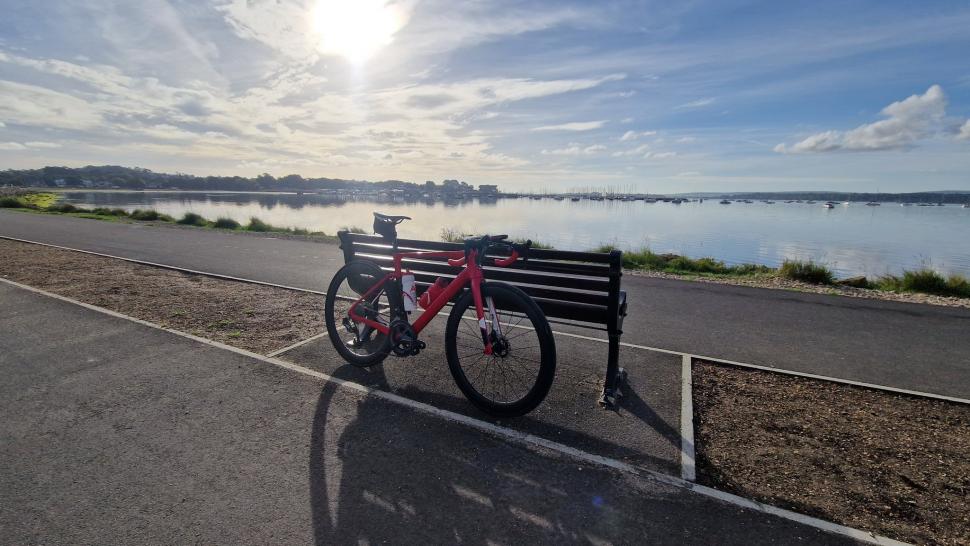 “Why on earth would I want to cycle on a waterlogged path?” Cyclist blasts new harbourside bike path

A cyclist has criticised a new harbourside path in Poole, claiming that it is susceptible to flooding and is constantly “covered in debris”.

Earlier this year, Bournemouth, Christchurch and Poole Council (BCP) redeveloped the popular path from Whitecliff to Baiter, introducing a new segregated cycleway for people on bikes, which the council says will “create a safer environment for those travelling on foot or by bike”.

A public consultation on the project saw 88 percent of respondents call for separation between those walking and cycling, prompting the council to settle on a minimum separation of least 1.5m for the majority of the proposed route.

At the consultation stage the most controversial aspect of the proposal was the cycleway’s placement on the harbour-side of the route – 72 percent objected to this aspect of the plans – causing the council to switch the locations of the footpath and cycleway (though a last-minute petition to relocate the cycle path away from the waterside entirely failed).

> Petition to move cycle lane because cyclists will ride too fast

However, while many cyclists have praised the new path, describing it as “a beauty” and claiming that it will help encourage locals, especially children, to ride their bikes in the park, others aren’t as impressed.

One local cyclist told the Daily Echo that the path’s position has made it susceptible to flooding and that cyclists would be “better off” riding on the adjacent footpath.

Alluding to a photograph published by the Echo showing a significant section of the cycleway covered in water, while the footpath remains largely dry, the cyclist said: “You’ll notice that the cycle path, on the right, is flooded and covered in debris which is likely to cause punctures, whereas the pedestrian path is virtually dry and clean of debris.

“This is repeated in several sections along the new path. There doesn’t seem to be any provision for flooding, and the groundwork seems to work against the camber of the path and water run-off. I [have] watched several cyclists trying to avoid the lake.”

The cyclist, who did not wish to be named, continued: “As a keen cyclist, why on earth would I want to cycle on a waterlogged path, full of debris and risk having to renew inner tubes and even tyres, getting soaked in the process? I’d be better off cycling on the clean and dry pedestrian path.”

Responding to the complaint, a BCP spokesperson told the Echo that alternate routes though the park were considered during the consultation phase but that a desire to be sympathetic to the area’s green spaces meant that the waterfront paths were preferred.

“Earlier in the year we completed the installation of the widened footpath and cycle lane at the popular Whitecliff Recreation Park in Poole. This has created a safer route for people to walk and cycle,” the spokesperson said.

“We are aware that some small sections of the cycle path have been flooding at times of heavy rain and high tidal waters which has also spread some debris onto the path.

“We are currently arranging for further earthworks to be carried out to address the issues. However, due to the recent wet weather, this work has been challenging without causing further damage to the field. We have also organised for the path to be cleaned in these areas.”