Decision said to have been taken "for safety of all road users" to prevent build-up of vehicles coming from motorway slip road...
by Simon_MacMichael

Glasgow City Council has defended its decision not to reinstate traffic cones that afforded a degree of protection to cyclists on a temporary bike lane on a busy road and is now described as a “massive safety hazard for people on bikes.”

But the council says that the cones will not be put back, citing “the safety of all road users” since it believes doing so would lead to traffic queues building up on a slip road from the adjacent M77 motorway.

It also highlights that the cycle lane, which links two parks, was a temporary measure introduced to help people travel safely to parks to undertake their daily exercise under the lockdown rules in force in Scotland at the time.

But video posted on Twitter today, and featured on our live blog earlier, shows how removal of the cones has rendered the bidirectional bike lane on Dumbreck Road impossible to use for cyclists travelling north, since they are faced with oncoming traffic.

The section of the Dumbreck Road trial has been missing protection for a week now and is a massive safety hazard for people on bikes. It needs fixed ASAP @AnnaLangside @GoBikeGlasgow #paintisnotprotection pic.twitter.com/rkjv5BT4ll

To be clear. This lane was initially coned off. The cones have now been removed at this section perhaps due to the danger of left hooks at the end. A redesign with ASL and protection is needed, not a removal of the protection.

The lane, which is close to an entrance to Pollok Park is also extremely hazardous for those travelling south due to the drivers turning onto the road from the M77.

In a statement published on its website today, Glasgow City Council defended the decision to remove the cones.

It said: “At the start of the COVID-19 lockdown, the Dumbreck pop-up cycle route was installed temporarily as part of the Spaces for People project, to link Pollok Park and Bellahouston Park. At this time, parks played a key function in providing outdoor space for people to enjoy daily exercise.

“Following an incident on the M77 last week, traffic was diverted off the motorway and a section of the cycle route between the M77 and Mosspark Boulevard removed, to manage this.

“When reviewing reinstatement, as traffic levels have recently risen, there are concerns of queuing back on the northbound M77 slip road, as one lane was removed on the slip road to implement the scheme. For the safety of all road users therefore, the section of the cycle route between the M77 and Mosspark Boulevard will not be restored.

“Further works will be carried out today on the transition from the carriageway back onto the shared footway to ensure that all users understand the layout,” the council added.

“The temporary cycle lane remains in place between Haggs Golf Club and the M77 slip road.”

It’s not the first time that section of the road has been coned off, however. Here it is back in April 2017 on Google Street View, when the left-hand lane was closed to traffic, presumably due to roadworks. 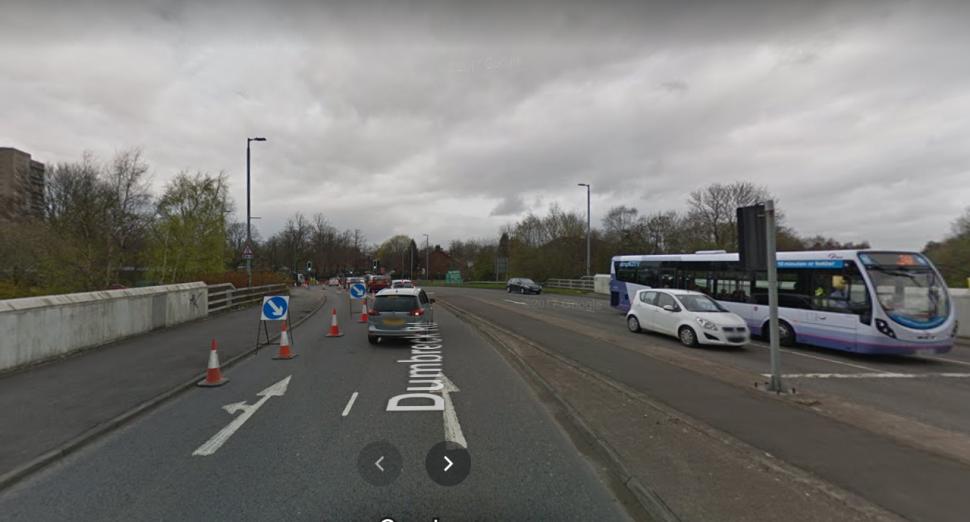