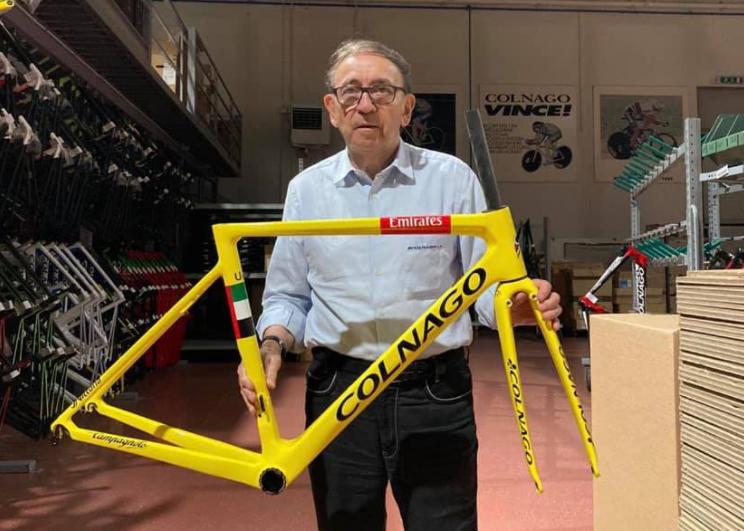 Ernesto Colnago has revealed that he and Eddy Merckx were both in tears as they spoke to each other over the phone immediately after Tadej Pogacar’s sensational time trial win on La Planche des Belles Filles at the Tour de France yesterday which saw him take the yellow jersey from Primoz Roglic.

While five-time Tour de France winner Merckx did at times ride frames built by the Italian when he was his mechanic at the Molteni team, they were badged with the Belgian’s own name – so remarkably, today marks the first time a Tour de France winner-in-waiting has ridden into Paris on a Colnago-branded bike.

And what a striking bike it is – the 88-year-old Colnago, who earlier this year sold a majority stake in the business he founded in 1953 to UAE-based Chimera Investments, personally checking over the yellow VR3s frame before it was rushed to Paris for Pogacar to ride on today’s closing stage.

Speaking to Tuttobici after following yesterday’s stage on TV, Colnago said: “I won some [editions of the Tour de France] with Merckx. Eddy was the first to call me, we were both crying over the telephone.

“Tadej is a member of the family, brought through by Andrej Hauptmanm [the former pro cyclist who is now Slovenia’s national coach], and highlighted by Fabrizio Bontempi to [UAE Team Emirates manager] Giuseppe Saronni, who was very good in putting him under contract when he was still an amateur.

“Then we did our own bit, but he gave us so much more; this is one of the most wonderful talents I’ve ever seen. And I’ve met a few champions in my lifetime.”

Colnago added: “For the time trial I let him have a brand new white frame, and he told me in the morning: ‘If I go as I think I will, it will entertain you and then you’ll have to do some more work, because you’ll have to change the colour for me’.

“All I could reply to him was, ‘I’m already happy like this’, but I didn’t know that the real joy would come a little later.”