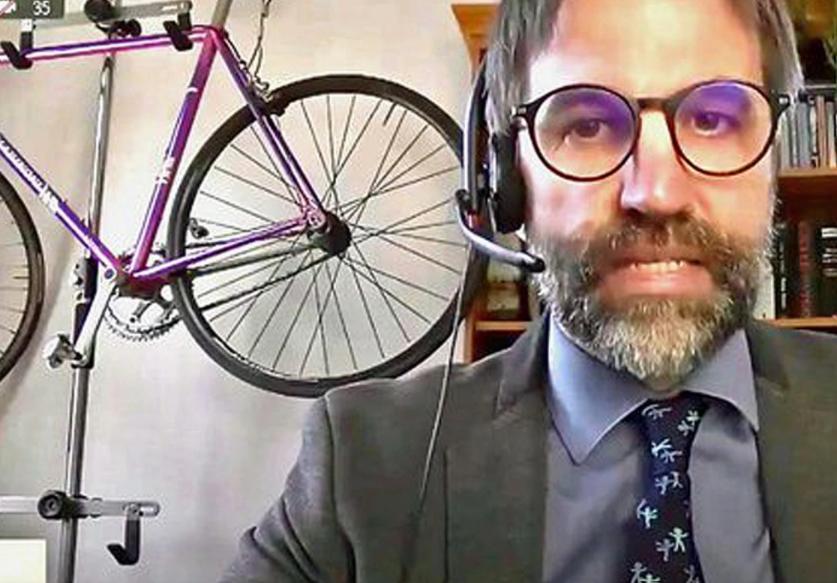 “Only a Conservative could see a bicycle as a partisan symbol,” said one “dumbfounded” MP
by Simon_MacMichael

MPs’ Zoom backgrounds became a talking point during lockdown last year, whether it be the Damien Hirst portrait of the Queen that former Health Secretary Matt Hancock had in his office, SNP Westminster leader Ian Blackford’s Celtic FC memorabilia or Barnsley East MP Stephanie Peacock’s peacock-themed wallpaper – but now, a government minister in Canada has found himself under criticism for allegedly using a bike as a “prop” while virtually attending a debate at the country’s House of Commons.

During Question Period yesterday, Minister of the Environment and Climate Change Steven Guilbeault could be seen on screen with a purple Marinoni singlespeed bike hanging from a stand behind him, reports Canadian Cycling Magazine.

But the Conservative MP Ed Fast was distinctly unimpressed, and said that the minister was “presumably trying to make a statement about his environmental cred.”

Raising a point of order, he said: “We have a rule in the House. I believe it is a rule that has been consistently applied that props are not to be used by those of us speaking in the House.

“Wherever he was virtually, he was in a room where hanging behind him on the wall was a bicycle," he harrumphed.

"What the minister has done is blatantly use a prop because he is now doing it from the safety of some other room: perhaps his office or his basement. I would ask the Speaker to rule on this. I believe it is an abuse of the traditions of the House.”

New Democratic Party MP Daniel Blaikie replied: “I’m dumbfounded. Only a Conservative could see a bicycle as a partisan symbol.”

But Speaker Anthony Rota reminded MPs that “what is a prop is really perception by everyone who is watching,” and asked them all, whether physically in the House of Commons or attending virtually, “is to make the background as neutral as possible.”

Louis Plamondon, Canada’s longest serving MP, who represents the Bloc Quebecois party, said, “Perhaps the minister wanted to show us that he could not be in the House in person because his bicycle had a flat tyre?”

Guilbeault himself said that the bike – made in Montreal – was not questioned when he was heritage minister last year.

Writing on Twitter, he wondered whether he should “also remove my plants and books, other dangerous props.”

He continued: “The bike has been there long before we started doing virtual Parliament.

“In fact, it has also been there for months as I was taking questions as heritage minister. Strange that after almost a year, it’s become an issue.”

Thank you for the kind words about the bike! It was made with care right here in Montréal, and I’m proud to ride it twelve months of the year. https://t.co/ROtDiJG6Mj