The TT specialist has plenty of time for Wilco Kelderman, but says Vincenzo Nibali's head is too high and João Almeida needs to sort out his baggy kit...
by Jack Sexty

As an Olympic time trial champion, Tour de France winner and former Hour Record holder, Sir Bradley Wiggins certainly knows a thing or two about the humble TT. Ahead of today's stage 14 time trial, that was won convincingly by Filippo Ganna, Wiggo gave his thoughts on some aero set-ups of a number of riders... and not all of his feedback was positive.

Should you get a bike fit?

Analysing footage of the opening stage 1 time trial, Wiggins started by praising the position of Sunweb's Wilco Kelderman, appreciating the Dutchman's flat back and low head: "You can see that his race radio is taped up in the back of his helmet, and his suit is tight with hardly any creases", he commented.

There was less love for the positions of Vincenzo Nibali, Jakob Fuglsang and current Maglia Rosa João Almeida. Wiggins said the former's head is is too high, while Almeida and Fuglsang are both losing aero gains because their race radios had slipped down the back of their skinsuits: "All that wind-tunnel testing and the slick aero back and then you go and put the radio down it", Wiggins said of Fuglsang.

He also criticised the positioning of Almeida's computer and the creases in his skinsuit, saying: "What a race he’s had. But you can see his race radio again just on the back, his skinsuit is quite baggy with lots of creases in it.

"He’s got that praying mantis position, but you can see his Garmin there as well. All of these time trial bikes are put in the wind tunnel for a clean aerodynamic set-up and then you go and put a Garmin on it."

Wiggins didn't necessarily praise the position of world time trial champion Filippo Ganna, suggesting that his huge power is more than enough to make up for any lost marginal gains: "The king of the time trials is of course Filippo Ganna", said Wiggins.

"He kind of defies all the odds really, although he does have quite a clean aero set-up. But what he possesses is simply raw power. At the end of the day you can have the best aerodynamic set-up in the world, but if you haven’t got the legs you’re going nowhere."

It turns out that Ganna's "raw power" coupled with a (sort of) Wiggo-approved aero set-up was more than enough to net him another barnstorming stage win, besting Ineos Grenadiers teammate Rohan Dennis by 26 secs to win the 34.1km time trial in 42:40. It's the third stage win of this Giro for Ganna, who also became the new TT world champion last month.

Almeida also came sixth despite his alleged baggy skinsuit and messy Garmin set-up, increasing his lead over all his general classification rivals; including Wiggo's TT set-up golden boy Kelderman, who finished ninth on the day and sits second in the GC standings. The top 10 results from stage 14 are below: 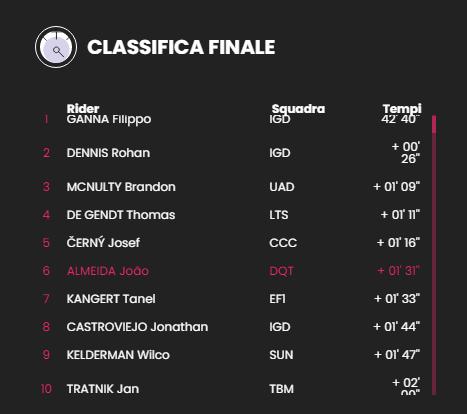