With bikes currently being in such strong demand globally, it has become increasingly difficult to get the bike you want when you want it, with lead times often running into several months – and in response, we’re hearing more reports of fake websites trying to part people from their cash for bicycles that don’t exist, apparently offering deals that seem to good to be true, because they are.

While that alone may set alarm bells ringing among many prospective purchasers who will quickly realise that they risk being scammed, what the operators of such sites are banking on is that human nature being what it is, others will place an order and never see the bike, or their money, again.

Here’s one example we spotted in recent days, purporting to be a site for Merida, although there are a few giveaways, not least the URL which is for an author’s website (typically, scam sites will use a URL that looks more convincing, of course). 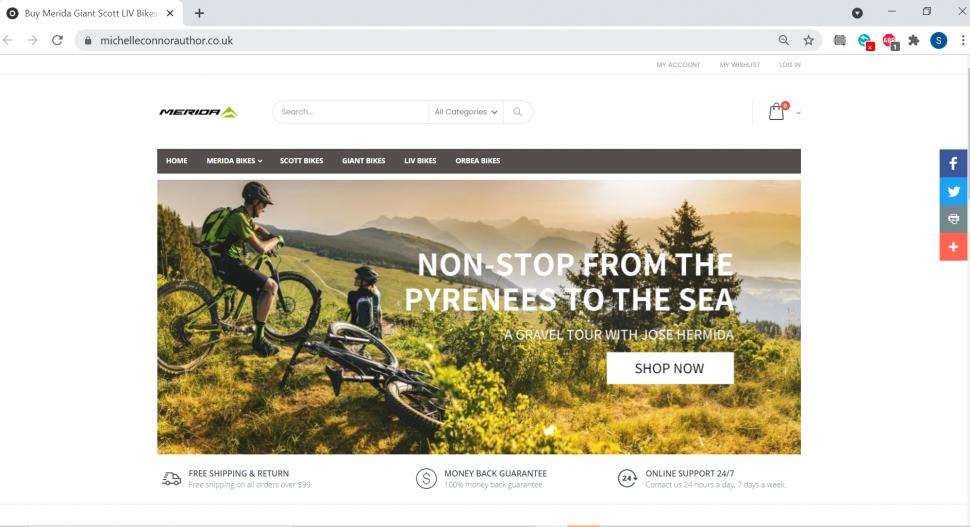 Other clues that all is not as it seems in this specific case is that despite apparently being a Merida site, it also sells other brands, such as Giant and its women's brand Liv, and the use of the words such as “Cheap” or “Best savings” alongside the product names – not the sort of copy you’d typically see on an official website.

Delve further into the site and there are some more warning signs – click on ‘About us’ and you’ll be told that “Founded in 2012,  we are one of Britain's most popular knives online retailer. and offer top notch customer service all over British.”

That reflects the fact that it's not just people looking to buy a bike who are being targeted – any expensive prospective consumer purchase is fair game for the fraudsters.

Further down the same page, it says: “Our Winning Services delivery team reaches 95% of all Britain's from local warehouses in every state, and for most metro areas, we deliver the next day. At Appliances Online, we’re forever saying yes in a world that says no – even if that means rebelling against conventions.”

A few red flags there, then, and a sign that these operations are multinational in their approach, with wording there that is more appropriate to the US than the UK.

We're in contact with one person who has fallen victim to a separate fake website and will be sharing his story on road.cc soon, and another bogus site where a purchaser lost her money was recently flagged up by Singletrack.

The issue of fake websites, which includes bogus businesses selling on platforms such as Facebook, is one that the major bike brands have been aware of for many years now, and besides trying to take steps to shut them down – effectively a game of whack-a-mole, since the fraudsters will just spring up somewhere else under a new URL – they also provide advice to customers on how to avoid being scammed.

Trek’s GB website, for example, has a page dedicated to how to identify a website that appears to be that of the US brand, but which in fact may be trying to scam you, as follows:

The deal is too good to be true

If an advertisement is telling you that the bike you want is now 70%-90% off, they are lying to you. Do not click on the ad. Do not give them your money or any personal information.

Trek and our retailers hold ourselves to a very high standard of customer service. If you cannot reach the person you are buying from, do not buy from them.

The site is relatively new

You can check to see how long a website has existed by entering it into archive.org. If the site is brand new and offering steep discounts, do not purchase anything from them.

The site does not ask you to pick a preferred retailer

All current model Trek bikes ordered online must be delivered to an authorised Trek retailer for assembly. If you are not asked to select a retailer to dispatch a bike to, do not buy from the site. Previous model year Trek bikes can be delivered directly to consumers, but only through an authorised retailer’s website or BikeExchange.com.

The company also provides information on how to check whether a site is genuine, for example using an online tool such as ScamDoc.com to verify it, calling or emailing your local Trek dealer, or contacting Trek customer service direct.

Scott is another company that has taken action against fake websites.

In 2018, BikeBiz reported the Switzerland-based company’s brand director Reto Aeschbacher as saying: “As an innovative brand, Scott has faced legal issues with product piracy and fake suppliers for a long time.

“There is an emerging number of well-organised online fake shops with a criminal intent luring consumers – they look quite authentic at first sight.”

It’s not just fake websites of course that can catch out unwary, with a thriving industry operating mainly out of China selling counterfeit cycling components, clothing and even complete bicycles – as outlined in an extensive series of articles on BikeBiz back in 2016.

As ever, the term caveat emptor – let the buyer beware –applies. And while we don't know whether the scammers behind the particular website we have highlighted here have a sense of humour, one of the books by the author whose site has been hijacked does perhaps sum up their victims ... The Deceived.

We’ve written frequently on road.cc over the past few months about the current bike shortage in Britain resulting from disruption to the supply chain and increased demand from people wanting to ride for both exercise and transport.

Bike suppliers can’t satisfy current demand – they can sell virtually any model they can get their hands on at full retail price without any trouble whatsoever – so the chances of any bike being offered legitimately at a significant discount are slim. In other words, if a website is promising great deals at the moment, double-check that everything is as it seems before parting with your money. Look for a phone number and give them a ring, and/or call the relevant UK distributor to check the credentials.