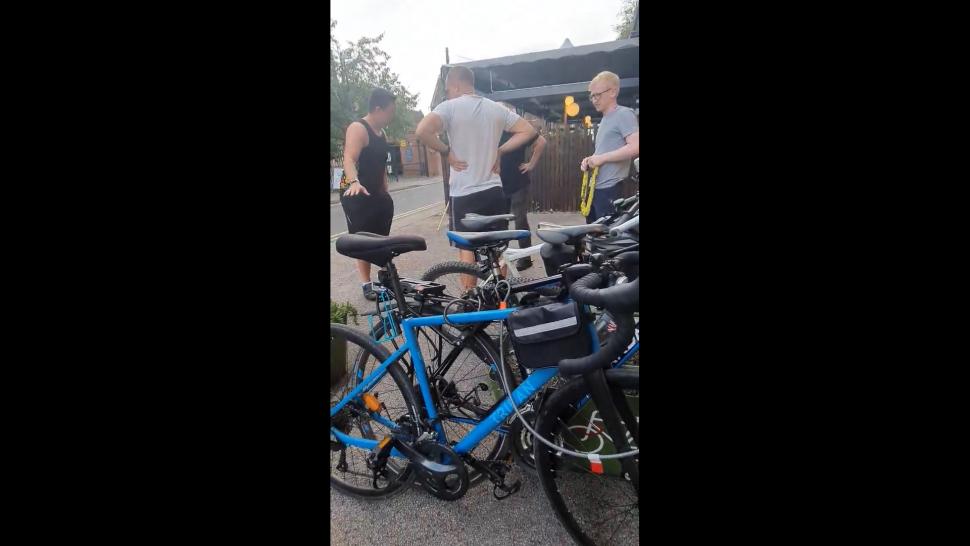 Entertaining scenes unfolded when a man took issue with cyclists locking their bikes to... a PlantLock bike parking unit
by Dan Alexander

"The joy of cycling in Worcester," the sharer of this video from the West Midlands' city captioned the scene — a group of cyclists using a dedicated bike parking facility when a disgruntled shop caretaker stormed over to defend his neighbour's business, only to be left red-faced and apologetic for the misunderstanding...

The group, attracted to the PlantLock's signage showing a bicycle with two red chains around the frame and wheels, stopped to use it to keep their bikes safe while getting a bite to eat.

The problem, according to the man who came swearing at them about damaging property, was that the red locks (apparently) did not mean they were allowed to chain their bikes to the planter, but rather that they could not park bikes there — again, apparently. What followed has been shared hundreds of times on Twitter...

The joy of cycling in Worcester. Can't even lock your bike to a plant lock without a guy coming out with a chain to lock them up, manically swearing at you because you're "damaging their property". Thankfully the kind bloke at Burger Shop let us bring in our bikes. @BikeWorcester pic.twitter.com/aD30TIxTsa

"Do you realise that you might have damaged their property?" the upset man asked the group before clarifying he was there "looking after" the premises next door for its owner.

"We are not being condescending, but anywhere in cities around the world these are for bike parking to lock your bikes to," one of the riders explained. The other side of the story? "From our point of view that symbolism means 'do not park here'," the reply came.

Like a game of table tennis the baffling ball of response came flying back: "No, from our symbolism that is 'do not park'. Red has obviously got to be a warning symbol."

Time for the punchline? As the discussion continues, the third rider notices the PlantLock branding on the end of the bike-parking plant pot... "It's called a PlantLock...because it actually is to lock your bike."

Explaining the concept, the first cyclist then explains: "It says PlantLock because these are designated to make cities look green and [be a] place where you can park your bike. It's what they're designed for. It's the primary design."

Game. Set. Match. The last word from the disgruntled protector of driveways? "Righty-ho, well I do apologise, I will take it up with the owner."

> Extension of cycling ban in Worcester city centre 'an embarrassment'

Bike Worcester, a group promoting cycling and active travel in the city, got involved to explain the units are council-funded and all businesses had to sign an agreement as part of the ParkThatBike initiative, which gives businesses free cycle stands.

Nick Sturdy, the cyclist who posted the footage, told road.cc that the man who approached him and his friends was "allegedly looking after" the vacant property next door to the burger restaurant they were sat at after locking their bikes, and wasn't associated with the restaurant in any way.