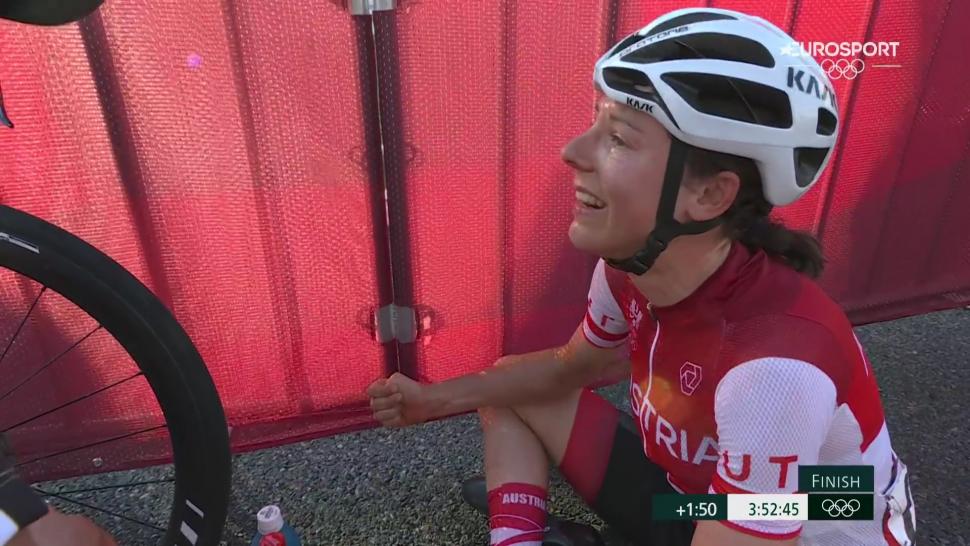 "We've got the biggest upset we've ever seen in cycling at the Olympic Games in the road race"...
by Will Bolton

Austria's Anna Kiesenhofer took an incredible victory beating the favourites to win gold at the Olympic road race in Tokyo.

The 30-year-old, who currently doesn't have an elite trade team contract for next year, rode away from all her competitors as confusion reigned in the bunch behind.

Chris Boardman praised her remarkable ride, and said: "She has just ridden valiantly from start to finish... it is the day of the underdog."

She attacked with four other riders from the gun and  rode away by herself with 41km to go as the breakaway raced over the Kagosaka Pass.

Kiesenhofer, who also has a maths degree from Cambridge University, held off a solo counter-attack from Annemiek van Vleuten (Netherlands) with 51km to go.

A few facts about the rider out front Anna Kiesenhofer:

Simon Brotherton, commentating as the Austrian crossed the line, said: "We've got the biggest upset we've ever seen in cycling at the Olympic Games in the road race.

"The cycling world will be stunned."

Van Vleuten made a late attack and held off the peloton to take silver and Elisa Longo Borghini (Italy) also broke clear of the chasing bunch to take the bronze medal.

At the finish Van Vleuten admitted she didn't realise that Kiesenhofer had already won and said that as she crossed the line she thought she was taking gold.

#CyclingRoad #Tokyo2020 Actually, I remember telling my old director last year he should hire Kiesenhofer 😹 (already text him saying I told you so 😹😹😹) https://t.co/ty3gdHrTKG