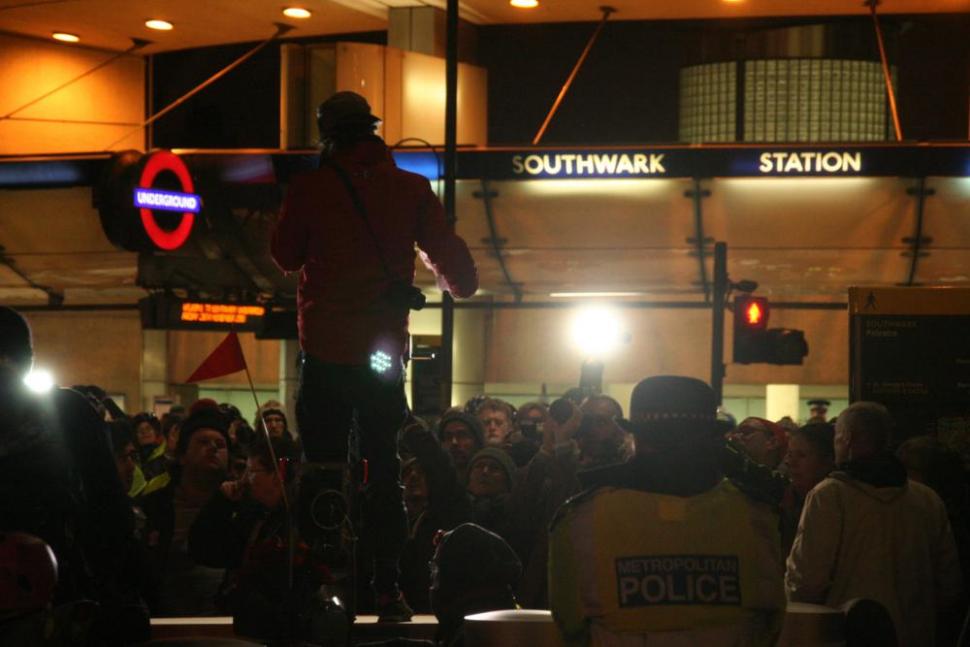 Around 1,000 people braved the late November chill last night to take part in a vigil and die-in protest outside Transport for London headquarters.

The demonstration comes after the cyclist death toll for 2013 reached 14 in London, with the most recent six fatalities occurring in a two-week period earlier this month.

Demonstrators called on Transport for London to act quickly to improve provision for cyclists on London’s roads.

They called for London and its boroughs to spend the same per person on cycling provision as the Netherlands - £33 per person per year instead of the current £1.25 spent in the UK.

Organisers are also demanding a ban on vehicles whose drivers cannot see adjacent road-users; and a full London-wide segregated cycling network to be built urgently.

Nazan Fennell, whose daughter Hope was killed two years ago by an HGV while trying to cross the road, spoke at the demonstration and later told BBC London: “There needs to be regulation on lorry access to busy urban areas.

“It should be made compulsory that they have safety equipment fitted. Equipment that would cost around £500 would have saved my daughter’s life. Nobody should lose a child.”

At the beginning of the die-in, organiser Donnachadh McCarthy said: “We Londoners are going to join the Dutch, and follow them until we get our roads safe.

“So I respectfully ask you now, London cyclists and pedestrians and drivers who have come to join us today, to lie on the pavement with your bicycles, turn on your lights and let them flash in the memories of people killed and injured in the last eight years.”

In an interview with the BBC he said: “We want a real budget, at the moment we’re getting crumbs.”

Mr McCarthy said that there were no representatives of cycling or pedestrian groups on the board of Transport for London.

he said: “We want an integrated cycling network in London within five years and we want a say at the top table.”

Leader of Southwark Council Peter John agreed that cyclists should be represented on the board of TfL.

He said: “If we are going to follow a Dutch-style approach it will mean re-defining and re-planning how traffic moves around our capital, in a way that we haven’t really had before.

“That needs strategic overview, that needs the mayor to bring councils together... and he needs to do it soon.”

TfL’s managing director for surface transport Leon Daniels said segregated cycle routes would be built over the next 10 years.

He said: “We are all shaken by the recent spate of deaths on the roads, and our sympathies are with all the friends and families of those affected. The protesters are rightly demanding safety should be at the top of our priorities. It is.

“That’s why we are investing nearly £1 billion in upgrading the existing superhighways with greater segregation, introducing major new segregated routes and backstreet quiet routes, and overhauling dozens of junctions to give more protection to cyclists.

He added: “Delivering such major improvements will take time, but we are working flat-out to do so. We and the mayor have set out our plans and the first major improvements, such as the segregated extension of the Superhighway to Stratford, are now being seen.

“Over the forthcoming weeks and months Londoners will see many more improvements as the investment we are making bears fruit.”

But Andrew Gilligan, the mayor of London’s cycling commissioner, said the protesters were “deliberately asking for things they know neither we, nor any administration, can give.”

In a posting on Talk London before the demo, he wrote: “One of the demo’s demands is for a “ban on any vehicles whose drivers cannot see adjacent road users” – in other words, a ban on lorries.

“This would, of course, cripple London’s economy, empty the supermarkets and throw hundreds of thousands out of work overnight.

“Maybe the die-in people just haven’t thought about their demands. Worse, maybe they have - and are deliberately asking for things they know neither we, nor any administration, can give, so we can then be accused of selling out.

“The problem, I suppose, for the diers-in is that we have a highly ambitious cycling programme. What can they ask us to do that we’re not doing already? ... We promise to do a huge network of cycle routes by 2016 – so the demand becomes for an even bigger network, to be finished even sooner.”