We've just taken delivery of the new Garmin Virb Elite HD camera. It's a serious bit of kit, this, and the £349.99 price reflects that, but it's more than just a helmet camera for recording your commute in: it looks to be a genuine contender to the still-dominant GoPro Hero in the amateur (and professional) point-of-view stakes. 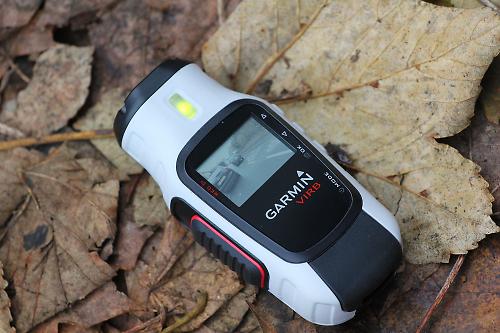 Bigger than a GoPro, with a rugged rubberised body and a wide-angle lens, the VIRB is waterproof out of the box; there's also a dive case that's good to 50m. The obvious main difference is the fact that you get a screen built in. It's an LCD with no backlight, using ambient light to show the image. It's not going to win any awards against the OLED screen on your smartphone but it's mainly useful just for framing, and displaying all the other info the Virb Eilte collects - more on that later. And it's very frugal on the power too, which is A Good Thing as far as cameras are concerned. Garmin reckon you can shoot three hours of footage on one charge of the Virb's 2000mAh battery which, if true, is class-leading. 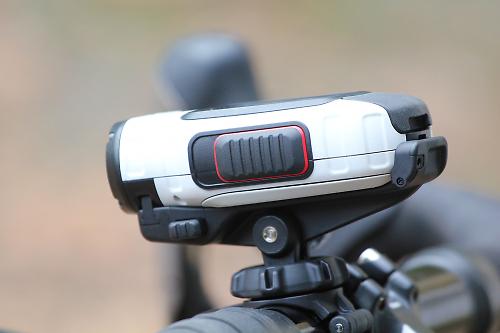 Recording with the Virb couldn't be simpler. There's a huge slider on one side of the body, just push it forward and you're rolling. Even if the camera isn't turned on, flicking the big switch will set it recording, although there's a lag of a few seconds while it fires up. It'll record in full HD1080 at 30 frames a second, with 60fps HD720 and 120fps SD480 modes available, as well as a time lapse mode. It'll take stills up to 14MP too. 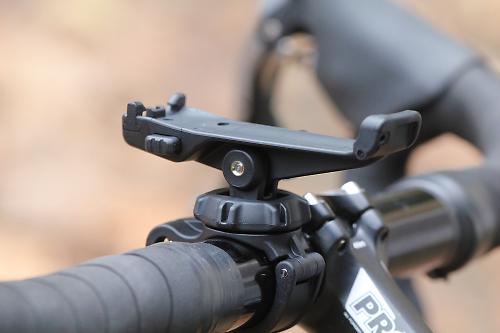 The Virb is connected to its mounts by a cradle that hooks into the back of the camera, with two spring loaded pins at the front holding it in place. There's a range of different mounts: we have a bar mount, shown above, a vented helmet mount (with straps to go through the vents) and sticky mounts for attaching to a flat surface like the outside of a ski helmet, or a car panel. The mounting hardware is significantly chunkier than the standard the likes of GoPro and Nilox use, which is good because the camera's heavier, and all the connections have a notched surface to stop the camera moving position. It all works very well; there's a standard tripod mount available too. 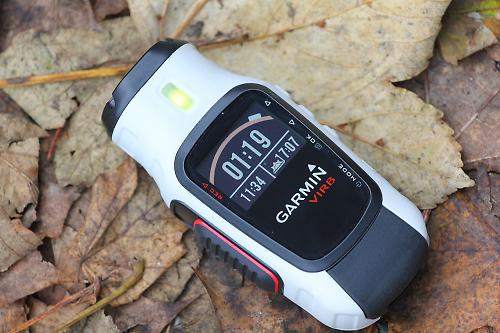 On to some of the stuff you wouldn't expect. Or maybe would, seeing as how it's a Garmin. The Virb Elite has a fully functioning GPS, WiFi and ANT+ setup inside it too. That means you can use it as a bike computer, and you can also overlay speed, accelerometer and other information over the video using the VIRB Edit software. Plug it into your PC and fire up Garmin Connect and you can upload your rides like you would from an Edge computer. You can link heart rate, cadence and temperature sensors to the Virb Elite and all that stuff will get logged too. There's a number of data screens that you can display on the LCD to show your stats mid-ride; they're not configurable like they would be on a dedicated GPS.

And that's not all: You can pair your Virb Eilte with your Garmin (newer models only) and use that as a remote control for the camera (there's a dedicated remote too). You can also control the camera from your smartphone using a free app, although that's yet to be released. And if you have deep pockets and more than one Virb you can daisy-chain them together so that pressing record on one sets them all going: great for multiple angles of the same thing. That'll please the pros, as will the ability to fit an external microphone.

The camera is designed for all outdoor activities. It can be set to record when it's moving (good if you forget to press the record button before that lake jump) or to record only when you're going downhill: ideal for skiiing where you don't really want a bunch of footage of yourself sitting on the ski lift.

We haven't had the Virb very long but we've had it long enough to try it out on the streets of Bath in the day, and at night: below is some sample footage, shot in 720P. First impressions are pretty good and we'll give it thorough going over in the next few weeks.