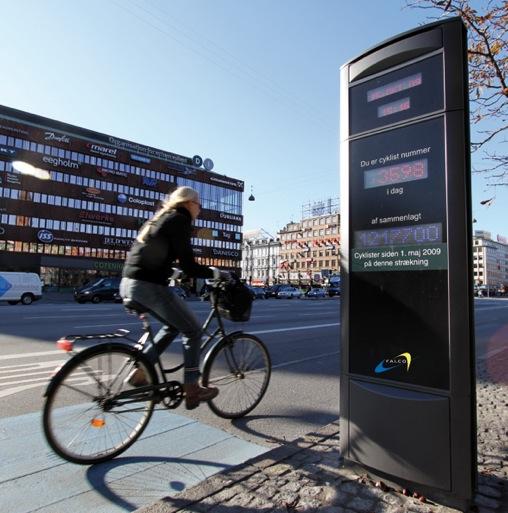 Scotland to get its first cycle counters at nine locations

Cycle counters similar to ones used in Denmark are to be put up at nine locations in Scotland, the first time they will have been deployed in the country, says Sustrans.

The sustainable transport charity is putting up the cycle counters with the help of a grant from the Scottish Government.

Digital displays will show the number of bike riders passing the location on the day in question, as well as the total for the year to date. The information will also be made available online.

The cycle counters will be located at two sites in Edinburgh, Middle Meadow Walk and the Union Canal at Edinburgh Quay.

There will also be one in Clydebank, Coatbridge, Glasgow, Inverness, Perth and Stirling, plus the village of Benderloch in Argyll & Bute.

The locations were selected after local authorities were invited to bid to host the cycle counters, says Sustrans.

Data from all nine will also appear on a “master digital totem-pole” outside the Scottish Government’s Victoria Quay office in Leith, Edinburgh.

Sensor loops placed in the ground and connected to the counters only capture passing wheels on bicycles and do not count motor vehicles or pedestrians.

Supply and installation will be carried out by Denmark-based cycle counter specialists, Falco, whose UK website describes it as “an intelligent traffic management product designed to help local authorities proactively manage their cycle planning.

“By providing up to the minute data on cycle and vehicle use, management teams can plan and organise effective cycle routes, cycle path development, signage and information systems and cycle promotion campaigns.”

Sustrans says that all of the cycle counters as well as the Victoria Quay totem pole will be installed in time for Christmas.

Its community links project officer, Paul Downie, said: “Cycle counters have been used to great effect in a number of European countries and research shows that they can serve as promotional tools to encourage people to cycle on a daily basis.

“In the future, we will have accurate data on the number of cyclists using the nine different routes that have been selected, which will make transport planning easier.

“We hope that the first nine cycle counters will prove to be highly successful and that the Scottish Government will consider rolling out these installations to other locations throughout the country.”

“Opting to cycle rather than taking the car not only helps reduce carbon emissions and tackle climate change but also improves our health and well-being.”

He added that the government hoped the counters would demonstrate that increasing numbers of people were switching from cars to bikes for their journeys.

Ian Maxwell of Lothian cycle campaign group Spokes welcomed the news, but said that the network of cycle paths in the north-east of Edinburgh would also be ideal locations for such counters.

He told the Edinburgh Evening News: “We’ve heard stories of people from Copenhagen cycling past one more time to get it up to a number – not that we want people to cycle up and down just to boost the numbers.

“However, any public display that promotes the idea that cycling is growing is  welcome.”

The first cycle counters in the UK were installed in Brighton & Hove in 2010. The following year, we reported that one of the £25,000 machines had been rendered inoperative after being attacked by vandals - although the local council confirmed that it was quickly repaired.