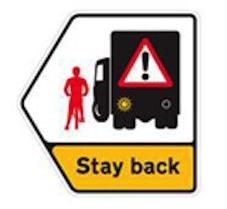 In a week that has seen the death toll for cyclists hit by lorries rise to seven this year, two organisations have issued new calls for safer HGV measures.

Aviva, the insurance company, has announced that it will fund the cost to equip LGVs belonging to companies that insure with them with a decal to affix to the rear left-hand side of lorries warning cyclists about the danger of pulling along the inside of a truck, especially if it is turning left at a junction.

The company will also promote Enlightener Fresnel Lenses – a thin optical lens which is affixed to the inside of the passenger window to improve the driver’s view of the major blind-spot areas, directly below and behind cabs on LGVs.

“However, with the growing number of cyclists has come a similar rise in collisions.

“This is a critical road safety issue, and everyone has a role to play. As a leading insurer, we believe more can be done to improve cyclist safety, specifically involving their interaction with LGVs.

“By helping our fleet customers take a couple of small steps to make cyclists visible to drivers and alert cyclists about the dangers of riding along the inside of a lorry, we hope we can play our part in reversing the shocking increase in the number of cyclists killed or suffering life-changing injuries.”

In London over the last 4 years, LGVs have been involved in more than half of the cyclist fatalities, while accounting for less than 5% of traffic.

London’s Transport Commissioner, Sir Peter Hendy, CBE, said, “I welcome Aviva Insurance taking these positive steps, which will help to make cycling even safer on London and the UK’s roads.

“The number of people cycling in London continues to grow and we’re working closely with the freight and construction industries to further improve the safety standards of lorries on the capital’s streets.

“Through providing these vehicles with the tools to help both drivers and cyclists be more aware of each other, we can further reduce the risks of collision in London, across the UK and Europe as a whole.”

Gordon Telling, Director of Policy at Sustainable Freight Solutions, said of the initiative, "Too often, cyclists inadvertently find themselves in danger because of their lack of understanding about how large vehicles move when they are turning.

“This combination of measures will both help cyclists to understand the danger zones around large vehicles and help drivers to see those cyclists and avoid them."

Also this week, the company Smart Witness, which manufactures vehicle CCTV, has called for side, front and rear CCTV cameras to be made compulsory for all lorries - a perhaps unsurprising commercial move.

Simon Marsh, a spokesman for Smart Witness told Motor Trades Insight: “The number of tragic deaths can be reduced significantly if lorries, coaches and construction trucks are fitted with safety cameras that clearly show HGV drivers if cyclists or other road users are nearby.

“Long vehicles often have several blind spots and wing mirrors are simply not effective enough for the driver to see what is on his inside or outside, which is especially important if the driver is about to make a turn.

“We have found that the haulage firms who have installed the Smart Witness video cameras have seen a significant reduction in accidents. Our system of cameras fitted around the lorry or coach give the driver a much better view of both the left and right-hand sides of his vehicle and can show if vehicles are directly behind as well.”

Just this week we reported the death of Brian Holt, killed when he was hit by a tipper lorry on London’s Cycle Superhighway 2 in Mile End.

Mr Holt, a married father, was described by colleagues at Mile End Hospital, where he worked as a porter, as a “wonderful man who would be sadly missed”.

The collision happened at the junction of Mile End Road and Bancroft Road at aboyut 4:50 on Tuesday afternoon. Witnesses said the lorry struck Mr Holt after pulling away from traffic lights at the junction.

The Metropolitan police believe that the lorry was not turning at the time of the collision.