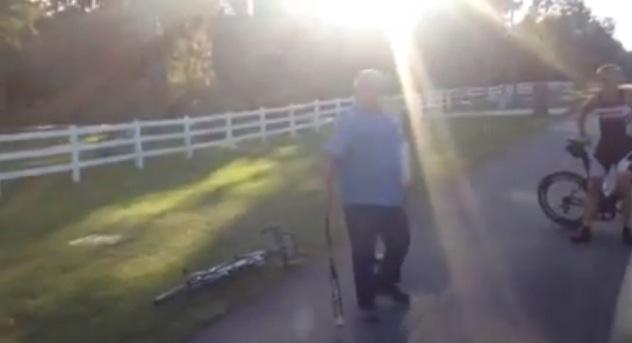 Sherman Clark said to have braked in rider's path, leaving him with fractured wrist...
by Simon_MacMichael

A 74-year-old man in Texas has been caught on camera wielding a baseball bat as he confronted a group of cyclists, one of whom was left with a fractured wrist when the driver allegedly veered into him and braked hard moments before. The film, posted to YouTube, also shows the motorist running over a bike as he drives off.

The driver of the pick-up truck, Sherman Clark, was arrested on charges of aggravated assault with a deadly weapon and criminal mischief as a result of the incident, which took place near Conroe, 20 miles north of Houston, on Thursday evening.

According to a report on the website of local TV station KHOU, ten members of the Woodlands Cycling Club were on a group ride on Lake Forest Drive when Clark pulled up alongside the riders, who were in single file, and yelled at them to get off the road.

After moving ahead of them, it is alleged he then slammed on his brakes, causing one of the cyclists, Rick Sauvageau, to crash into the rear of Clark’s vehicle. The rider suffered a fractured wrist and also hurt his knee and shoulder.

“Once he saw me in his mirror, he veered right and slammed on the brakes. I had no time to react,” claimed the cyclist.  “It was beyond me that the guy would do that in the first place.”

After Clark got out of his vehicle, baseball bat in hand, one of Mr Sauvageau’s club mates used his mobile phone to record what was happening.

One rider asked the motorist: “Sir, why you holding a bat?”

Clark responded: “To protect myself.”

The same cyclist inquired: “What did we do wrong?”

The driver, waving the baseball bat towards his inquisitor, replied: “You were riding all over the damn road for one thing.”

“You drove right past us, no problem,” noted the cyclist. “You got in front of us, didn't you? And then somebody tried, yeah, and you ran them off the road?”

“Yes, you're damn right,” concluded Clark before getting back in his pick-up truck and driving off, running over a bike in the process, one of the cyclists aiming a kick at the vehicle in response.

Mail Online spoke to Clark who says that the assault charge was dropped when he was arraigned on Friday, although the website adds that it has not been able to obtain confirmation of that from police.

The driver admitted that he had previously had angry exchanges with the same riders, whom he sees as disturbing the peace and quiet of his neighbourhood and not obeying the rules of the road.

Putting forward his version of Thursday's events, he said: "I pulled up to the side of them and rolled down my window and hollered ‘why don’t y’all get out of our neighbourhood?’"

He claims that Mr Sauvageau ran into the back of the truck because he was riding too fast.

Regarding the video footage, he maintained: "This guy that was shooting the video was questioning me like an attorney.

"They had my truck, totally circled, I got out with a baseball bat to have something to protect myself because there’s 10 of them, one of me.

"I got back in my truck, said ‘I’m leaving, you can’t make stay here. You better get out from in front of my truck or I guess I’ll have to run over you."

He added that the riders got out of his way but one left his bike, which eas crushed under the pick-up truck's wheels as it was driven off.

However, club member Steve Schoger insisted to KHOU that none of the riders had done anything to provoke the driver, saying: “He needs counselling for sure. He needs Jesus.”