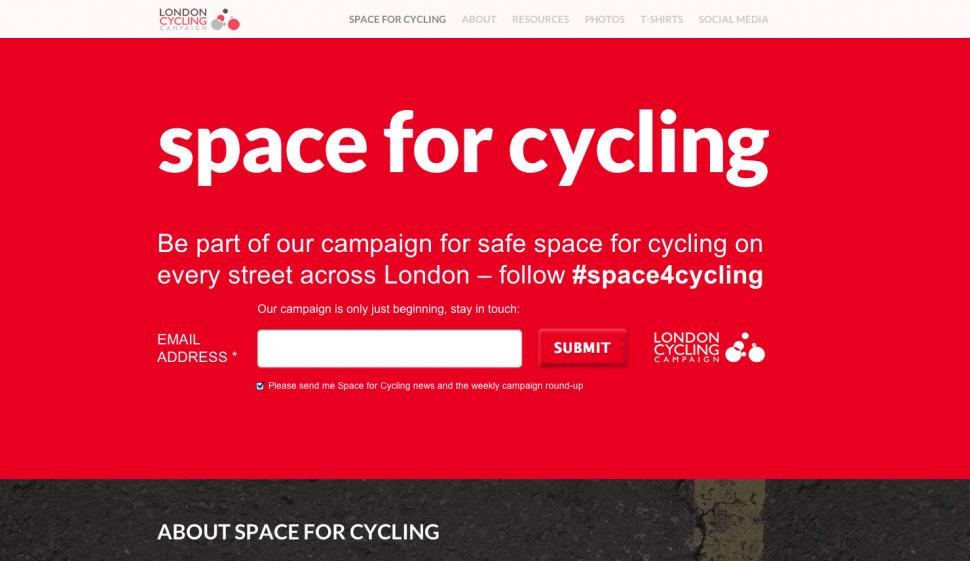 London Cycling Campaign's initiative looks to gain further traction in their quest to improve road conditions for cyclists in London...
by Elliot Johnston

Space for Cycling have launched space4cycling.org a standalone website for the safe cycling initiative run by the London Cycling Campaign (LCC). The launch comes ahead of the LCC’s annual conference on October 19 as they look to increase the influence of their campaign for safe cycling.

It’s been a busy three months for Space for Cycling which was started in response to a number of cyclist deaths in London this summer, specifically that of 20-year-old student Philippine de Gerin-Ricard near Aldgate on Friday 5 July 2013. The first Space for Cycling ride took place there a week later.

Since that first Space for Cycling ride the organisers have utilised social media so effectively that the movement, which began very locally, has now gained national resonance. The initiative has been picked up in Birmingham and Manchester by the cycling campaigns in those areas.

In early September a group gathered to increase the visibility of cycling in Birmingham as well as furthering the LCC’s campaign. Later in the month, a group of Mancunian cyclists rode on the Conservative Party Conference to lobby for more 'space for cyclists'.

The next step for Space for Cycling is to start influencing the lawmakers. The LCC have targeted local elections in London as their best opportunity to impress their ideas on those that will be running the city in the near future.

Creating a standalone website now is a clear signal of the campaign’s intent, and their plans on  having a tangible impact on the government by influencing the candidates for the next year’s local elections.

In a blog post on The LCC website their new activism coordinator Amy Summers said: "In 2014 we're aiming to do something no other campaign group has ever done, and influence every candidate in every ward in Greater London.”

"To succeed in our ambitious plan, we'll need to persuade tens of thousands of Londoners across the city to support our campaign.

"This requires strong messaging and sophisticated electronic tools, but also an army of activists to spread the word and build support in their neighbourhoods."

The LCC’s annual conference is being held this Saturday at the London Metropolitan University on Holloway Road.