Duo Lin helmet made from sustainable materials
by Mat Brett

A University of Brighton graduate has developed a new cycle helmet made from sustainable materials instead of chemical-based plastics. It has a long way to go before reaching production, however.

James Dart, who graduated this year with a BA (Hons) in 3D Design, has created the Duo Lin helmet made with a bio-resin flax foam interior and an exterior shell of resin and woven flax. James said initial trials showed Duo Lin to be tough and resilient, but it will need much more testing to ensure it meets safety standards. It is very much work in progress rather than a finished article.

“I am planning to further develop the materials for a helmet that will meet official British standards and I eventually want to take the helmet into production – I’m currently in talks with a potential commercial partner,” said James, who is now studying for his Masters in Switzerland.

James first developed Duo Lin for a University of Brighton project which has been supported by the Building Research and Innovation Deals for the Green Economy (BRIDGE), a European Union INTERREG IV-funded research project. James’s helmet will feature at the BRIDGE Eco Circus event to be held December at the university’s Grand Parade campus in Brighton.

Materials for Duo Lin were bought by BRIDGE. James used resin made from linseed oil from the common flax plant and a hardener for the outer shell and moulded it with woven flax, set under ultraviolet light. He created a foam from the bio-resin for cushioning the helmet’s interior.

“The finished concept is manufactured using 98% carbon renewable content," says James. "Even the helmet straps are made from needle-punched flax." 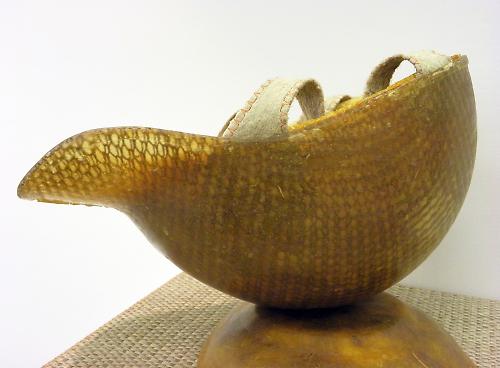 James has been wearing the helmet for his own use and while it is heavier than traditional helmets, he said. “I find it comfortable and it’s great for the British climate… it’s waterproof.

“The helmet is similar in form to some kayak helmets. I am now in Switzerland to continue with development. I have approached a well-known European helmet manufacturer. They are perhaps more interested in the bio-resin material for their own needs but I hope that my design, manufacturing process and testing will mean it will eventually see production.”

1
RideLondon: tacks strewn on route and angry petition gains traction ahead of sportive's Essex debut
2
Moriah Wilson murder: Colin Strickland ‘in hiding’ until suspect Kaitlin Armstrong found
3
“If the weapon had been a knife or baseball bat the driver might be looking at a prison sentence”: anger over hit-and-run driver's assault on cyclist
4
Shimano forces SRAM-owned Hammerhead to remove Di2 connected features
5
Vandals target LTN bollards and planters less than 24 hours after trial is introduced
6
“Drivers have a responsibility to protect vulnerable road users”: Hi-vis police officer close passed by lorry driver
7
Near Miss of the Day 773: Close pass driver sent warning – then “brags they got away with it”
8
“I wholeheartedly disagree with his approach” – YouTube driving instructor Ashley Neal on CyclingMikey