Cannondale has taken its Synapse back to the drawing board and completely redesigned it for 2014, making it one of the hottest new endurance bikes of the year. We’ve got our hands on the £2,499 Carbon 3 Ultegra model to find out how this revamped endurance road bike performs, but before we hit the road here's a first look.

The Carbon 3 Ultegra sits in the middle of a six-bike range. While there are three Synapse's at the top of the range with a Hi-Mod carbon frame, this bike here uses a regular carbon fibre and this same frame is used on three bikes, starting with an entry-level £1,699 model. Despite the differences in carbon, the frames all share the same key design features and tube profiles that are pivotal in the its ability to offer more comfort than the race-focused SuperSix Evo, Cannondale's top-end race bike (now available at a new lower £1,699 price). This bike we have is built with a Shimano Ultegra 6800 11-speed groupset with FSA’s SLK Light Carbon BB30 chainset with compact 50/34 rings, paired with a generous 11-32 cassette out back. It rolls on Mavic Aksium S wheels with matching Mavic WTS 25mm tyres, Cannondale branded handlebars, stem, carbon seatpost and a Fizik Aliante Delta saddle complete the package. The weight? That’s 7.8kg (17.19lb). I was fortunate enough to ride the new Synapse at its worldwide launched back in April on the roads around Tuscany, even including many of the famous white gravel roads that are used extensively in the L’Eroica retro cycling event. Riding a new bike at a swanky launch on unfamiliar roads in such a beautiful landscape isn’t ideal for really getting under the skin of the bike, that’s why we’ve been so eagerly awaiting the arrival of this test bike. It’s on roads and in conditions we are used to that we’ll really get a feel for how this bike performs. 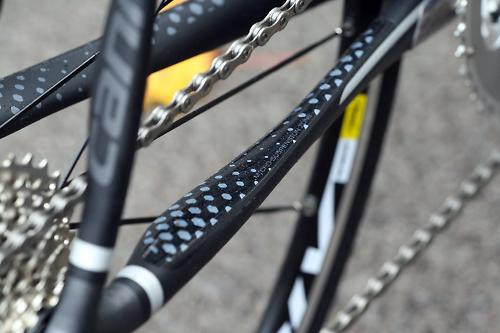 The ‘endurance’ sector has certainly warmed up this year, with Bianchi’s Infinito CV also released this year to much acclaim. We’re testing that bike too so we can offer comparisons between the two. Both have been tested before public release by their respective professional race teams in the early season Classics, Peter Sagan pedalling his custom geometry Synapse to wins in the Gent–Wevelgem and Brabantse Pijl, and second behind Fabian Cancellara in the Tour of Flanders. 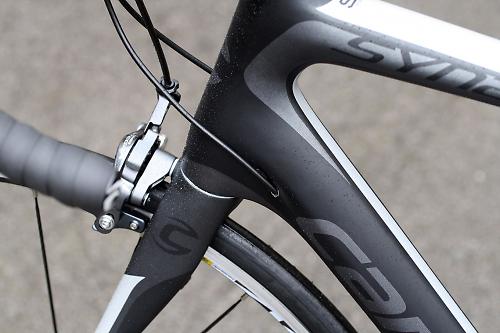 The new Synapse packs a lot of features designed to increase comfort while maintaining the necessary stiffness a performance bike needs, whether it’s pro racing or besting your favourite sportive times. Cannondale’s industrial designer Erik Eagleman described the difference succinctly: “racers want lightness and sharp handling, while endurance riders put comfort and handling above all else.” He then described the difference as the SuperSix Evo being a Formula One car while the new Synapse is a Maserati GranTurismo,” a car built to travel long distances at speed and in comfort. Cannondale further developed their SAVE+ (Synapse Active Vibration Elimination) technology, comprising on the Synapse three complementary micro suspension systems. Smaller road chatter is handled by the carbon layup, bigger hits by the design and shape of the fork and stays, and the really big stuff by the seatpost and seat tube. The critical aspect from a design point of view is that there isn't just one, but three, features of deflection that combine together to give the new bike the desired compliance. The twisted helix seat stays increase the effective length of the fibres – the fibres are actually longer than the actual seat stays – so this means vibrations take longer to travel up the stays. This damps out more of the high frequency vibrations. 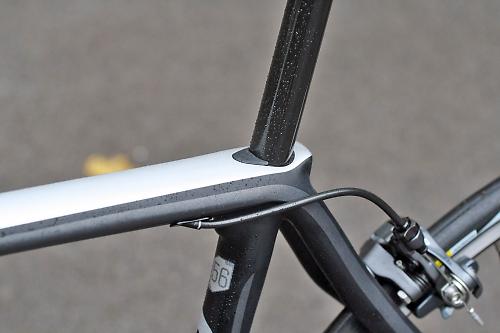 The seatpost is a skinny 25.4mm - we’ve seen a gradual shift to 27.2mm seatposts from a lot of manufacturers, Cannondale has taken it a step further in the search for increased deflection. They've integrated the clamp into the frame, not for aero benefits but to increase the amount of extended seatpost to gain more potential deflection. Cannondale's thinking is that a traditional seat collar would reduce the amount of post that can deflect under impact. The clamp is a three-piece wedge system housed inside the frame, with a small bulge in front of the seat tube. A 4mm Allen bolt in the top tube is covered with a rubber bung and does the business when it comes to adjusting the post up and down. 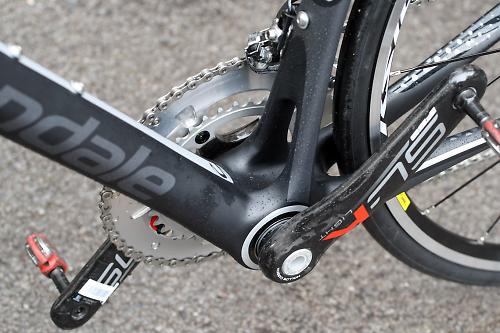 Without doubt the most interesting part of the Synapse frame is the hole in the seat tube. It's the part that everyone points a finger at and exclaims "WOW!" The reason it’s there is that as a result of widening the bottom bracket shell out to 73mm and needing to increase the diameter of bottom of the seat tube to increase stiffness, they realised that by removing material from the centre to the outer edge with two smaller tubes, they could achieve the desired stiffness and also reduce the weight. The Synapse’s geometry is different to the Evo, the main change a 3cm taller head tube and shorter top tube. This 56cm bike has a 72.5 degree head angle and 73.5 degree seat tube angle, that’s a tiny bit slacker in the front than a race bike. The wheelbase is a touch longer too, for increased stability, at 100cm on the nose. The endurance road bike market is becoming crowded with entrants from most of the major manufacturers. A short list reveals such models as the Trek Domane, BMC GF, Specialized Roubaix and the new Bianchi Infinito CV we’ve already mentioned. We’re really keen to see how the updated Synapse stacks up against such competition, especially the Bianchi, on our local roads, so watch this space for a review soon.