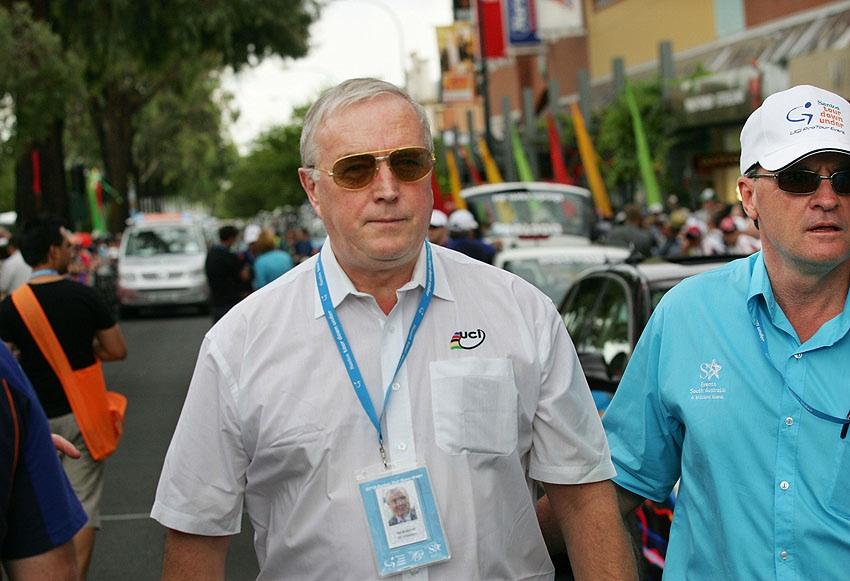 Russian cycling federation Igar Makarov says he won’t hand over the notorious UCI corruption report unless “an external and independent panel of experts is appointed to proceed with such investigations”.

In a letter to ethics commission Pieter Zevenbergen leaked to the Telegraph, Makarov argued that the the commission was not sufficiently independent of the UCI and its sitting president Pat McQuaid.

Makarov said that the fact the secretary to the ethics commission was also the UCI’s legal services manager was “a basic demonstration of the absence of independency of your commission vis-à-vis the UCI management and of your clear incapacity to maintain any confidentiality of the investigation.”

He also said McQuaid’s knowledge of the ethics commission’s activities in relation to a probe about him was “another obvious demonstration – if necessary – that the requested confidentiality and the essential protection of witnesses could not be provided by your commission, not to mention the total absence of independency.”

A summary of the report - compiled by private investigators commissioned by Makarov and UCI management committee member Mike Plant - was leaked earlier this week. McQuaid has already handed that summary to the ethics commission for investigation.

Makarov said the report had been sent to the US Anti-Doping Agency and added: “I reiterate my strong wish to fully collaborate with the UCI ethics commission at the non-negotiable condition that an external panel of experts be appointed to carry out the investigation in total independency and impartiality.”

The report alleges that McQuaid and his predecessor Hein Verbruggen attempted to solicit a bribe from a team manager; that the UCI became involved in a corrupt relationship with another team overnon-payment of salaries; the UCI tried to cover up ALberto Contador’s 2010 doping positive; and that McQuaid benefitted from the UCI’s bending of the anti-doping rules to allow Lance Armstrong to make a comeback at the 2009 Tour Down Under.

McQuaid denies all the charges and has said he will resign from the UCI if any wrongdoing by him is proven.

McQuaid hits out at Brian Cookson

Meanwhile, Pat McQuaid’s latest salvo in the war of words between him and UCI presidency rival Brian Cookson accuses Cookson of planning to run the UCI from the UK, rather than moving to the organisation’s HQ in Aigle.

McQuaid said: “It is already very clear that Brian is seeking a coronation instead of an election. Now he wants to become a ceremonial President.”

In the statement, McQuaid makes much of the fact that Coockson recently retired from his day job. In March 2013, Cookson retired from his mainstream career, where he was employed by Pendle Borough Council as Executive Director (Regeneration).

According to McQuaid, Cookson’s commitment to decouple the governance of the UCI from its day-to-day management is “a ploy to run the UCI from his UK home.”

“The UCI Constitution is very clear on the role of the UCI President. The executive powers vested upon the President can not be simply relinquished or abdicated to un-elected administrators,” said McQuaid.

“I appreciate that Brian has retired but the UCI can not reform its governance and management to accommodate his retirement plans or to facilitate being remunerated while keeping his feet up at home in Lancashire.”

UCI President Pat McQuaid has called on Brian Cookson to stop pretending that his commitment to separate governance from the management of the UCI is anything other than a ploy to run the UCI from his UK home.

McQuaid claimed that Cookson was willing to become a ceremonial President who was detached from the reality of running the sport.

Although he recognised that many national federations have succeeded in separating governance from management McQuaid said that it would be impractical if not impossible for the UCI to do so.

“The UCI Constitution is very clear on the role of the UCI President. The executive powers vested upon the President can not be simply relinquished or abdicated to un-elected administrators,” said McQuaid.

“The UCI President is fully responsible for representing the sport, managing relations with external agencies such as the IOC and WADA and collaborating with the 178 national federations,” he added.

“The UCI Management Committee is elected to set the mission, vision and strategy for the UCI. The UCI President is also responsible for ensuring that the Director General and executive staff implement that strategy and that they administrate the UCI,” he explained.

McQuaid stated that the day-to-day function of the UCI President dictates as a matter of fact that the position is a fulltime job based in Switzerland.

“It is already very clear that Brian is seeking a coronation instead of an election. Now he wants to become a ceremonial President,” said McQuaid.

“I appreciate that Brian has retired but the UCI can not reform its governance and management to accommodate his retirement plans or to facilitate being remunerated while keeping his feet up at home in Lancashire,” he added.

The Irishman stated that cycling required an experienced President who pursued his own vision, who stood his corner and who had faced and knew how to overcome adversity.

“The position of UCI President is a responsible position. Those who occupy it have a duty to uphold and defend the principles of the UCI and to stand up for cycling rather than capitulating to those who seek to undermine or profit from the sport,” said McQuaid.

McQuaid rejected the notion that Cookson had transformed British Cycling while holding down a fulltime job as a landscape architect, urban designer and regeneration specialist in the Borough of Pendle, Lancashire.

“It can hardly be a mistake that the Queen chose to knight Sir Dave Brailsford as the architect of British Cycling’s success. It is certainly reassuring that I am not alone in distinguishing one architect from the other,” he said.

“Brian Cookson has been President of British Cycling for 16 years. Let no one be fooled that he has the credentials to transform the UCI – even if he gave up retirement, moved to Switzerland and had a full 16 years to do it,” he added.