Next year's Milan-San Remo, the longest one-day race on the UCI WorldTour calendar, will feature a new climb late on, the Pompeiana, which organisers RCS Sport promise will make the race "more spectacular and unpredictable."

It comes between the ascents of the Cipressa and Poggio, while the revised route dispenses with the climb of Le Manie, itself only introduced in 2008.

The addition of the Pompeiana, 5km long and with an average gradient of 5 per cent but hitting 14 per cent in its toughest section, will change the nature of the finale of the race, first held in 1907.

Coming 3.5km after the foot of the descent from the Cipressa, and just 5km from the start of the final climb of the Poggio, it should not only force a further selection ahead of that last ascent, but is also likely to be used as a springboard for late attacks.

It also takes away the recovery time that out-and-out sprinters have enjoyed for the past three decades between the Cipressa and the Poggio. Like both those climbs, the new ascent will take the race off the Via Aurelia and into the hills that loom above the Ligurian coast.

The adjustments to the route mean that the 2014 edition of the race, to be held on Sunday 23 March, will now be 299km long.

The Poggio itself was added in 1960 as organisers sought to inject excitement and uncertainty into a race which despite its distance all to often ended in a predictable bunch sprint. The Cipressa, in 1982, and more recently Le Manie, were added for similar reasons.

Since Le Manie, crested with 94 of the 298km parcours still to ride, made its debut in 2008 it has on occasion proved influential in terms of forcing a selection and determining who will be around to dispute the finale, which will remain unchanged on the Lungomare Italo Calvino in San Remo.

This year, however, it was missed out altogether as the race, won by MTN-Qhubeka's Gerald Ciolek, was disrupted by snow, with the Passo Turchino also missed out.

Two years ago, crashes on Le Manie in 2011 forced a split in the field with a small front group including eventual winner Matt Goss of HTC-Highroad getting away and staying clear.

In 2012, Liquigas-Cannondale, working for Vincenzo Nibali, forced the pace on the same ascent, causing race favourite and reigning world champion Mark Cavendish, then with Team Sky, to be dropped.

The race was won by Orica-GreenEdge’s Simon Gerrans, who together with Fabian Cancellara followed a move by Nibali on the Poggio, the trio – with Cancellara doing almost all the work – crossing the line seconds ahead of the main bunch. 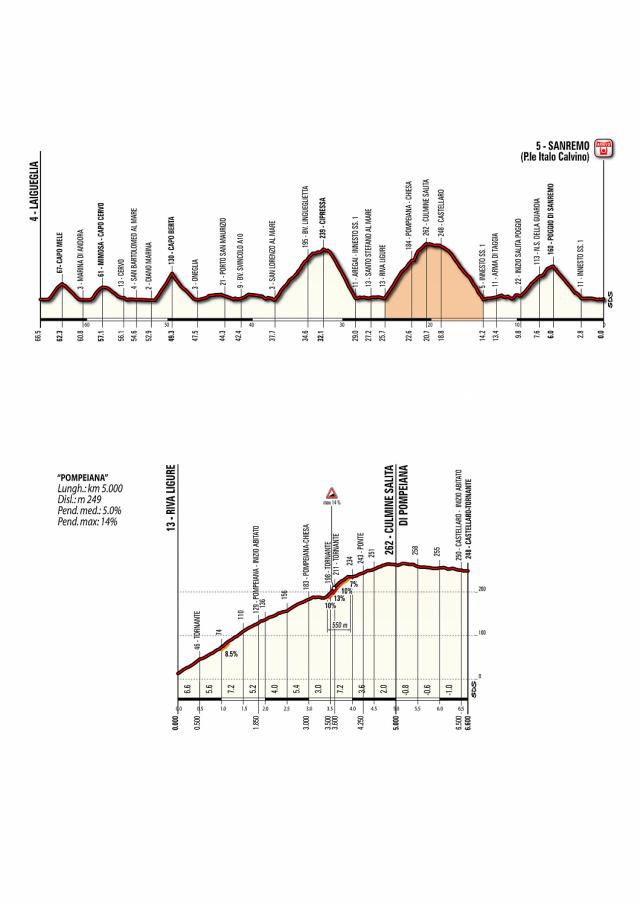