Pinarello's Dogma 65.1 is now available with disc brakes and we've taken it for a spin
by David Arthur @davearthur

The big news in the road bike market this year is disc brakes, and Italian company Pinarello showed their cards at Eurobike with the launch of the new Dogma 65.1 Hydro, a disc-equipped version of the bike that has clinched the last two editions of the Tour de France. This isn’t a replacement for the regular Dogma, far from it, but instead a new addition to the Dogma range. 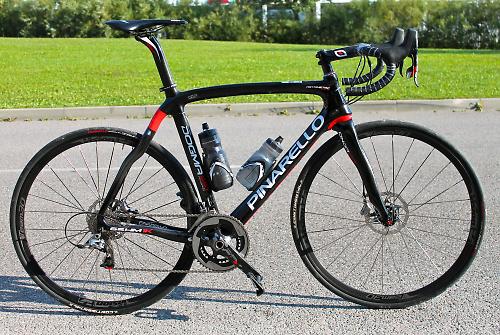 Changes over the regular Dogma are clear. Key features both have in common are the Torayca 65-ton 65HM1K Nano-alloy carbon fibre it’s made from, and the asymmetric design - although that is noticeably less apparent than before. The Dogma was originally made with a much chunkier chainstay on the driveside to handle the higher forces on that side of the bike, but the disc brake means the non-driveside now has higher forces to handle.

The Onda HD fork is an all-new design, with far less wavy legs than we've become used to. The geometry is identical to that of the regular model. 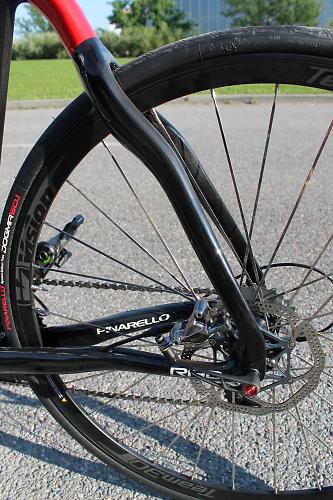 As we've already alluded to, the Dogma 65.1 Hydro has new chainstays, with the same RAD (Rear Arm Disc) rear disc mount as found on their DogmaXC 9.9 mountain bike frame. The post mounts are moulded to the chainstays, leaving the seatstays to provide better vibration damping, according to Pinarello. Think 2 ensures compatibility with all groupsets and braking systems. 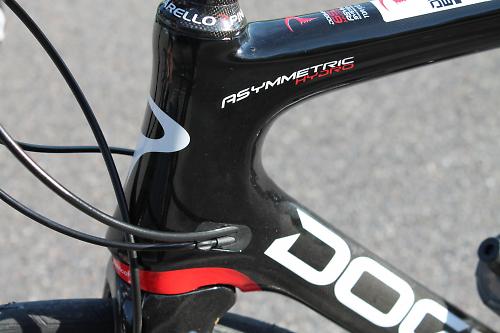 The hydraulic hoses are internally routed, the rear hose entering the chainstay a couple of inches away from the caliper, while up front the hose passes through the entire length of the fork leg. There are tidy little barrel adjusters on the gear cables, just where they enter the frame. 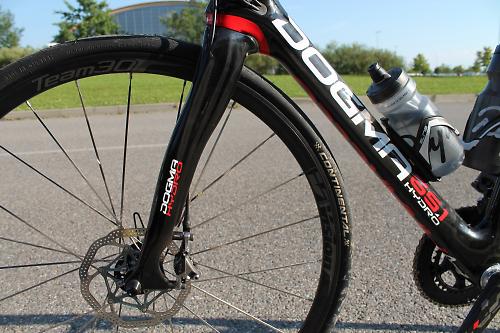 The Dogma 65.1 Hydro will be offered in three builds; Shimano Dura-Ace hydraulic disc SRAM Red 22 Hydro (as pictured) and a Dura-Ace Di2 with TRP Hy/RD hydro brakes. The latter is the model I rode, shod with Vision Team 30 wheels, Continental Special Edition tyres and a MOST (Pinarello’s inhouse brand), one-piece carbon fibre handlebar and stem, with a matching seatpost and pointy Selle Italia saddle. If one thing is going to force you to ride fast, it’s that saddle. Unlike the Storck Aernario with its bolt-thru axles front and rear, the Pinarello has regular quick release axles. 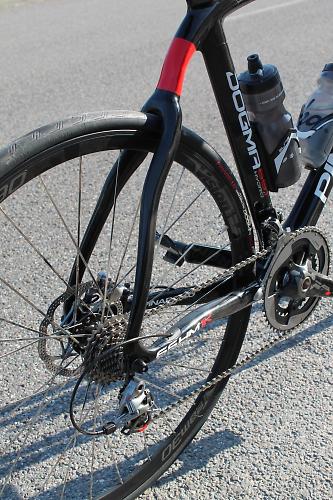 I was fortunate to get a first ride on the new Dogma 65.1 Hydro at Eurobike, during one of Rapha’s organised evening rides. The roads around this part of southern Germany are beautiful. It’s not an area anywhere near the top of most people’s list of must-ride locations, but it really is worth consideration if you’re looking for somewhere quiet with rolling undulating, traffic-free roads set against a gorgeous backdrop.

Hugging the coast of Lake Konstanz to being we, we soon head inland into the lush countryside with fields brimming with tall hop plants, apple and plum trees. There’s a fruity smell hanging in the air. The roads are gloriously smooth, the hills short and brief, and the quality of the riding is superb. This area of Germany has won me over. Anyway, enough about the location... The new Dogma 65.1 Hydro immediately impresses with handling that is refined, engaging and sharp. The frame stiffness is impressive. It’s balanced from the fork to the rear end, which makes it track through tight bends and sweeping fast corners with accuracy and stability. You’re able to propel it through tight bends and fast open sweepers with pinpoint accuracy, and it offers confidence in just how far you can lean it over on the tyres. 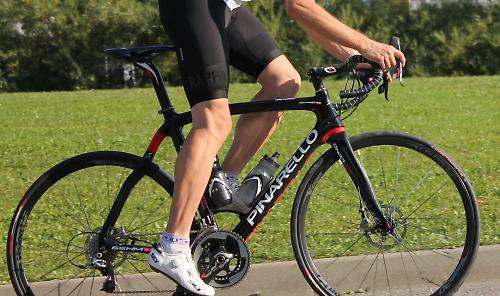 The ride is smooth. Despite the stiffness, there’s no harshness to detect through the contact points. It would be interesting to ride it on typical UK roads because these German roads offer little to challenge a bike's potential to offer comfort. 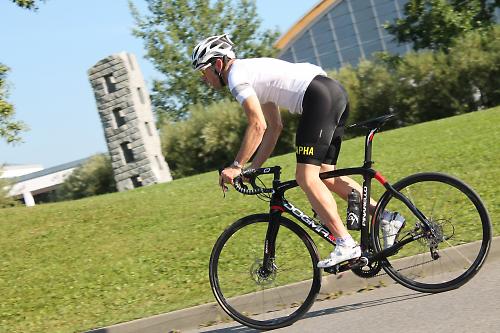 The steering felt a little nervous at first, a bit lively, but after some time I became comfortable with it. This is a race bike after all, and it earns that tag well on this short ride. It requires you to be switched on, alert and engaged. There’s so much that impresses about the ride, and I’m left knowing I need to arrange a longer test ride on the Dogma 65.1 Hydro, and especially on roads I’m more used to.

And the disc brakes?

And what of the disc brakes? Never has a new technology so divided opinion. One thing's for sure, disc brakes on road bikes are here to stay, but it’s clear that rather than wipe out caliper rim brakes, they’ll be offered as an option. And when was choice ever a bad thing?

I rode a Dogma 65.1 Hydro with TRP’s new Hy/Rd brakes, with a 160mm front rotor and 140mm rear. These are really interesting brakes. They’re a self-contained design, the reservoir containing the hydraulic fluid mounted to the caliper with the brake cable running all the way to the caliper. As such they can be used with any mechanical brake lever. Such an approach is smart. It means you can use your favourite brake levers. These brakes have been reviewed on road.cc already, but this was my first experience with them. Putting aside the fact the brakes were the wrong way round for us Brits (the right lever was linked up to the rear brake), I initially found them lacking in power, or more accurately, they were lower than my expectations before the ride. Rolling out on the busy roads with many junctions to negotiate, they initially compared to a set of good caliper brakes, but lacking a little bite. What they do, though, is provide plenty of modulation which allows you to apply the power safely and with control.

So, a little underwhelming at first, but there was one situation where the discs really impressed. Coming to a sudden halt at a T-junction following a 60kph descent with a sweeping bend 400 metres before the stop line, and 50 riders ahead all suddenly reaching for their brakes. The TRPs allowed me to stop both quickly and with plenty of control, with only a small increase in pressure on the brake lever. With regular caliper brakes there are those moments when, wanting to stop rapidly because a car has pulled out in front of you, for example, you pull on the brake levers with increasingly pressure and panic until you manage to scrub off the speed. The discs offered the power and modulation that allowed easier and safer stopping from high speeds.

Do I think the TRP brakes are perfect? No, not really. I feel they could be a bit more powerful, with more bite nearer their maximum. Dave rode them for a lot longer than me for our recent review and in fact he's still riding them his conclusion was that short of a full hydraulic set up they offered about the best braking performance currently available and I'd say that's a fair assessment. Mind you full hydraulics are about to become much more available. The TRP's compatibility with any mechanical brake levers is a huge bonus, though. One thing is clear, it’s still early days for disc brakes on road bikes. We’re going to see a lot of development of the brakes over the coming years. Based on this (admittedly limited) test ride, there’s much to like, but room for improvement.