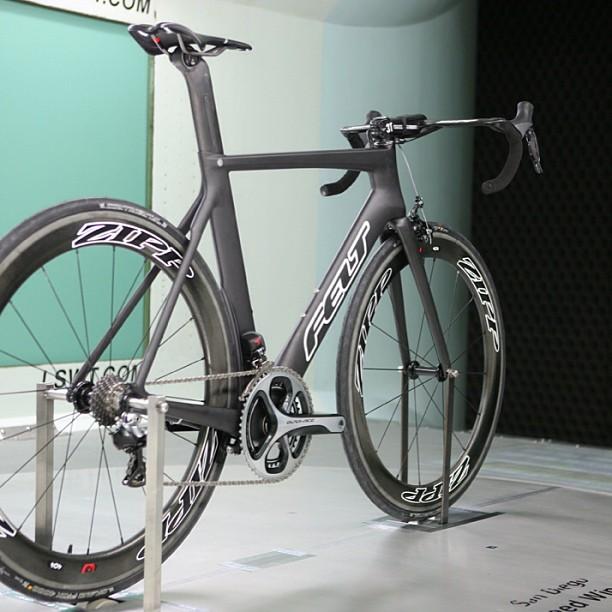 UPDATED: There’s a new AR in the wings; here's a sneak peek and some wild speculation. Now with added video and prices
by David Arthur @davearthur

It’s Eurobike time next week, the biggest annual gathering of bike manufacturers anywhere in the world, and that means a whole load of new bikes and products will be unveiled. Felt, clearly unable to contain their excitement until then, have released a photo of their redesigned AR aero bike on Instagram.

We’ve pestered Felt but they’re not releasing any details until next week. So that leaves us to draw a few conclusions from this one image. The AR was first released in 2005, which feels like an eternity ago. The pace of development in aerodynamics has been quite startlingly, and the AR, it’s fair to say, has been looking a little dated.

The new model has a squared off appearance. Where the old model was all curves and flowing shapes, the new bike is a concoction of straight lines and purposeful details. The top tube is straighter, there’s a similar deep head tube, and the down tube is now straight, rather than curving around the front wheel, as it used to.

It’s vastly different around the rear wheel. A new seatstay arrangement meets a new teardrop shaped seat tube which no longer wraps around the rear wheel. That looks like a new integrated seat clamp as well. And clearly the rear brake calipers have been relocated away to underneath the chainstays, just behind the bottom bracket.

The photo makes it clear that the new AR has been tested in the San Diego low speed wind tunnel, a particular favourite with a many bike manufacturers. All that remains to be seen is how much faster Felt claim these changes make it compared to the outgoing AR. We’ll have the full details when we see the bike in the flesh next week. One thing's for sure, the aero game is hotting up still further.