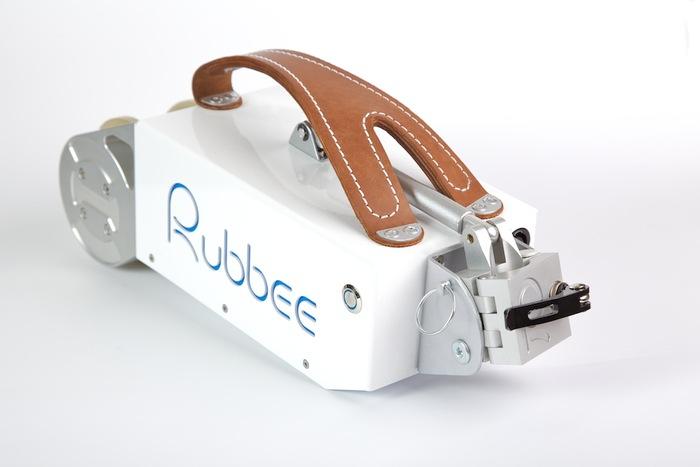 A company called Rubbee is seeking crowd funding for an electric drive that can be mounted to most bicycles in a few seconds.

The Rubbee system is an electric friction drive with an integrated clamp and battery pack that’ll keep you moving for 15 miles.

The design is complete; Rubbee are looking for backing on Kickstarter to move the product into full scale production. You’re probably familiar with the concept by now. People put their inventions onto the Kickstarter site and ask for financial support to get their project off the ground. The more you pledge, the more you get in return. It’s a bit like Dragons’ Den but without the air of smugness.

The system consists of an electric motor that powers a polyurethane friction wheel that works on your rear tyre. It features an integrated suppression system that provides a constant force on the tyre to avoid slipping.

Rubbee reckon that one of their system’s major selling points is the fact that it’s so easy to install. You just clamp it to your seat post, remove a pin so that the friction wheel contacts your rear tyre, connect the throttle (which stays on your bike’s handlebar), and press the on/off button.

The Rubbee system weighs 6.5kg (14lb), has a peak power of 800W and can get a bike up to a top speed of 15mph. The range is 15 miles and the recharge time is two hours. The battery has a lifespan of over 2,000 cycles – so if you recharge it once a day, five days a week, it should last well over seven years.

Last time we checked, Rubbee were getting on for halfway towards the £63,000 that they’re seeking, with three weeks remaining.

Go to Rubbee's Kickstarter page for all the details.