Council gets crabby with locals over promenade signs
by John Stevenson

Residents of the north Norfolk seaside town of Cromer have forced the local council to review signs banning cycling and skating on Cromer prom, even though the council says there is no ban.

A petition on change.org asking the council to remove the ban on cycling on the prom was set up by local man Huw Parker and got 340 signatures. The petition was presented to North Norfolk District Council members Rhodri Oliver and Andreas Yiasimi last week.

The petition says: “On the basis of a single complaint, and without any subsequent community consultation, the council has recently erected signs along Cromer promenade banning all cycles, scooters and skates.

“Cromer is already notorious as the town that wishes its young people were invisible. The well-documented struggle to establish a skate park in the town is still a long way from reaching any kind of successful conclusion.

“And now the council’s actions restrict the opportunities available to young people even further.

Mr Oliver, deputy leader of the council, told North Norfolk News: “There is no ban. Anyone can cycle, walk, or use a scooter on the promenade as long as it is responsible and not endangering anyone else.”

However, the signs, as illustrated on the petition page, read: “Please note. No cycling, rollerblading, skateboarding or scooter riding on the promenade or access slopes.”

Mr Parker said the signs had gone up in the winter, based on a 15-year-old bylaw, and claimed the council told him three weeks ago the ban had been lifted.

He told Mr Oliver and Mr Yiasimi: “The signs are misleading at best.”

Mr Oliver said the signs were not misleading and a council spokesman added: “NNDC would like to point out that no such ban exists – all responsible cyclists, skateboarders and roller-skaters are welcome on Cromer promenade, and indeed on all other north Norfolk promenades.

“The council has been discussing the enjoyment of Cromer promenade by children and adults with bikes, skateboards and roller-skates etc with Mr Parker for a number of months.

“However, despite assurances that any ‘ban’ he might have perceived there to have been in the past did not exist, and that signs have now been changed to make this quite clear, Mr Parker unfortunately appears not to recognise the actions NNDC has taken and is still insistent on delivering the petition, as of course is his right.”

Mr Parker believes the amended signs still don't make it clear that there is no ban. "When we presented the petition last Wednesday afternoon, we were able to get the council to agree to ‘review’ the signage," he told road.cc. "They said that they would be doing so ‘over the next couple of weeks’.

"Until the notices make it clear that there is no ban, the petition remains open." The original sign banning wheeled fun of all kinds, with an unimpressed local. 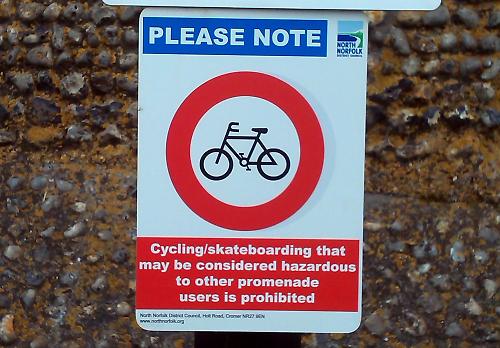 But some signs still have this detail.