Earlier this week we featured Laurens ten Dam’s ride data from stage eight of the Tour de France, which he uploaded to Strava. Following yesterday's stage 11 individual time trial, Juan Antonio Flecha, who rides for Vacansoleil-DCM, has released his SRM data through TrainingPeaks.

The time trial was relatively short at 33km and was won by Tony Martin in a time of 36 minutes 29 seconds, an average speed of 54.27kph. It was one of the fastest time trials in Tour de France history.

Flecha finished well outside the top GC contenders in 46th position, with a time just over 3 minutes slower. From the power data, we can see that he averaged 391 watts for the duration, with a max output of 921 watts. His average heart rate was 155 and he only went as high as 163.

It’s a decent performance, and clearly a very measured and well paced ride, especially considering the tiredness in the legs from ten reasonably tough days of racing and a weekend in the Pyrenees just gone. What this availability of data does is give you a clear idea of just how fast the pros are racing and the sort of power they’re able to produce. Here’s a link to his ride on TrainingPeaks. The data also includes his warmup as well. We must assume his max speed of 117.8 km/h is a blip....

If you want more, Matteo Tosatta’s (Saxo Bank-Tinkoff) ride is available on the SRM website here. 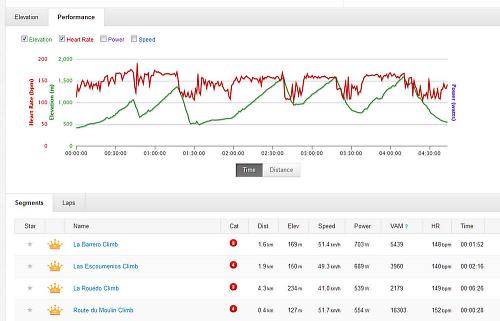 And if you want to continue following Laurens ten Dam on Strava, here’s his time trial performance, pictured above. Like Flecha, he's included his warmup, rather then resetting his Garmin Forerunner on the start ramp, which skews the data just a little bit. Still, you can clearly make out the portion of the ride in this segment (though the ends has been chopped off), in which he bagged the KOM. Doubt that'll be beaten in a hurry.

There is much talk about transparency in the modern age of cycling, and its necessity to instill confidence in the followers of the sport that today's athletes are racing clean. With nearly all riders using some form of power measurement, is the public availability of their power data a logical step forward in delivering transparency of performance?