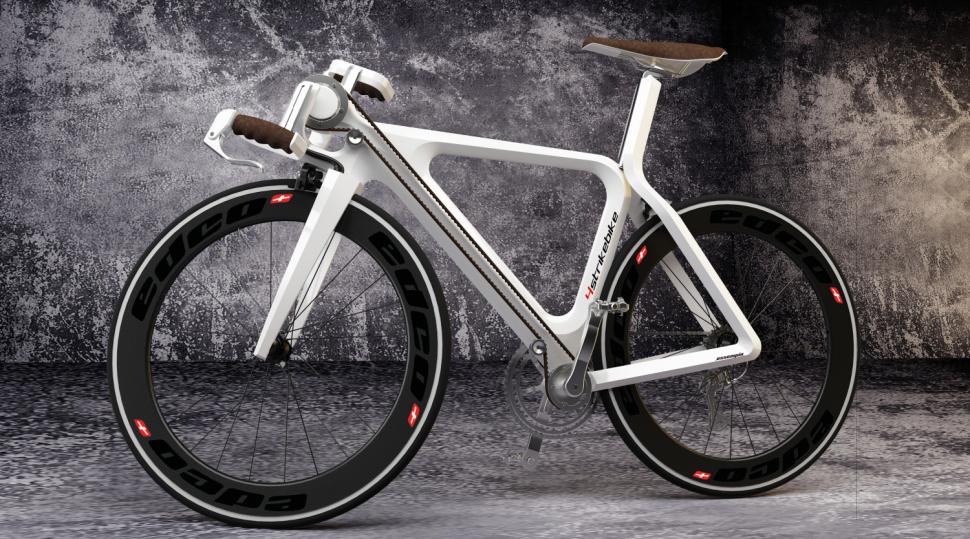 A Dutch surgeon has come up with an unusual solution to the problem of getting more power into a bike: a drive system that combines a conventional pedals and chain drive with a toothed belt powered by hand cranks.

The idea of the 4 Strike Bike is to bring more of the body’s muscles into play. “On a regular bike about 50 muscles are in active use whereas the 4 Strike Bike requires the active use of 128 muscles, i.e. an increase of muscle power of more than 150%,” according to the manufacturer.

To achieve this, the 4 Strike Bike has a patented pedalling mechanism incorporated into the handlebars that enables upper body ‘pedalling’ and steering to be combined. A stabiliser takes care of any potentially problematic steering inputs.

A toothed belt takes power from the hand cranks to the main drive. The hand cranks can be locked so that the bike behaves as a normal bike when the rider is getting on and off. 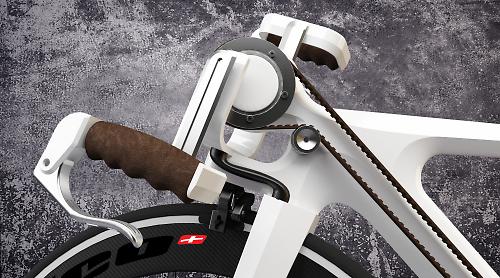 The 4 Strike Bike is the brainchild of retired surgeon Lex van Stekelenburg, who says: “I developed troublesome back and shoulder complaints from years of performing lengthy surgical operations while standing with a bent and crooked posture. To recover from and prevent these problems, I came up with the idea of this bike. I then designed and built the first bike and began to use the 4 Strike Bike successfully.”

Van Stekelenburg’s key claims for the 4 Strike Bike are that it will be faster than a regular bike and provide more balanced exercise because it uses the body’s upper body as well as the legs.

“The 4 Strike Bike makes active use of more different muscles and the use of arm and torso muscles aids breathing, leading to better aeration of the tops of the lungs. The heart has a more balanced workload, now supplying blood to muscles in both upper and lower body,” the company claims.

“This modern bicycle is a faster way of transport on the road, and the bike can be adjusted to suit different traffic situations and personal preferences.”

The maker acknowledges that adding hand cranks to a bike is not a new idea, but claims the 4 Strike’s approach is unique. 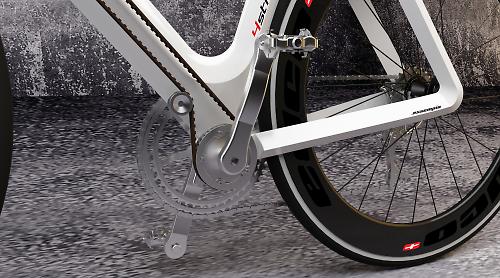 “There have been several strangely powered bikes on the market involving separate use of the arms by the rider while seated upright but not resulting in a harmonious cycling motion,” they say. “There are bicycles with a drive on the front wheel, whereby a non-synchronous, non-parallel, unnatural movement of the arms and legs occurs.

“Other designs have the handlebars at chest height with the rider seated upright. Here the rider pulls on the handlebars without the use of the weight of the upper body and without synchrony between shoulders, torso and hips, with low back pain as a result.”

The 4 Strike is different because the design and position of the hand cranks allows the rider to bring gravity into play. “The weight of the upper body is shifted alternately from the left handle to the right handle and back. The gravitational force of the upper body weight brings the handles and the crank into motion.”

The mechanism is undoubtedly clever, but it’s hard to see how it will be substantially better or faster than a conventional bike.

The folks at Cyclorama.net have this to say on hand-cranked bikes: “The amount of energy we can draw on to propel our bicycles is limited not by how much muscle we can bring to bear but by the amount of fuel we can burn which is in turn restricted by the amount of oxygen we can process. Bigger lungs and/or better lung function will allow us to go faster but extra pedals for our front limbs will just add unnecessary weight and actually slow us down.

“This idea gets rolled out every twenty years or so as each new generation of inventive geniuses discovers bikes and decides to improve them. Bicycles so equipped didn't go any faster a hundred years ago. They still don't.”

You can read all about the 4 Strike Bike on its website. Lex van Stekelenburg is seeking investors to develop the idea, and can be contacted through his ‘Participate’ page.