Graeme Obree has made dramatic changes to the Beastie supine recumbent that he plans to use in September for a crack at the human-powered land speed record, with a new fairing to make the bike even more aerodynamic.

In testing back in November, Obree realised that the previous two-piece shell was not as slippery as it could be, and went back to the drawing board, according to Leo Kent’s latest update on Humans Invent.

Obree said: “The front section is rounded, then it widens out and widens out and then comes back in, in a very smooth curve and narrows down to the back end…the most important part in terms of dividing the air and then pulling the air back in again with the least amount of energy is to have a laminar (non-turbulent) flow over the sides of it.” 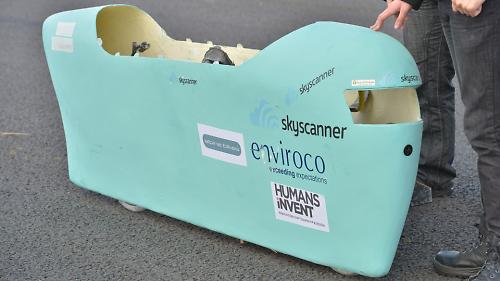 The biggest remaining problems with the Beastie are geting it started and seeing where you’re going. The bike needs a push start because there is no way for Obree to support himself at a standstill, but the new shape is so narrow and slippery that it’s hard for his helpers to get a grip.

“I wanted to go at a great speed right away but the guys couldn’t launch me,” said Obree. “Back when I tested it at Machrihanish airport, I only needed one person to launch it so I assumed it wasn’t that hard to keep me upright and push me in a straight line but because it’s now all slippery and fish-shaped it’s hard for them.” 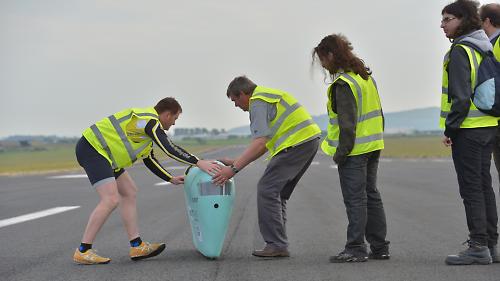 The tests at Machrihanish resulted in Obree cutting a larger hole in the the fairing so he could see where he was going, but if the road surface isn’t perfectly smooth, vision is still a challenge.

“The rattling goes right into your head because you’re so close to the ground,” he said.

In the most recent tests at Prestwick Airport, Obree didn’t get anywhere near the speed he will need to hit when he goes for the record in Nevada. Because he couldn’t see very far ahead, it was hard to gauge the remaining runway. 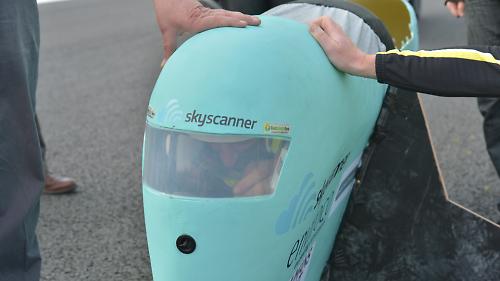 “When you are 2ft 6in off the ground you can’t see how much runway you’ve used so I never actually got to my max speed. Also, you’re over geared because it is really geared to be doing 80 or 90mph.”

Nevertheless, one record that looks to be within easy reach is Jason Queally’s British mark of 63mph. Sam Whittingham’s 83mph record will be rather harder to crack. 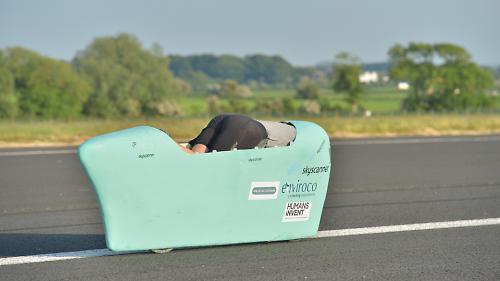 “To go at that speed, and Whittingham is no slouch as a cyclist either, you’re thinking, I have to respect this record, it’s not going to be easy to break. I hope I can but I haven’t gone at any great speeds yet, so really you know as much as I know.”

Here's the new Beastie in action

1
Win! Over £500 of dhb Flashlight winter gear
2
Sir Keir Starmer interviewed by police after crash with cyclist while driving in north west London
3
Are these 30g pedals the lightest ever made? AeroLite Alpha TT-Ceramic pedals are for the weightweenies
4
Egan Bernal facing months of rehabilitation due to spinal condition
5
Fleet Street fury over campaigners' calls to clarify ‘two abreast’ cycling rule
6
Minivan passenger in Las Vegas killed as he pushed cyclist to her death
7
Tao Geoghegan Hart wins the Giro d'Italia
8
Woman arrested on suspicion of manslaughter after female cyclist killed