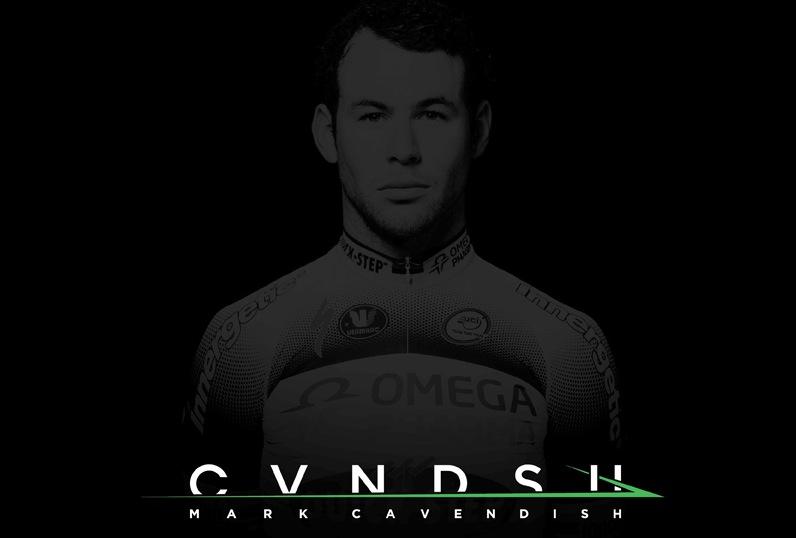 FST AS FCK tagline grabs attention... not all of it positive
by Simon_MacMichael

Mark Cavendish aims to take the yellow jersey on the opening day of the 100th Tour de France on Corsica this Saturday, and finish the race in the green one on the Champs-Elysées three weeks later. The Omega Pharma-Quick Step rider has also announced the launch of his own brand, CVNDSH, which will feature products from Oakley, Specialized and Nike – although it seems to be the FST AS FCK slogan that is attracting most attention, not all of it positive.

Speaking yesterday in London, the 28-year-old, who in recent weeks has achieved two big firsts, clinching the points jersey in the Giro d’Italia and, on Sunday, the British national road race championship said: "I've worn the leader's jersey in the Vuelta and the Giro; I haven't worn the yellow jersey yet so I'd like to do that. It's a big, big goal for a team built around stage wins."

Were he to win that opening stage from Porto-Vecchio to Bastia on Saturday afternoon, Cavendish would become just the third Briton to have worn the leader’s jersey at all three Grand Tours – the others are David Millar and Sir Bradley Wiggins.

However, the former world champion, winner of all five sprints he contested at last month’s Giro d’Italia, including on the opening day in Naples and the final stage in Brescia, said he expects the competition to be fierce.

"It's a strong group of sprinters this year,” explained Cavendish, quoted in The Daily Telegraph. “To get a win won't be easy, especially in the first stage of the Tour.

"History has showed it normally takes me a few days to get into a Grand Tour. Not at the Giro this year, but before that.

"We'll go for it, but you have to show the Tour de France respect - nothing's a given. We'll try our best and see what happens."

Saturday will also be Cavendish’s first race in the colours of British champion after he beat the man who has worn that jersey for the past 12 months, Sky’s Ian Stannard, and Garmin-Sharp’s Millar to the title in Glasgow on Sunday. It’s a prospect he relishes.

"To wear a jersey for a year, to represent my country as the champion, that's a massive honour,” he says. “Hopefully I'll do it proud and show that Great Britain is a dominant force in cycling."

Cavendish, winner to date of 23 career stages of the Tour de France, four of them in the final day on the Champs-Elysées where he has never been beaten, won the points classification in 2011.

Cannondale’s Peter Sagan beat him to that prize in last year’s race and the pair are expected to be the main protagonists in the fight for the green jersey this time round.

"It's the colour I chase," admits Cavendish. "The green jersey in the Tour de France every year is what my whole career goes around."

It’s unsurprising then that the colour features prominently in the identity of his new brand, CVNDSH, which was launched yesterday, and which will feature products from Specialized, Oakley and Nike.

The brand’s slogan, FST AS FCK, has already attracted plenty of comment, not all of it positive, on social media sites such as Twitter.

The brand dropped that acronym from its advertising in 2004 and it now only uses it on certain ranges, but the business has struggled to recapture its former success, not helped of course by the economic downturn that kicked in towards the end of the decade.

So, over to road.cc users in the comments below: CVNDSH: FST AS FCK – or TIRED AS FCUK…?