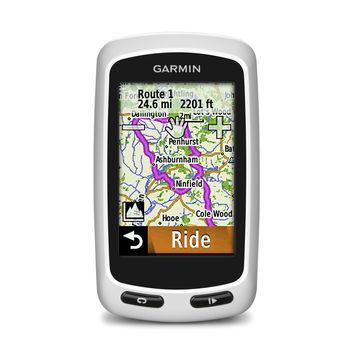 Garmin are launching a new GPS bike computer in the shape of the Edge Touring. It looks like it shares the shell of the new Edge 810.

Interestingly, we’ve had no communication from Garmin about this new model, which is very strange. Usually, we know about their launches well in advance. This time, we just happened to spot the new computer on Wiggle before the weekend, then it disappeared, and now it’s back again. Curiouser and curiouser!

So, all we know about the Garmin Edge Touring is what’s on the Wiggle site. It’s so short that we might as well give it to you in full, so here you go…

“Edge Touring works like the GPS navigator in your car, featured with maps and POIs (points of interest) to help you find your way by bike.
• On-road or off-road navigation with preloaded Garmin Cycle Map
• Input a distance and choose from up to three round-trip ride options
• Plan and download new routes to follow
• Relive and share your rides with Garmin Connect or Garmin Adventures
• Points of Interest (POIs) specifically for cyclists
• Rugged and waterproof design
• Includes quarter-turn bike mount”

We’d also be interested in knowing about the runtime too. Garmin claim up to 17hrs with the 810 (although it’s considerably less with the Bluetooth functions enabled).

The chance to get three suggested round-trip options for any given ride distance sounds like an interesting feature, and one that features on Mio computers. The points of interest for cyclists could be good too, although we've yet to see it in action so we'll reserve judgement on that.

There’s no price given and no details on availability yet – although the fact that it’s listed on Wiggle suggests the release is imminent. Of course, we’ve contacted Garmin asking for more info. As soon as we get any, we’ll update you.