Production version of striking concept is due for release very soon, here's a video and some photos
by David Arthur @davearthur

Manufacturers do love to tease us with video sneak peeks of upcoming product launches, and the latest to follow this trend is Factor Bikes. They've just released the video below which gives a glimpse of their first ever production bike, the Vis Vires, which follows on from the striking concept Factor 001 we saw from them back in 2007.

The video above shows the first glimpse of their highly anticipated production bike which is based on their state-of-the-art Factor 001. That bike, designed by BERU F1 Systems, a company which as their name suggests is involved in Formula One, boasted a cutting-edge carbon frame design, advanced electronics with over 100 channels of biometric data, full hydraulic disc brakes, and lithium polymer battery system supplying power to the on-board computer and sensors. And with a £20,000 price tag to match. Many of the high-tech design features also featured in the Aston Martin superbike launched last year. The Vis Vires appears to distill some of the essence and design features of those expensive concepts into a production road bike that we assume will have a more realistic price tag. They still claim it offers advanced electronics capable of allowing the cyclist to monitor their technique (so we’re guessing it’s got some sort of power meter integrated into the cranks to allow left and right leg analysis), but a clear reduction in complexity should make it a more practical road bike that we might see on the shop floor, and not in the Science Museum. They’re not giving much away at this stage, so don’t ask us how much it costs or anything like that yet. Or when it goes on sale. We don’t know yet. While they’re being cagey with the final details, it’s clear from these photos, and the rideable prototype photos they released on their Facebook page a while back, that the production bike carries very similar lines to the early concept.

There’s the  distinctive head tube and fork with integrated stem, but there’s no hydraulic disc brakes, instead they’ve fitted mini V-brakes. The reason is unclear, it could be they're deciding to wait for road hydraulic disc brakes to mature (SRAM is the only big player to release a disc brake groupset), or perhaps they're hoping to get it rubber stamped by the UCI, in which case becaused disc brakes aren't allowed in UCI sanctioned events, the disc brakes would have to have gone.Or it could be down to aerodynamics, they've fitted mini V-brakes, integrated into the fork and chainstays like we're seeing on many aero road bikes, and along with the integrated seat clamp and tube profiles, suggests that aerodynamics might have been a key design criteria wit the Vis Vires. 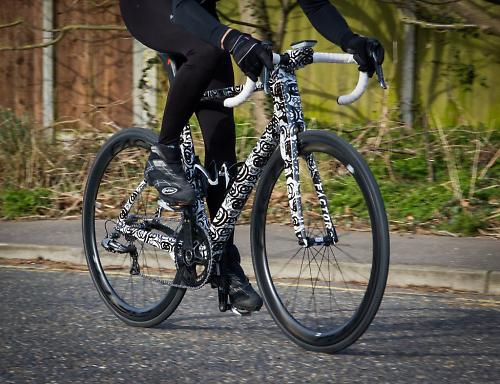 What else can we tell you? Well the eight spoke wheels have gone, they look to be using regular 50mm deep-section carbon wheels instead. Other standard off-the-shelf components include a Shimano Di2 electronic groupset so the frame we can assume features internal cable routing. The rear brake appears to follow the aero trend and is tucked away behind the bottom bracket on the underside of the chainstays. On the non-driveside chainstay is a small sense, similar to Trek’s modular ANT+ sensor. Another noticeable change is the complex GPS head unit that gathered data from  the multi-channel ergonometric data recording system, well that has disappeared. Instead they’ll be supplying each bike with a custom Garmin Edge 810 like this one. We can envisage these changes should ensure it has a more realistic price tag than the early concept, but we don’t imagine that it’ll be cheap. We’ve got no official launch date, other than sometime this year. Watch this space. In the meantime, check out their website for more info www.factorbikes.com