Bianchi have launched a new version of their Infinito endurance bike, the Infinito CV, with material technology that’s designed to reduce muscle fatigue and increase control, and it’ll be available in both standard and disc brake formats.

The big news is that the Infinito CV is built with what is called CounterVail Vibration Cancelling Composite Technology – exclusive to Bianchi in the cycle industry – that’s designed to deal with vibration from the road.

The Infinito is designed to be fast and also to be comfortable over long-distances, the new version being the bike that members of the Vacansoleil-DCM have been spotted using for the cobbled Classics. Earlier in the week we showed you Juan Antonio Flecha aboard the Infinito CV at last Sunday’s Tour of Flanders. Team members will be riding the new Infinito CV across the pavé at this weekend’s Paris-Roubaix. Bianchi have co-operated with the Material Sciences Corp on the development of the Infinito CV. The CounterVail is a viscoelastic material embedded within the bike’s carbon layup. Bianchi claim it has 75% more vibration-cancelling capacity than other (traditional, if you like) carbon frames. It's important to clarify that this is not a suspension system (Bianchi have been down that road on the past in the early 90s) – there are no additional moving parts here. Bianchi demonstrated CounterVail effect by putting a table tennis ball onto a frame section that was subjected to high-frequency vibration. It bounced around all over the place on normal carbon, but just juddered on the CounterVail. 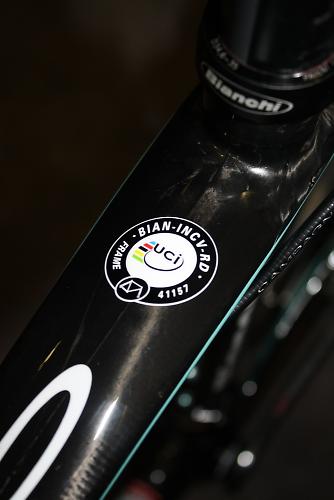 Bianchi say that the key benefits to using CounterVail are these:

They also say, “Traditional passive damping of the frame using superficial rubber inserts and isolators are only marginally effective compared to the integrated carbon Countervail system developed by Bianchi and proven in the extreme conditions of NASA aerospace operations.

“With its patented carbon fibre architecture and viscoelastic material, Countervail carbon material is embedded within our unique Infinito CV carbon layup to cancel vibration while increasing the stiffness and strength of the entire frame.”

So, whereabouts have Bianchi added the CounterVail technology? Well, they're being very Secret Squirrel about that. They say that it's used, "In strategic areas of the frame and fork". They want to keep it to themselves to retain the competitive edge. It's in the stays, definitely, but we don't know the exact positioning of the CounterVail or the exact extent to which it's used. 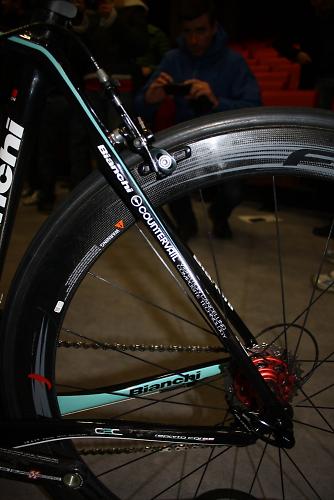 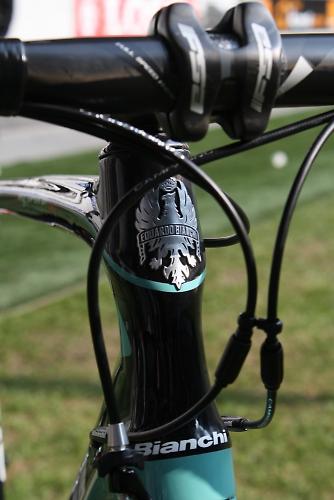 The Infinito CV comes with an oversized BB30 bottom bracket and a single model is compatible with both mechanical and electronic shift systems. It’ll take tyres as wide as 28mm and various builds will be available. The Infinito CV, like its predecessor, fits into Bianchi’s C2C (Coast to Coast) line-up, meaning that it’s designed to be fast and light but with a geometry that’s not quite as aggressive as their Oltre, for example.

That’s not to say that the Infinito CV is in any way sit-up-and-beg. Far from it. But it is a little taller in the head tube than the Oltre XR for a slightly more upright riding position. The 57cm model, for instance, comes with a 56cm effective top tube and an 18.5cm head tube. It's available in eight sizes, 47 to 63cm. 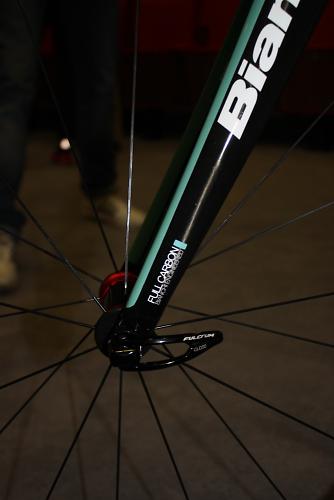 In a move that's indicative of where road bike design is heading, the Infinito CV will be available in a version for hydraulic disc braking. Very interesting. Bianchi didn’t say whose brakes they have in mind but we reckon you should standby for a new launch into this market very soon.

Bianchi are using the post mount standard and the Infinito CV will accept 140 and, with an adaptor, 160mm rotors. The rear hub on the disc brake version will have 135mm spacing. The frame will be reinforced with extra material around the stays and the fork will be beefed up too. This means that the disc-compatible frameset will be about 100g heavier than the version for standard brakes. The Infinito CV will be available in Bianchi’s traditional celeste, naturally, and in black, black/red and black/celeste.

It'll be available from June. We'll give you details on builds and prices as soon as we get them.

We're in France for the new bike's launch and we'll be riding it on the cobbles tomorrow. We'll let you know how we get on as soon as we're back.