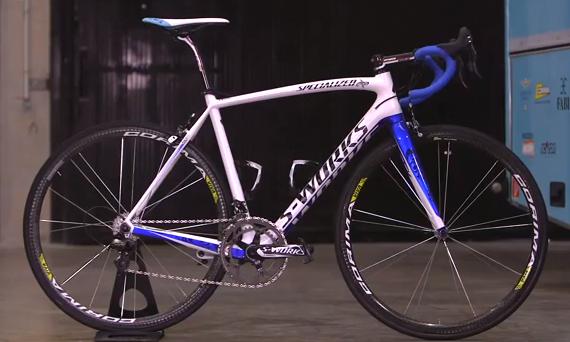 Bike mechanicing art, craft, or both discuss? There's certainly plenty of both on display in this video which shows Astana mechanic Tosello Grabrielle building up Nibali's bike from scratch.

It's a beautiful thing to watch a pro team bike mechanic at work, a couple of years ago Mat and I had the chance to see the Astana mechanics building up the team bikes ahead of the 2011 Tour de France Grand Depart - they were a mixture of SL3s and SL4s including Rémy Di Gregorio's blood spattered machine, the following year Di Gregorio's cycling career came to a sticky end when, by then riding for Cofidis, he was arrested at the team hotel on the Tour rest day on suspicion of drug trafficking. But I digress, like all pro mechanics at the top of their game that day in France they made it all look very easy indeed.

As you'd expect this is no ordinary SL4 (though that's probably not the right word to use about such a high spec piece of kit) no this one features a custom paint job specifically for Mr Nibbles with a shark motif designed especially for him - he's from Messina in Sicily and his proper nickname is not in fact Nibbles, but the far cooler Shark of the Straits. So the bike features a blue shark on a blue background - in fact a number of them. Interestingly too, if you keep a sharp eye out you'll notice that he even has the shark logo on his base layer… or maybe that's a very big tattoo showing through? Of course now that Nibali is wearing the maglia rosa they will probably trot out a pink version.

This bike itself looks to be a standard Astana team build, Specialized finishing kit, cranks, bars and stem teamed up with Corima wheels - Astana are the only team to run them, and The Shark is a fan (you wouldn't expect him not to be). This season the Kazakh outfit switched from SRAM to Campagnolo drivetrains and the one difference from the official team spec is that Nibali seems to be running the mechanical version of Campagnolo Super Record rather than Super Record EPS - which  was fitted to another of Nibali's bikes that we had a look at a couple of months back.

In the normal run of bike industry product cycles we would expect the Tarma SL4 to be replaced fairly soon - two years is about the maximum lifespan for a top of the range bike, and that's what the SL4 will be by the time the Tour rolls around in July. So an SL5 soon? The only question to ponder on that one is how much more stiffer and lighter the bike can actually be made.