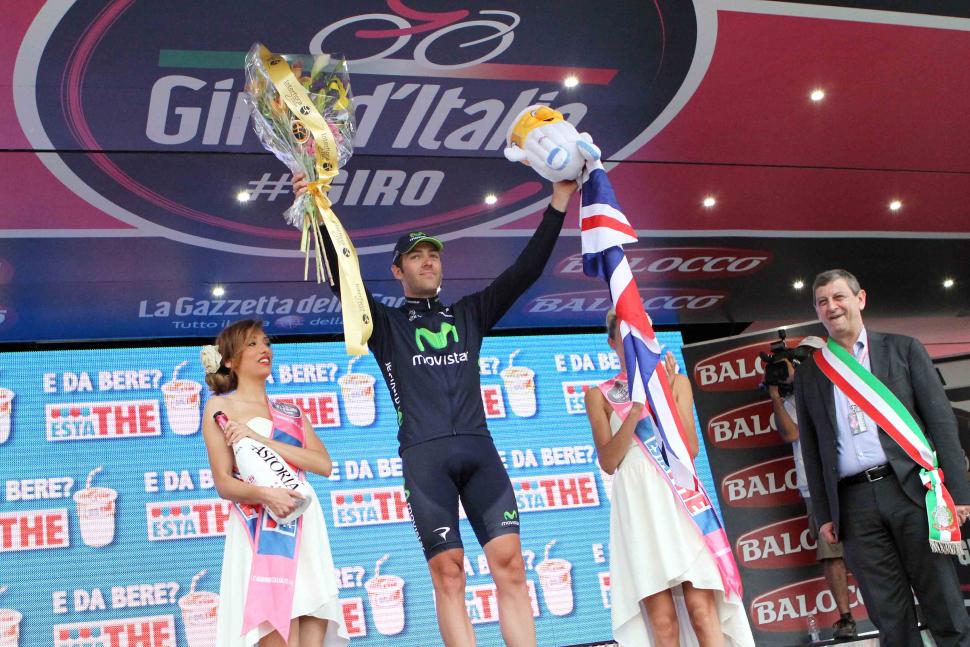 What a big day that was at the Giro - a British rider on a Pinarello took the individual time trial, but it was Alex Dowsett, not Sir Bradley Wiggins, while Vincenzo Nibali, who shipped big time to his rival against the clock during last year's Tour de France, limited his losses today to just 10 seconds and takes the maglia rosa. Whie the puncture Wiggins suffered today partly explains that, as the video at the end of this article shows, Nibali has done a lot of work to strengthen what was one of the weaker parts of his all-round game.

One of the reasons Dowsett left Team Sky for Movistar at the end of last season was to get the opportunity to ride in Grand Tours - the Giro is the first one he's ridden - but even in his wildest dreams the 24-year-old from Essex couldn’t have imagined that his name is now on the list of Giro d’Italia stage winners following his victory in today’s individual time trial.

Dowsett faced a long wait to see if his time would be beating, former team mate Wiggins coming closest, 11 seconds down on his fellow Briton but crucially unable to take anything like the time he would have anticipated off rivals including Astana’s Vincenzo Nibali, who finished a further 10 seconds back and moves into the maglia rosa.

"It will take a bit of time before I realised what I have done, I still can't believe myself,” reflected Dowsett afterwards. “It was quite a harder TT than I expected; without a doubt, the hardest in my life.

“I took some extreme gears, a 55-29, to fight such different sections. The last climb seemed like it was never going to end, a cloud in my eyes as I believed I could never reach the finish.

“Before the start, getting into the best ten would have been enough for me, so being able to notch up the victory is amazing. The team had given me confidence to take things easy in the first week, thinking of this day. This was my goal, the day when I wanted to do my best.

“My personal ambitions are more than fulfilled with this victory, and from now on, my only duty will be working for my team-mates. Beñat [Intxausti, race leader this morning] lost a bit of time, but we will try to get him back close to the best overall again."

Team Sky’s Wiggins looked frustrated as he crossed the line 11 seconds down on Dowsett, a puncture forcing him to change bikes early on during a stage when he would have hoped to claw back at least the minute and a half he lost to his GC rivals when he crashed towards the end of yesterday’s Stage 7 to Pescara.

“I think there was some initial disappointment because I wanted to win the stage," confessed, the Tour de France champion quoted on the Team Sky website.

"It’s been a challenging few days with the crash yesterday and then to come back up. It wasn’t an easy course. I’ve said all along that it wasn’t one of those ones where you could take three or four minutes out of people because it was so technical at the start.

"Then obviously to have a puncture and have to change bikes and disrupt the rhythm is never going to help. But then the second part of the course was really suited to me and I took back a lot of time on people there. It is what it is and it’s put us right back up there now. It’s going to be a hell of a race for the next two weeks."

At the second intermediate time check, just before a 35 kilometre climb to the finish, Wiggins was 59 seconds down on Dowsett, but put in a huge effort to reduce the deficit to just 11 seconds by the time he crossed the line.

“I think I rode it pretty well," he said. "I was a bit ruffled after the bike change and didn’t get the best out of myself on that technical part of the course. It was a bit damp still as well so I was a bit cautious – especially after crashing yesterday.

“But from Pesaro onwards [the first intermediate time check] I really got into my stride and I think physically I was as good as I’ve ever been. But it is the way it is. We’ll deal with it now, but I’m pleased at the same for Alex Dowsett. It’s a brilliant start to his Grand Tour career.”

Prior to the Giro starting last Saturday in Naples, most predictions were that Wiggins would have gone into the maglia rosa after today’s stage with time in hand over his rivals, giving him a margin to defend ahead of the first big mountain stage on Tuesday. That’s not how things have played out, though Wiggins remains optimistic.

“There are two weeks to go,” he pointed out. “The last week’s going to be very difficult and the time gaps are relatively small still. A minute and 16 to Nibali, still with all the problems yesterday isn't that bad it’s all to play for. It’s not easy to defend a Grand Tour lead so it’s not a bad position to be in.

Likewise, Nibali appreciates there is a lot of racing left in this Giro, although he’s understandably satisfied with how it has gone so far.

"The Giro is not over,” he maintained. “We still have two very difficult weeks ahead of us, with many tough days in the mountains.

“But we had a very calm first week to get me to the start today as fresh and as ready as possible.

“A good result here in the time trial is the result of a lot of preparation in the last six months, by me, by the staff, by the other riders in the team.

“The Maglia Rosa only fits on my shoulders, but everybody who went in to organising our time trial training pulls it on over their head on the podium."

His team manager at Astana, Giuseppe Martinelli, added that today’s stage had been a good guide to the riders that are in form among the GC challengers.

“Both are excellent climbers in the high mountains and both have strong teams behind them.

“And Bradley Wiggins is by no means to be underestimated in any way, shape or form. He is a fierce competitor and has an exceptional organisation supporting him.

“We do not discount him one bit, no matter what has happened in the last days," he added.

In last year’s Tour de France, where he finished third behind Wiggins and Chris Froome, Nibali lost big time in the individual time trials. It’s a discipline he and the team have worked hard on over the winter and during the early season, as this video from Astana shows.