London’s Tokyo Fixed have have added the brand new Trooper CX to their range of ‘house’ frames as well as an updated Dart, a fixed wheel track racer, both of which were first unveiled to the public at the recent Spin London urban cycle show.  Both frames are about 8-10 weeks away from arriving at their shop. First the Trooper CX. It has been built for versatility according to Tokyo Fixed founder Max Lewis, and that means you get the necessary mounts to fit a rack and mudguards, with extra clearance for wider tyres. It’s built from a double-butted chromoly tubeset with a lugged seat tube and cables, in good old ‘cross fashion, routed along the top tube so they’re well out of the way of mud being sprayed onto the down tube. Like regular cyclocross bikes, they’ve given it cantilever brakes. “You can go gravel flat-tracking, burning down fire roads, slide through the mud in a cross race or take it touring,” reckons Max, which sounds like the sort of mix that we’re fans of here at road.cc, along similar lines to the Genesis Croix De Fer, for example. 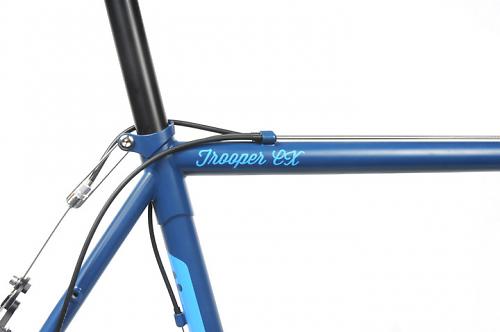 This build here, which includes a Shimano Ultegra groupset, hits the scales at 9.6kg. Tokyo Fixed will be selling it as a frame-only package or with the steel crown fork pictured, the latter priced at about £375, although that has yet to be confirmed. The Dart, meanwhile, is an update on their fixed wheel track racing bike that is happy at home on the boards or on the city streets. The key changes centre around increasing stiffness and they’ve achieved this with a new 44mm zero-stack head tube and oversize main tube. They custom source the chromoly tubeset and claim no one else is using it. The all-up weight of the bike pictured is 7.8kg. 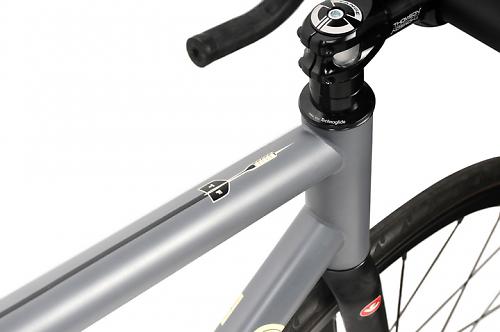 Like the Trooper, no actual price has been confirmed yet, with Tokyo Fixed suggesting that it could be around £325 with a carbon fork. 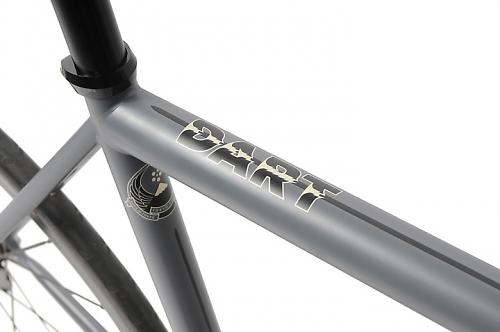 The graphics for both frames are the work of Californian designer Will Rei, who has chosen a deep blue with sky blue highlights and decals for the Trooper and chalky matte grey with cream ivory decals for the Dart. Keep an eye on www.tokyofixed.co.uk for the arrival of these new frames.