Britian's first urban cycling show, Spin London too place at the Truman Brewery in Brick Lane over the Bank Holiday weekend if you didn't make it along here's a little taster of what you missed.

This was a bike show with a difference, it had the rootsy, homegrown feel of Bespoked Bristol - and indeed some of its exhibitors too - but as well as frame builders it included other urban bike brands and whole section of cycle clothing for the man or woman about town by bike. There were also lots of small bike and clothing companies that we were only seeing for the first time. The likes of Festka, Moss, Otto, and Avenue. 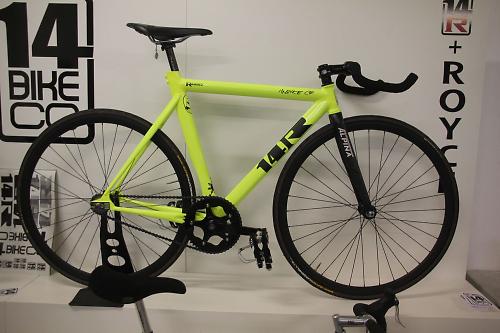 As you would expect there was more than a smattering of fixed gear bikes, but there were plenty of the geared variety on display too and even most of those showing fixed gear machines were at pains to point out that they also had plenty of geared bikes in their ranges too - there's not doubt that the momentum in urban cycling has swung decisively in favour of more more cogs, and the freewheel. 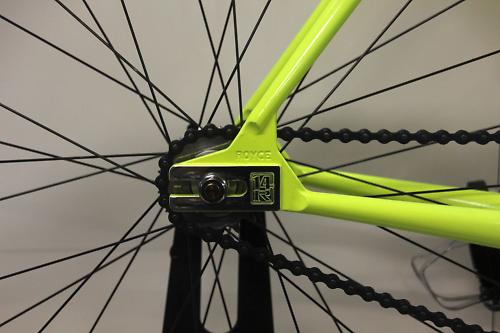 That shift could be clearly seen on the 14Bike Co stand. As well as some lovely fillet brazed fixed gear machines featuring dropouts and cranks specially made by Royce there were two very interesting road bikes. 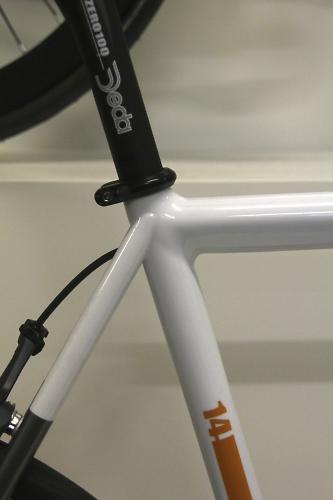 One a steel race bike made from light weight Columbus Zonal tubing - in some respects the frame is similar to the new generation of race oriented steel frame we've seen coming out of Portland in the US, but unlike Tonic the 14 is filet brazed rather than TiG'd. The guys from 14Bike Co reckoned the frame and fork weigh in at around 1.35Kg. Helping to keep that weight down is special lightweight paint - it saves 100g per frame which is one of the helpful spin-offs of the company's collaboration with the Force India Formula One team. As you'd expect though the main area they are looking to explore with the F1 boffins is carbon fibre technology. 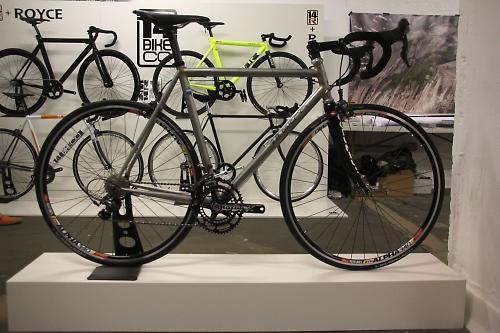 The other 14Bike Co road bike to catch our eye was this lovely full custom number again in Columbus tubing that was pretty much the first bike you saw coming in to the show. This was a more conventional looking machine, frame weight is about 900g. To my eye at least those chainstays looked short - an echo of 14's fixed heritage perhaps - so I'm imagining this would deliver power fairly instantly to the back wheel making for a snappy nimble ride. Nice (as they say on Jazz Club).

Being based on Brick Lane 14Bike Co had to bring their wares all of the a few hundred metres to the show, just along from them though were Festka - the outfit who'd probably travelled furthest to get here - from the Czech Republic to be precise. They certainly brought some attention grabbing machines… especially if you like pink. 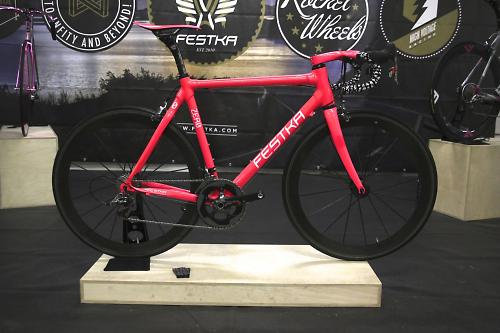 Bikes, and indeed very little else, don't come much pinker than the Festka Zero. It's pink with a capital P. Built using a carbon lug construction (well, if it's good enough for Colnago) from Compotech EM carbon tubing designed specifically for bikes - the whole frame, including the tubes and lugs is made in the Czech Republic. Interestingly too, Compotech - a Czech high performance composite manufacturer specialises in damped carbon fibre tubing, no info on whether these particular tubes are damped but if they are it should be a smooth riding bike. 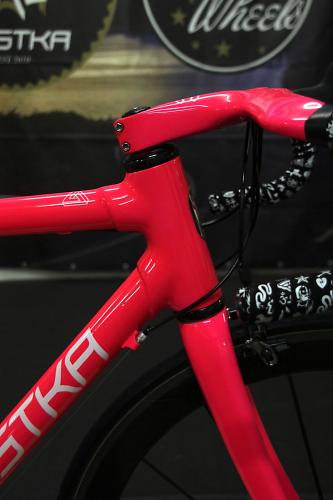 The big advantage of lugged carbon construction is that it makes it easy (relatively) to build a custom carbon bike - that's why Colnago use it. The Zero comes in three flavours: Standard; Race - which has 30 per cent more carbon for extra strength; and Divan for a more comfort oriented ride - according to the Festka website "The tubes contain elastomers that absorb vibrations while do not subtract the strength and stiffness of the frame" possibly something has been lost (or gained in translation) but I'm wondering if that's the damped carbon? 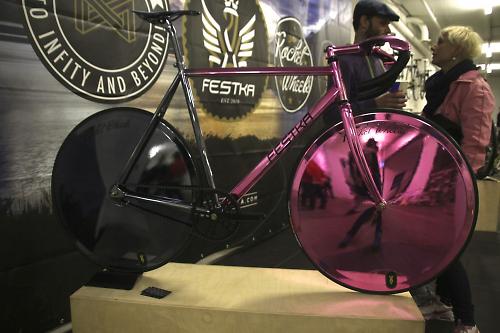 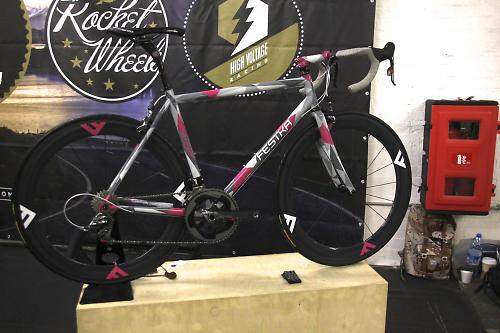 The Zero wasn't the only pink thing on the Festka stand - there was also the limited edition Motol Chrom track bike in metallic pink, the limited edition XCR Pablo also had the odd touch of pink. Every year Festka produce a 25 bike limited edition bearing a design inspired by someone who has influenced them - this year it's Pablo Picasso. 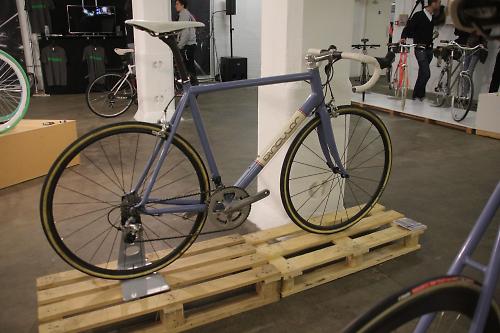 More pastel shades on the Singular stand which featured the lovely Osprey road bike (our compo frame winner will be getting his soon) and the Kite cross bike and this lilac lovely which you won't fine on the Singular website (believe me I looked). In a post show email Sam from Singular explained that it's an experiment/prototype road bike,  something sportier, more modern and made from lightweight tubing. 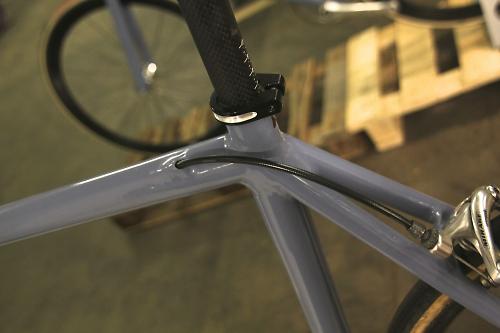 The show bike is made from aluminium (which I wouldn't have guessed) but any production version would be steel. It's certainly a purposeful looking bit of kit that put me in mind of the Tonic Vanishing Point or the Taylor Stoemper - both TIG welded steel frames with oversize tubing to stiffen things up without losing too much of that steel ride comfort. Sam reckons that it'll probably be 2014 before any production version of the bike that currently has not name is ready. Definitely one to look out for when it does. 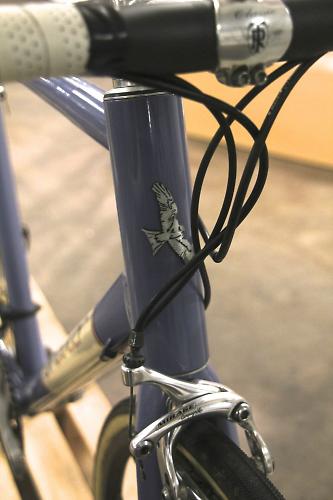 It had all gone black at the ColourBolt stand where interesting bikes with interesting (black) finishes were the order of the day. Most interesting of all possibly was their winter road bike which like a number of the other machines on display featured an amazing cool looking and super-durable crazed powder coating… erm, coating achieved by heating up the powder coat until it crazes. The result is a matt coating with a slight satin sheen to it that feels slightly rough t the touch. Powder coating is amazingly tough stuff and this variation is probably even tougher - ideal for urban bikes or winter trainers that have to take cycling's hard knocks in their stride. 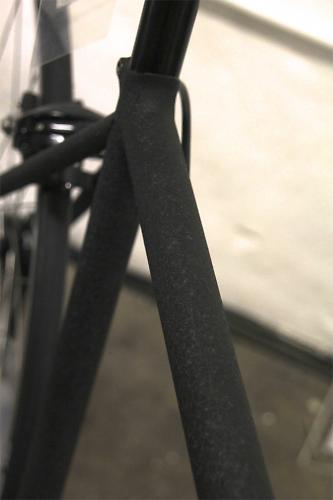 Here's their Drenched Black road bike made from Columbus Spirit tubing with XCR chain stays - it's a bike designed for the wet… it's cool but just imagine what your dry weather bike would be like if you could afford to have XCR chain stays on your winter one. 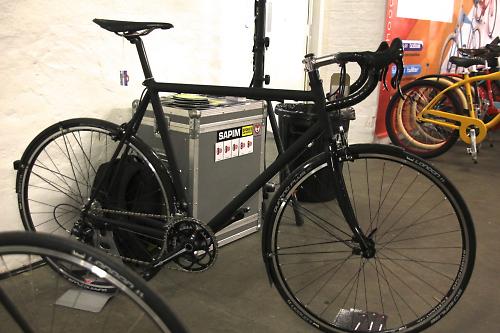 Like ColourBolt - Saffron Frameworks demonstrate that just because you build your own bike it doesn't mean you have to play it safe. Matthew Sowter the man behind Saffron won the prize for best utility bike at last month's Bespoked Bristol Show and as you'd expect his prize winning machine was on display at Spin (with rosette) but it was two other bikes that really caught my eye - neither of which you'd probably describe as urban machines. First up, this steel singlespeed voted Best in Show and built for round the world cycling record breaker, Mike Hall - Mike intends to ride this across Vietnam later this month, he's got an engineering background and he's ridden a very long way, very quickly so he was very specific about what he wanted from his bike, this is his design, Matt had the job of turning it in to reality.  Things are kept traditional at the front end with a curved steel fork and a bi-laminate lugged head tube… after that tradition goes out the window and things get curvy including the top tube and seat stays. 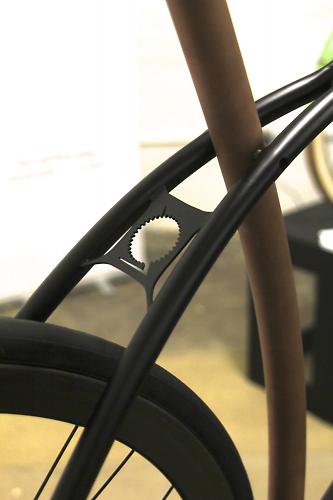 The brakes are discs but a lot more radical than that the seat tube is the curved chromoly steel - painted grey at Bespoke, but sporting a much more fetching copper plate coating now - designed to give a mega comfortable ride AND to be detachable for easy travelling.  It really is a very elegant piece of work 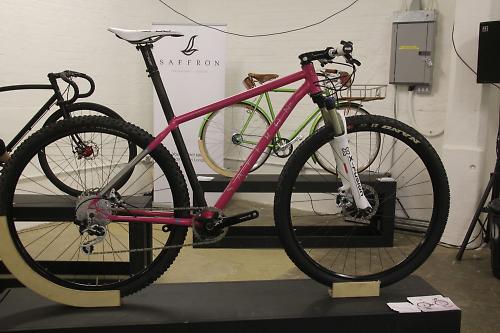 Back to pink, and what's this? A mountain bike (interestingly there were quite a few MTBs at Spin) not just any old MTB though… this one was built for road.cc's very own Vecchiojo and apart from being pink (technically it's magenta apparently) it's also the first 29er specific 931 tubeset made by Reynolds. It's not all steel though, the seat tube is made from a single piece of wide diameter tubing that slots directly in to the bottom bracket in a similar way as the one on Mike Hall's bike - no word on whether it's detachable but there  does appear to be a bolt of some sort there. 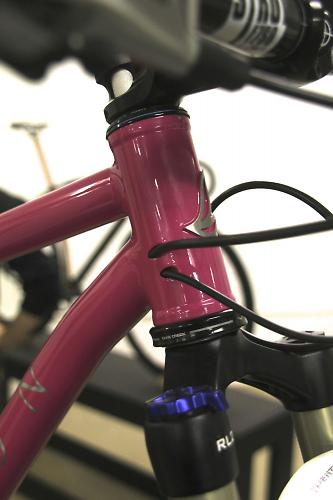 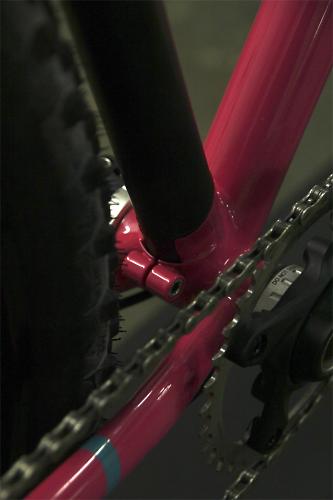 Jo likes to keep things tidy so all the cables are internally routed, he also likes to keep things responsive (well maybe not emails or phone calls) but defo stuff to do with bike handling so the geometry has been dialled to his riding style… I suppose we'd better pay him soon so he can actually go and ride it. 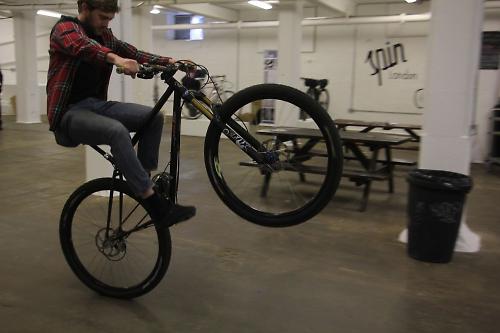 1
Video: Driver calls 999 to report cyclist for not getting out of her way
2
Brompton reels from impact of Brexit and Covid
3
Complaint against Daily Mail upheld over false claim that campaigners wanted “abuse of cyclists to be made a hate crime”
4
Rider thrown out of Tour of Flanders for tossing water bottle towards fan says being given one as a kid inspired him to become pro cyclist
5
New version of Countryside Code urges people to be nice to each other when enjoying the outdoors
6
Vittoria launches run-flat Air-Liner inserts for road bikes
7
Near Miss of the Day 566: Royal Mail van driver nearly hits pedestrian then cyclist
8
Five cool things coming soon from Giant, Sidi, PRO, SunGod and Bontrager