Reynolds think so, and they've got the URL to prove it...
by dave atkinson

Reynolds have joined forces with renowned composites guru Paul Lew to bring the world the RZR wheelset, and at under 900g for the tubular-rimmed set (the clinchers will be finished by early 2010) they're certainly pushing the envelope in terms of weight. And it's not just another carbon wheel in the same mould (as it were) – there's some new thinking beneath the surface of the RZRs.

Paul Lew has an unparalleled CV where Carbon bike wheels are concerned. Back in 2004 he was teaching manufacturing processes to Shimano to help them develop their WH-7800 wheelsets, and Lew's own wheels were winning multiple Ironman titles, Olympic titles and Tour stages. Lew sold his proprietary techniques to Reynolds a while back, and now he's working with the Utah-based company to produce a wheelset lighter even than the ones that have previously borne his name. And with the larger volumes that Reynolds can produce, the price might even come down to a point where mortals can add them to the wishlist: Lew's hand built custom VT-1 sets didn't leave you with much change out of $15,000. 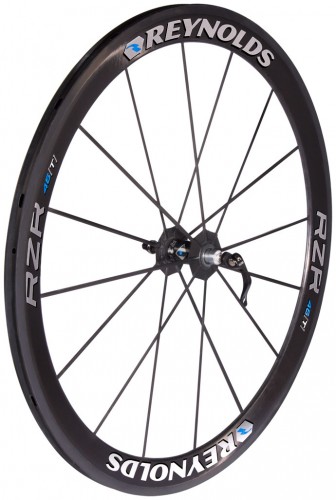 Technology-wise, the RZRs use a unidirectional Carbon rim and a composite hub, laced together with Carbon airfoil spokes. "The RZR concept", say Reynolds, "begins with the spokes", the big difference being that the spokes aren't tensioned. Because Carbon isn't particularly reliable in compression, Reynolds have attempted to eradicate the one-third of the wheel revolution the spokes are compressed. Their modelling shows that with no tension in the spokes the forces are much more evenly distributed meaning the spokes are less likely to fail.

The rim has been redesigned too, to work better with the zero tension spokes. It's still a unidirectional composite structure though, a feature brought through from Lew's own wheels, and Reynolds claim their 'Swirl Lip Generator' helps to improve areodynamics.

The most obvious change to the naked eye, though, is in the rear hub. Instead of the usual two flanges, the RZR has three: two where you'd expect to find them, and a third directly in line with the rim, which Reynolds claim helps to trasfer torque to the rim without pulling it out of line. Up front, where drive isn't an issue, it's a standard two flange arrangement with radial spokes.

And how do they ride? Well, Reynolds make grand claims for them, and since they're well under the kilo we'd expect them to be super fast. But we'll reserve judgement until we've seen them in the flesh... watch this space. For more on the RZRs, head to www.theworldslightestwheel.com