A chat with Dániel Merényi at Bespoked Bristol 2013

Hungarian Dániel Merényi learning how to build frames from one of the undoubted masters, Dario Pegoretti. He spent four years learning the art of welding steel frames under his watchful eye, and having picked up more knowledge than is possible to print in a book, decided to go it alone and set up his own business, Merényi Bicycles. 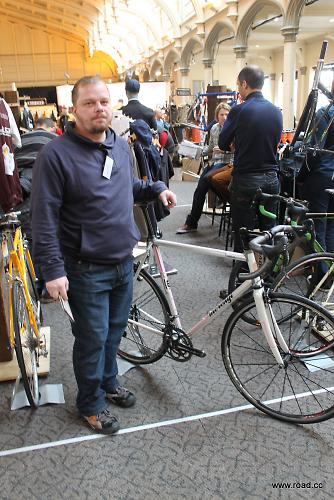 He was exhibiting at Bespoked Bristol for a second year, both with his stand own and on the Mosquito Bikes' stand - they bring his frames into the UK. I used the opportunity of his visit to the UK to have a chat with him about his experience with Pegoretti and the art and craft of building his own frames.

road.cc: When did you start Merényi Bicycles?

Dániel Merényi: I started in the workshop of Dario Pegoretti, it was 2006 and I started my own business one and half years ago. 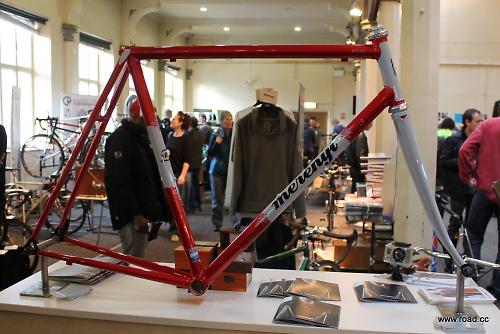 How long did you go work with Dario for? And what was it like working with him?

It was four and a half years.. It was amazing, really, just like working in a temple. He knows so much, he thinks really different about bikes and he explained to me the design, how bicycles work. He always said to me you have to read books, you have understand physics, you have to understand geometry, why this happens and that. Then let’s buy some books on metallurgy and read everything, and then throw it away, and try and find your own path.

Was he happy to share everything he knew with you?

Happy, no no no. I had to steal everything by drops [laughs]. I had to wait till the right moment to place the right question. So it was not very easy. Now you’ve set up your own business, what’s the aim and what are you hoping to bring to the cycling world?

It’s also a long story. With frame building I want to make my own stuff. Because I’ve been a graphic designer for eight years, so I’m used to, how I can say, design my own stuff. Do something special with my thoughts, with imagination, then I tried to find a way how, I wanted to be a craftsman, to do something with my hands, but not be an artist to make an object. The bicycle frame is the perfect object. I don’t have to be an artist, what I make is just part of a bicycle. And this is where I found a way for what I would like to do until I die. 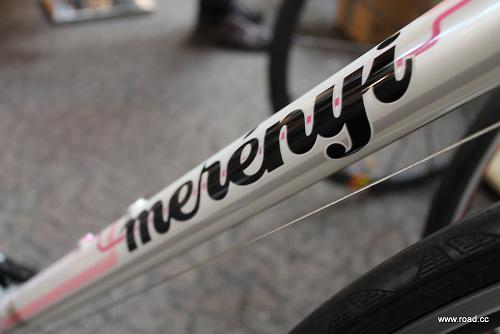 So you see it as a creative outlet for your thoughts and imagination?

Yes. But still what you are making is industrial, working with metal is really nice. I think nowadays young people does a lot of things you cannot touch or feel. When you do something from bare tubes, making a frame is, it’s creating something, this is really rare. I think a lot of people are frustrated, an email you cannot touch

We live in a digital world?

Yes. People can work on their Facebook profile for hours

The interview is being conducted in front of one of Daniel’s creations, a Burletta. I prompt him to tell me about this frame.

This frame is as Burletta the name came from Burla, it’s an Italian word for a short type of opera, means tricky, or jokey. And I chose this name because the frame is tricky a little bit, it’s a classic, with lugs. I’ve used larger diameter tubes, 35mm downtube, 31.7mm top tube, so it has a much more modern performance. It’s tricky because it looks like an old construction, but the performance is modern. And it’s made from Columbus Zona tubeset, we can it from Spirit. Do you have a favourite tubeset?

I like [Columbus] Zona very very much. especially because in our country, Hungary, we have very rough roads, so the Zona, it’s not the lightest, but it’s very smart. You can get a really lightweight frame. I build from Spirit if someone wants. So choosing tubeset, choosing geometry, the colour, we make everything custom. We cannot even copy the paint scheme.

You don’t have a choice of off-the-shelf colours?

No. The first question is what is your favourite colour, then we make some design, it’s a discussion with the customer, what he or she wants, at the end we paint it, and everyone is happy. What are your plans for the future?

Thanks to Dániel for taking the time to have a chat to road.cc. You can find out more about his lovely frames by visiting his website at www.merenyi.eu